teleSUR's correspondent in Los Angeles interviewed Bernie Sanders supporters at the candidate's Super Tuesday Watch Party, as the early results saw him win the biggest state of the country.

I voted for Bernie because, as someone who definitely leans left at the very least, I think he’s the only one who has a coherent strategy, the potential to actually mobilize millions of people to pressure the government at every level possible.

Every candidate advertises how good they are as individual - “I am competent, I care about people, I’ve done this and that” while Bernie says “I am an individual, I’ll be trapped by Republicans, Democrats, big business, and other powers that be, but as long as I’m bringing in people up and down the ballot along with mass movements of people to strike, increase employee ownership, that’s where real social change comes from." 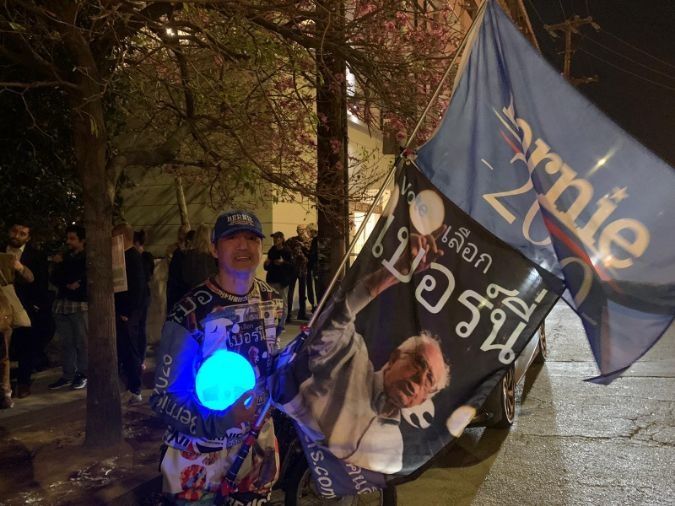 I think his thinking manifests in policies like removing student debt and medical debt in order to give people a better economic foundation, as well as the U.S. employee ownership bank, which represents an incredibly fascinating premise of increasing union power and worker power, which I don’t think other candidates are even thinking of through that lens. They just think about how to appeal to certain social groups in that cerebral way without actually going out and talking to people, who have sometimes mixed very views or non-ideological views but they are hurting in very specific ways and Bernie knows how to speak to them.

He’s the only one who’s had a really positive foreign policy, while others either continue the U.S. hegemony or are being abstract about it, Bernie is the only candidate who condemned the coup against (Bolivian President) Evo Morales, like you shouldn’t lead a coup against (Venezuelan President Nicolas) Maduro even if you have critiques on him, you can’t kill a government official in Iran just because he’s a 'bad dude,' and he sees a way of curtailing U.S. hegemonism by increasing worldwide cooperation. 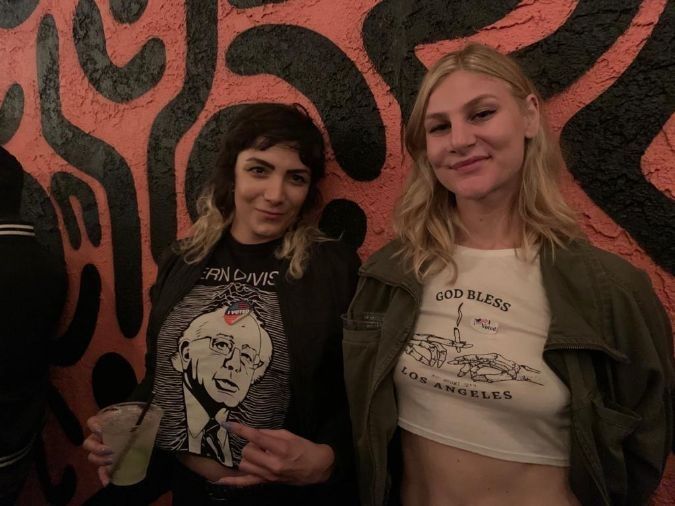 My mum was a teacher in a public elementary school, I watched her spend her own money on buying lunches for her children, making sure they had adequate school supplies and even in certain situations, having to intervene in the social services department because there weren’t the appropriate resources being allocated to making sure children were being taken care of, especially children in the public welfare system and the foster care system.

Public education is lacking a lot of funding, a lot of attention, from people who have the ability to make a real change. There are extremely underprivileged districts where children are learning from textbooks that are out of date, and the information isn’t reputable and it’s not right, it’s not fair. So that’s my number one thing, hearing from my mum who is a Nevada voter, as a woman, you know she inspires me a lot, she’s always been a big Bernie supporter and it was important to me to upload the values that she has because of course, she has a different perspective than myself as someone who’s worked with underprivileged children.

Number two, obviously I’m a freelance, I live in Los Angeles, I have no health insurance, my sister here has no insurance, I think I don’t know that many people who have health insurance and we’re just on this healthcare plan of 'well either we’ll get better or… we’ll just die.'

And I hear Bernie talk about if you are putting money behind public health, it will get better in the long run because people will rely on preventive medicine and so the need for long term care and chronic health issues will diminish and the public health expectations, the bare minimum, well the bar is raised, people will start taking better care of themselves and be able to hold companies accountable for the public health risk that they represent in our communities especially marginalized ones. 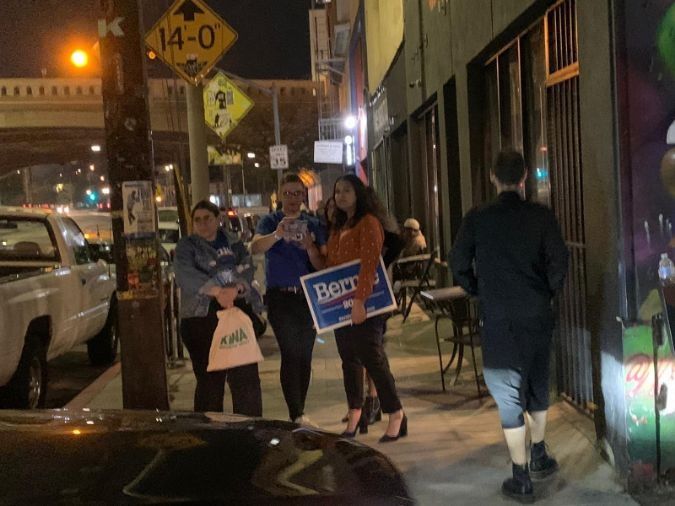 And Bernie is always thoughtful about marginalized communities, like reforming our justice system (my number three). The prison industrial complex is extremely bad - darker skin equals criminality, it’s wrong and it’s embarrassing and we should know better by now.

Number four - I think but I swear this is my last one! - our immigration policy is shameful, we are so xenophobic and so afraid of what we don’t know, how quickly people forget that literally where we are standing right now used to be Mexico, like, you cannot cage people for seeking a better life.

Other countries offer asylum to people who are fleeing from a terrible situation, we are supposed to be a land of opportunities and instead, we are turning our backs to people and wrongfully incarcerating people. This needs to be completely reformed and frankly the fact that we’ve been continued to ignore this as an issue just increasingly adds to the xenophobia in this country. 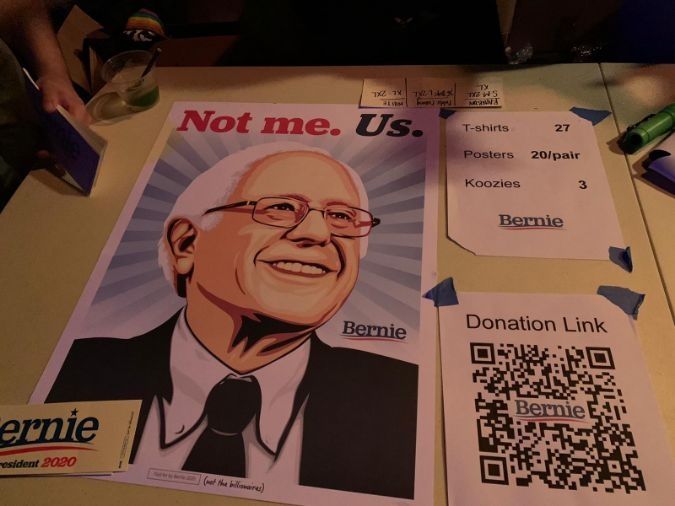 George Gillis (his name has been changed), 30, dealer of vintage goods online and Bernie supporter who doesn't have the right to vote yet.

The main reason I support Bernie is that he’s an activist, a fighter, he wants medicare for all, he supports a immigration reform and he wants to take on Wall Street.

Born from Mexican parents, I have been here since I was three months old and I have never felt more nervous about my status as of today in the United States. I got denied my green card about a year and a half ago and I have been fighting the decision in court since then.

My lawyer wouldn’t even disclose my current address out of fear for deportation. Trump’s immigration policies are very aggressive and difficult, and I believe Bernie’s approach would make it much easier for people like me.

I just got denied a fee waiver a week ago (while most people I know used to be granted one) and now have to pay the full fees to have my immigration request processed and I had to get a lawyer - which is very expensive. In the meantime, this limits my ability to find legal employment, and pursue a carrier in entertainment as I wish. These elections are very important and even my lawyer couldn’t stress enough that Trump needs to lose, it’s becoming almost impossible to immigrate legally.

Most of the other candidates are old-money politicians and Bernie’s had his boots on the ground since the 1960s. Sanders has been standing up for gay people, trans, African American and Latinos for so long. I’m sure that if he does not get elected there will be a record number of people who won't vote because none of the other candidates resonates with them, especially young people. 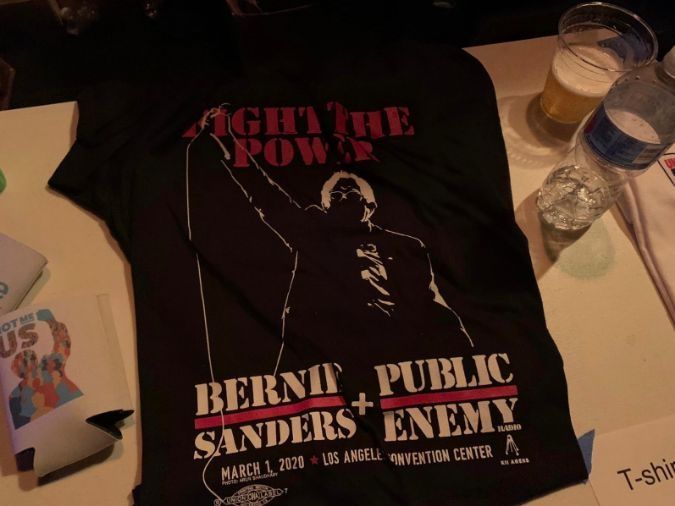 Last but not least, while Los Angeles is supposed to be a progressive city, its criminal justice system is incredibly racist and the current district attorney is disastrously bad at her job. She’s never prosecuted any cops involved police killings, like the case of rapper Drakeo: he’s probably the best rapper in Los Angeles right now and he’s been in jail for two years on zero grounds and Jackie Lacey has been the one who filed the charges. Free Drakeo!