Mass movements from across the Philippines have staged huge protests across Metro Manila to protest the ASEAN summit and the visit of U.S. President Donald Trump, sparking massive repression by Philippine National Police personnel tasked with guarding the summit.

Describing Trump and Philippine President Rodrigo Duterte as “fascists with unparalleled disdain for human rights,” movements such as national democratic youth group Anakbayan say Trump's visit will further cement the neocolonial relations between the United States and the Philippines.

Accusing the Philippine president of dependency on the United States, the group also say Trump's visit will provide a green light to Duterte's attacks on the people, bolster a neoliberal economic agenda that will rob the country of its sovereignty, and further militarize the country as the region experiences heightened military tensions.

"Trump is bringing the Asia-Pacific onto the brink of nuclear war with his stepped up provocations against North Korea. But Duterte is all too happy to drag the Philippines into another U.S. war of aggression to please his idol and puppetmaster Donald Trump," said Anakbayan Secretary General Einstein Recedes.

Anakbayan National Chairperson Vencer Crisostomo denounced the summit, accusing it of pushing for the removal of constitutional limits to foreign ownership of land, utilities, and other industries.

Crisostomo was among 20 protesters who were attacked by police Sunday as protesters fought back against police attempts to disperse demonstrators. While the protesters were bloodied, none of them sustained life-threatening injuries. Several paralegal observers from human rights group Karapatan were also detained by police as they attempted to drive their van to the protest, suffering physical abuse and the theft of their personal belongings during the arrest.

"Who do we expect to guard a human rights violator, fascist, and bigot like U.S. President Donald Trump?” asked Karapatan Secretary-General Cristina Palabay. “None other than his fellow fascists, personified by our own police force.

On Monday, Trump and Duterte will hold talks Monday in a widely-anticipated meeting on the outskirts of the ASEAN conference. Among the topics to be discussed is the contentious issue of human rights.

“We expect Trump to talk about human rights with such a record? This is a different level of shamelessness, hypocrisy and pretense,” Palabay said.

“The Trump administration is allocating more for the destruction and plunder of nations, with $US5.7 billion requested by the U.S. Defense Department for foreign military servicing to fund U.S. interventionist wars all over the world, alongside shoving their version of ‘democracy’ down peoples’ throats – no doubt an arrangement where subservience and puppetry to US demands remain the order of the day,” she added.

On Sunday Duterte serenaded the former reality television host with a love song following what he called “the orders of the commander-in-chief of the United States."

“The imperialist chief’s visit will altogether trump Duterte’s claims of upholding an independent foreign policy and prove it to be an empty brag. Duterte has largely proved himself to be subordinate to U.S. policy dictates,” said the Communist Party of the Philippines Information Bureau, which remains banned.

“The Filipino people must confront the Duterte regime’s subservience to U.S. imperialism, particularly, its counterinsurgency doctrine and 'war on terror' which serve as pretext for (the) U.S. military presence, intervention and control of the Armed Forces of the Philippines,” the CPP continued. “They should also denounce the regime’s push for all-out economic liberalization in order to comply with U.S and China dictates and attract foreign investments.” 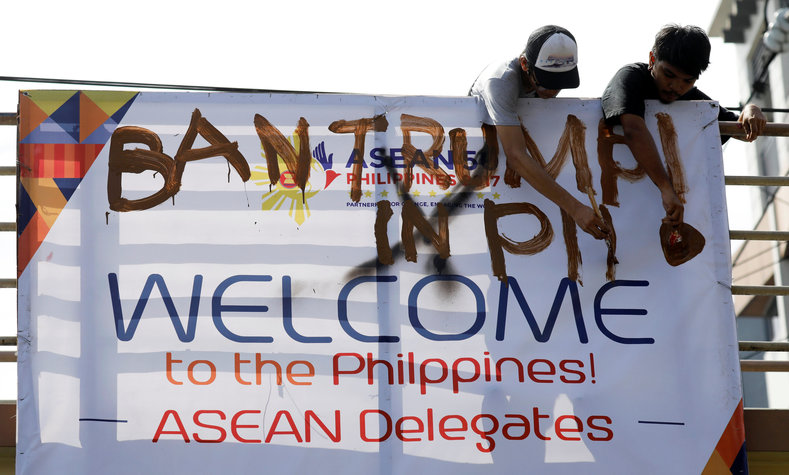 Anti-Trump protesters deface an ASEAN poster as they oppose the planned visit of U.S. President Donald Trump who is attending the ASEAN leaders summit in Manila, Philippines November 7, 2017. Photo:Reuters 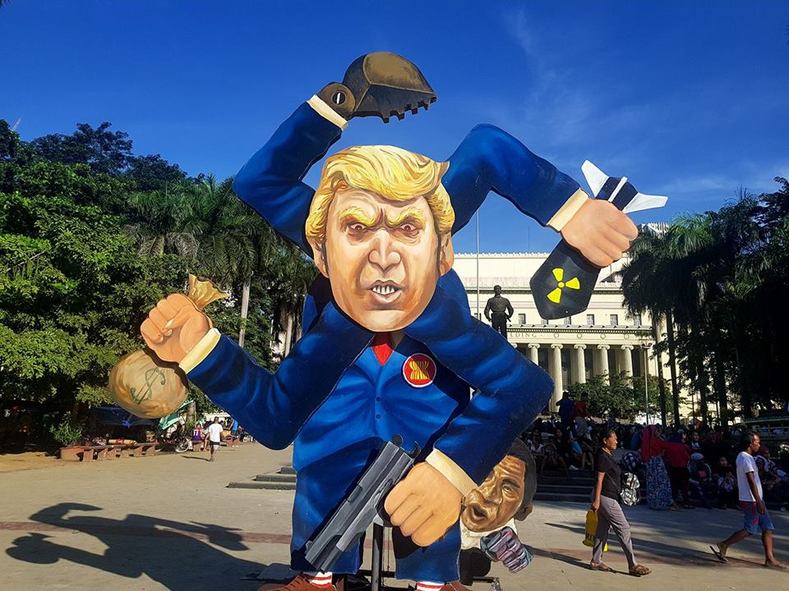 "The 13-foot Trump Effigy has rolled out in Manila. His four arms form a swastika sign, symbolizing fascism, war and plunder. Who's that hiding behind his leg? The arms rotate, a 'fascist spinner' according to artist group Ugat Lahi." - Nato Reyes, BAYAN Photo:Max Santiago 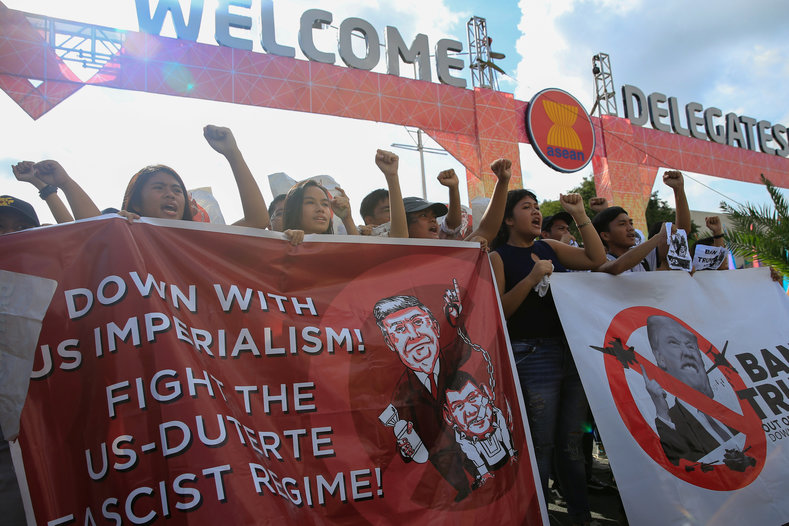 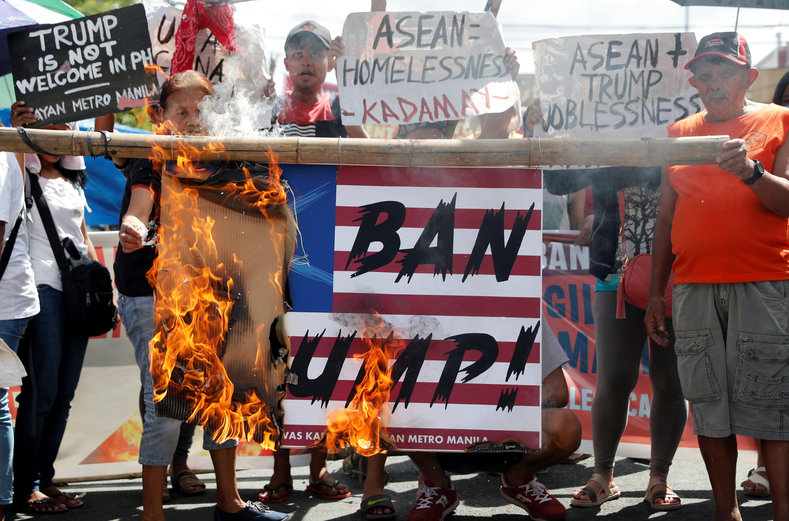 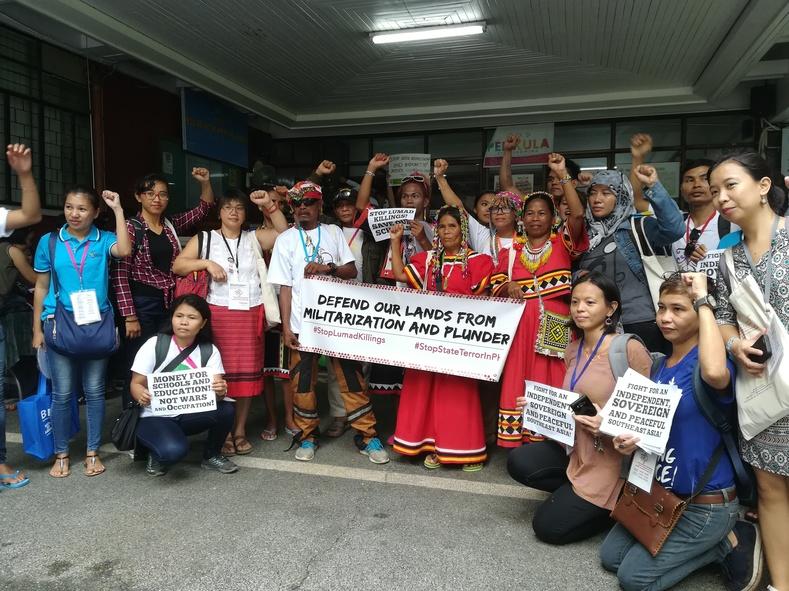 Protesters demand an end to attacks on Indigenous Peoples (IPs) across the Philippines. Photo:IBON International 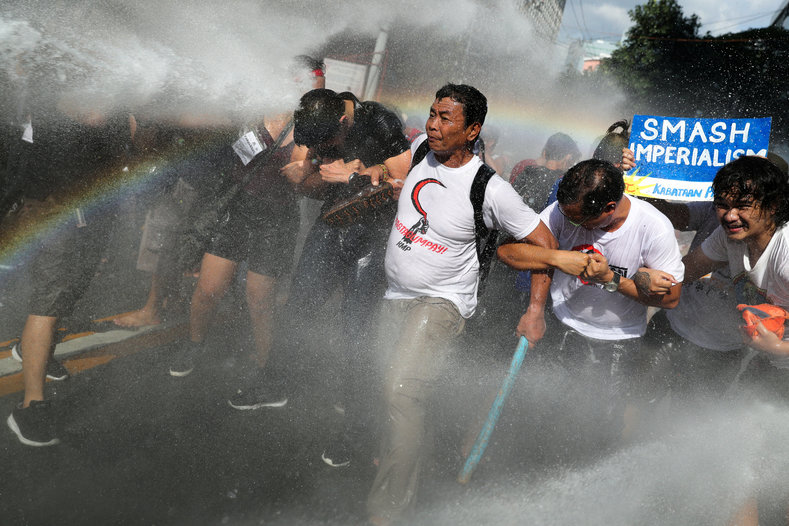 Protesters are hit by a water cannon as they try to march towards the U.S. embassy during a rally against U.S. President Donald Trump's visit, in Manila, Philippines November 12, 2017. Photo:Reuters 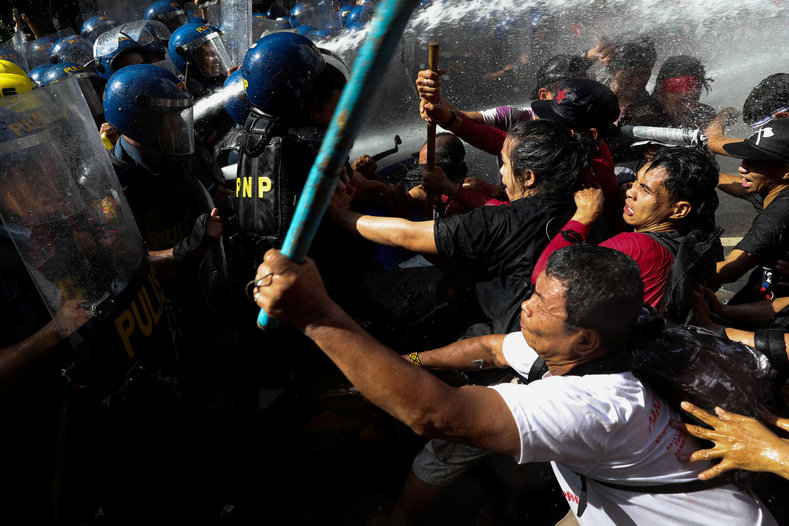 Protesters fight back against tactical police officers as they try to march towards the U.S. embassy during a rally against U.S. President Donald Trump's visit, in Manila, Philippines, November 12, 2017. Photo:Reuters 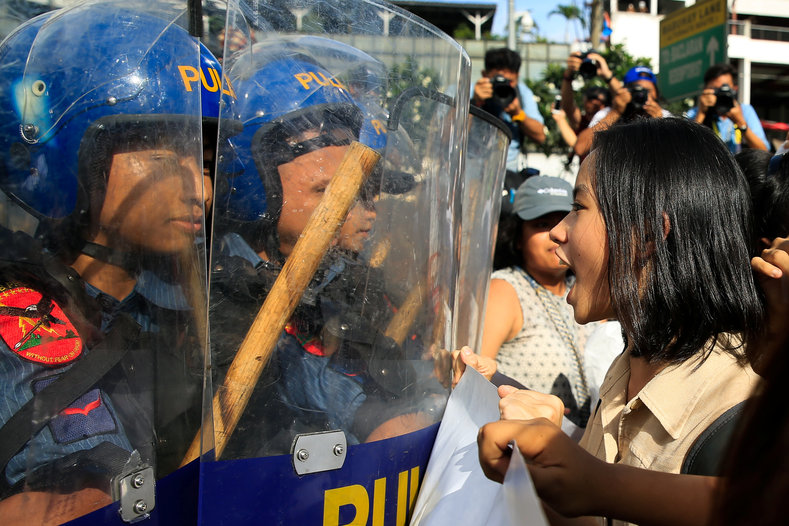 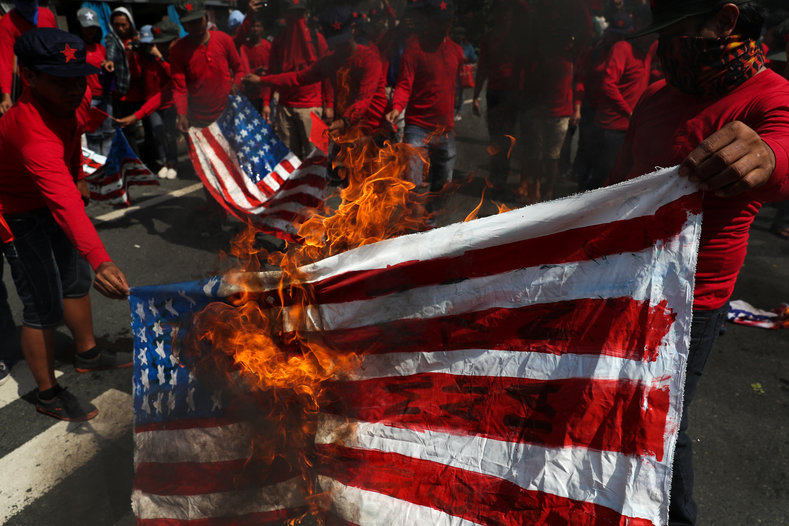 Protesters burn homemade U.S. flags to denounce the visit of U.S. President Donald Trump, who will attend the 31st Association of Southeast Asian Nations (ASEAN) leaders summit, during a protest along a main street in metro Manila, Philippines, November 12, 2017. Photo:Reuters 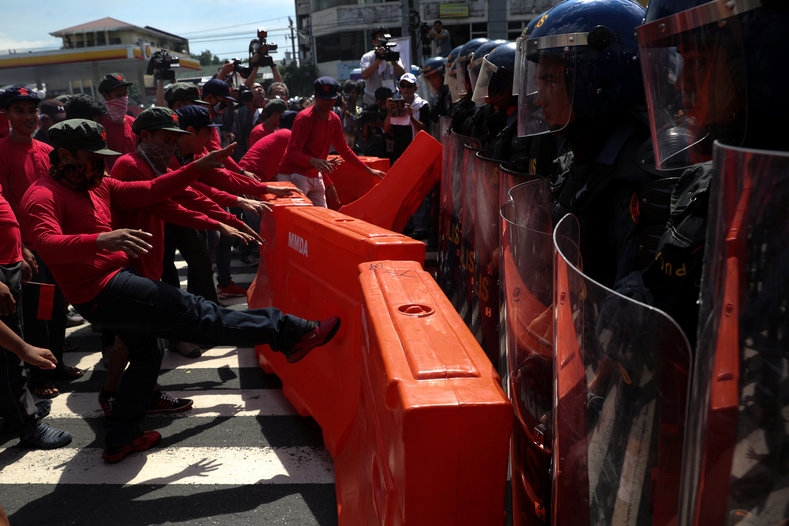 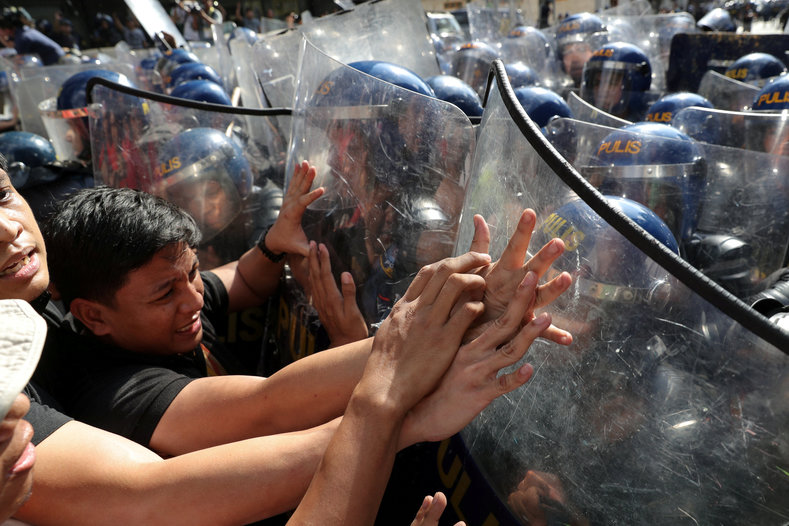 Protesters clash with tactical police officers as they try to march towards the U.S. embassy during a rally against U.S. President Donald Trump's visit, in Manila, Philippines, November 12, 2017. REUTERS/Athit Perawongmetha Photo:Reuters 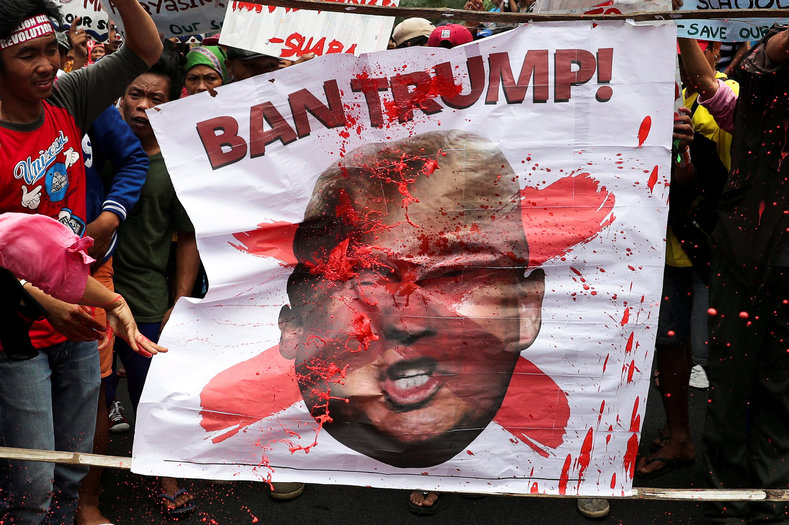 Protesters throw red paint to a picture of U.S. President Donald Trump during a rally against his visit in Manila, Philippines, November 11, 2017. Photo:Reuters 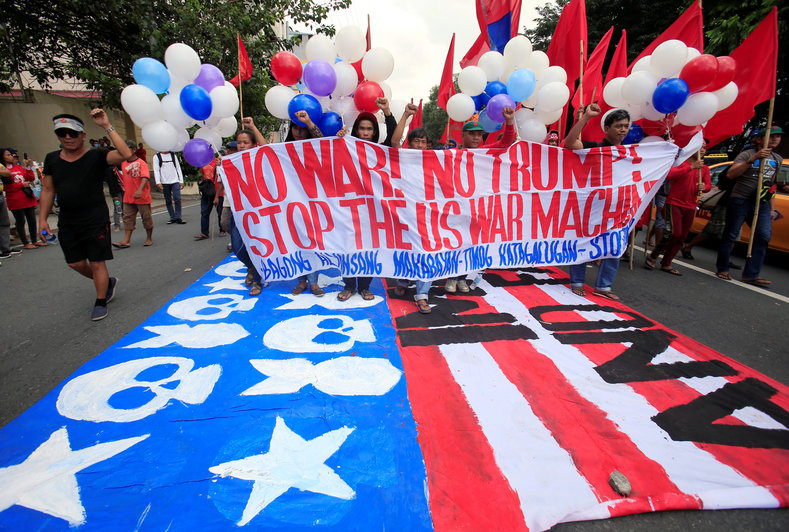 Protesters display a banner during a protest to denounce the visit of U.S. President Donald Trump, who will be attending the 31st Association of Southeast Asian Nations (ASEAN) leaders summit, in metro Manila, Philippines November 12, 2017. Photo:Reuters 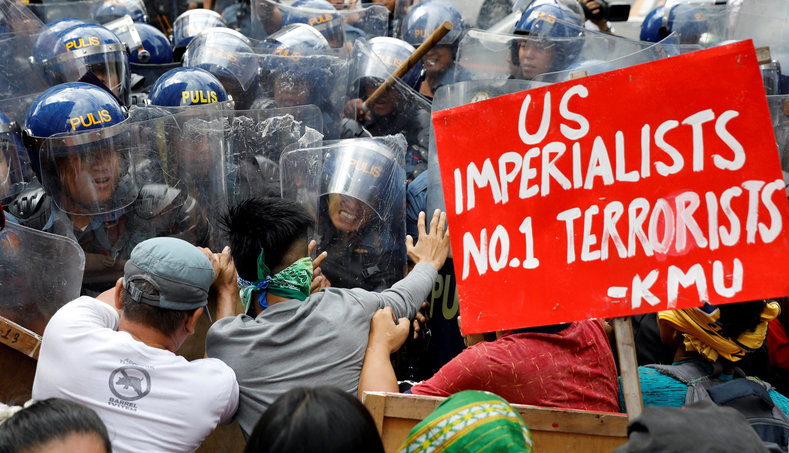 Protesters clash with tactical police officers as they try to march towards the U.S. embassy during a rally against U.S. President Donald Trump's visit, in Manila, Philippines November 10, 2017. Photo:Reuters 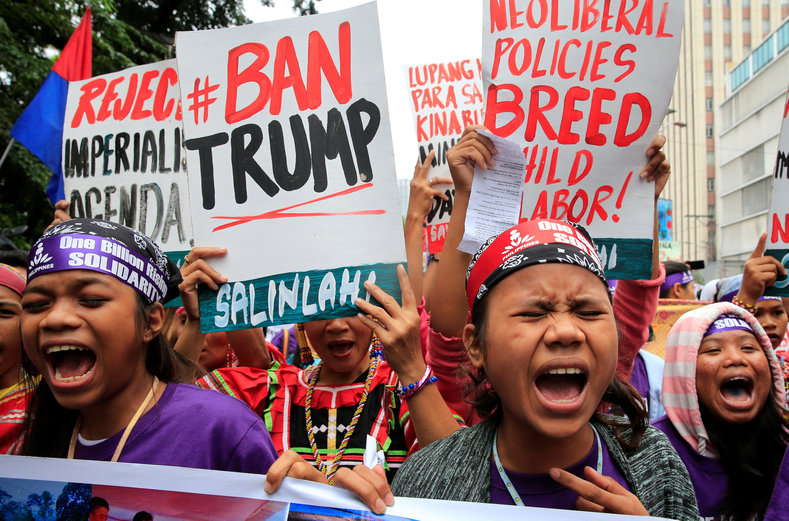 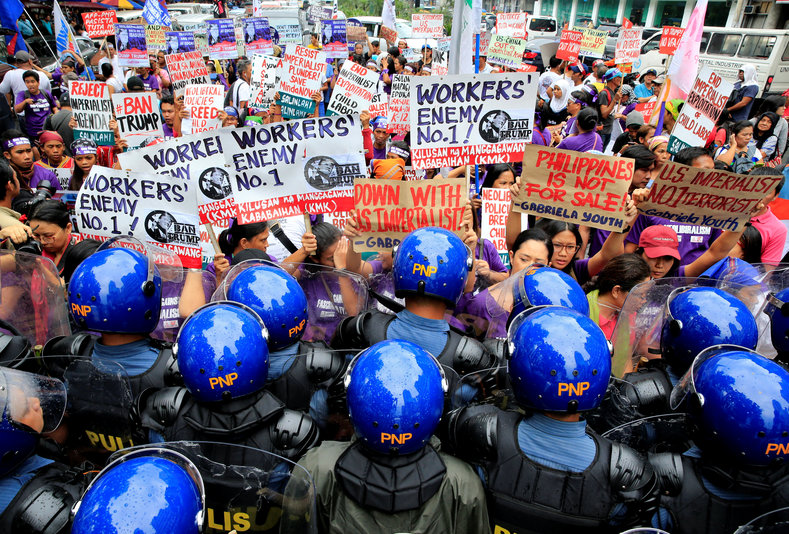 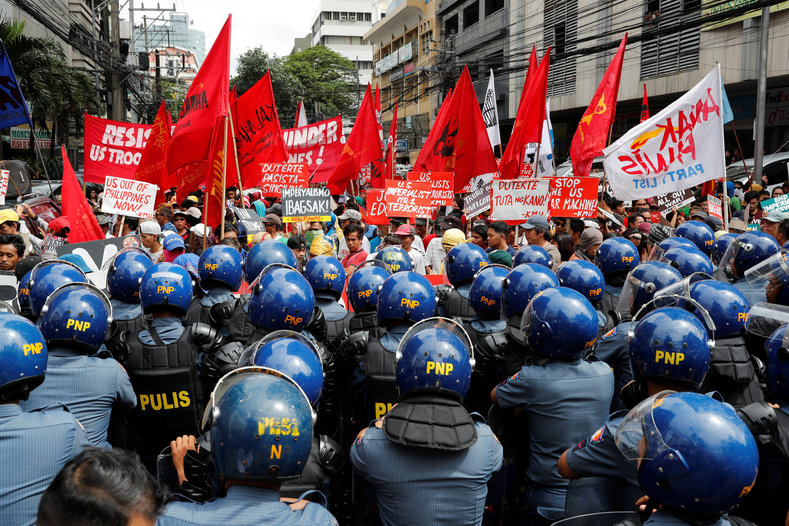 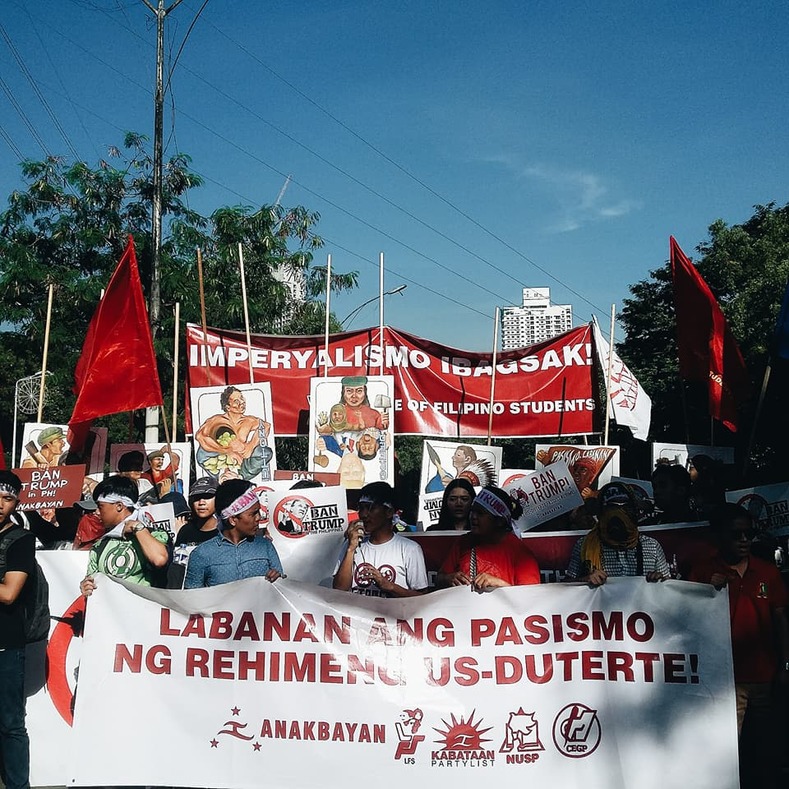 "Youth groups led by Anakbayan welcome the second day of ASEAN 2017 with a militant protest condemning the continuing imperialist plunder led by the U.S. and its president Donald Trump." Photo:Anakbayan 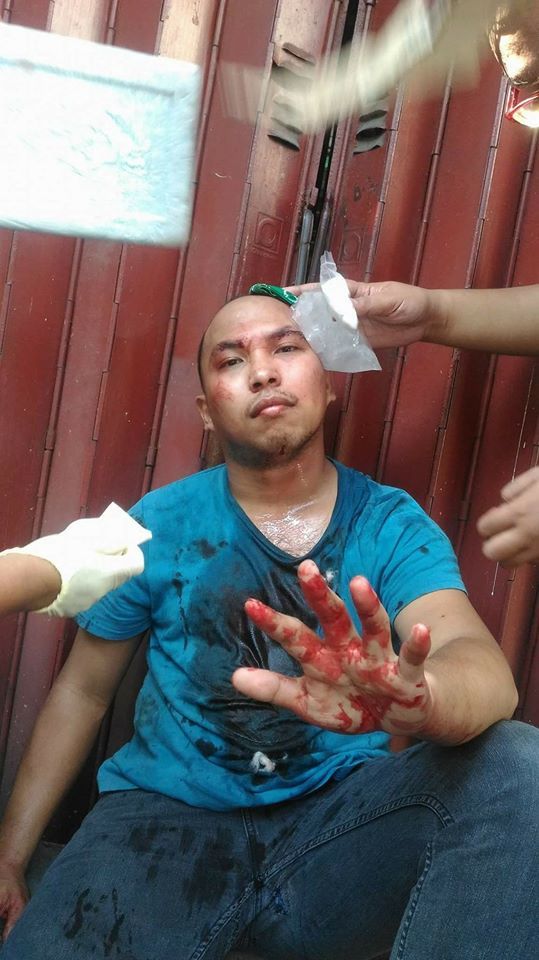 "More than 20 injured at Manila protest vs Trump. Police used water cannons on protesters. One activist arrested. Trump arrives today in Manila. We condemn in the strongest terms the state fascism that has been imposed on Filipino protesters. The protests are justified. Trump is an enemy of the people. He is a fascist and a racist who supports other fascist regimes." Photo:BAYAN