The five people confirmed to be sick with the coronavirus will be evacuated from the ship, a UK diplomatic official confirmed.

The almost 700 passengers on board the British cruise ship MS Braemar, with at least five confirmed cases of COVID-19 on board, began disembarking on Wednesday at the Cuban port of Mariel, 45 kilometers west of Havana.

RELATED:
US Should Lift Sanctions to Avoid More Deaths From COVID-19

During the disembarkation, dozens of passengers assembled on the decks and along the railings of the ship waving, throwing kisses and displaying signs thanking Cuba for allowing the vessel to dock, after several other Caribbean ports refused to allow the ship to obtain access.

The passengers will be transported on buses to an airport terminal in the capital where they will board four charter flights made available by the British government that will take them to London’s Heathrow Airport. At the same time, the majority of the vessel’s 381 crew members will remain on board to return the ship to its home port.

Besides the five confirmed COVID-19 cases on board the ship, there are 28 travelers and another 27 crewmembers – among them a doctor – who has been isolated after experiencing flu-like symptoms, which are virtually identical to symptoms of the virus.

Earlier this week, The Bahamas allowed the ship to anchor about 25 miles offshore so that it could be resupplied with food, fuel, and medicines.

According to Cuban media, the docking of the vessel at Mariel was undertaken “complying with the health measures established by the World Health Organization and the Public Health Ministry.”

The Braemar entered the port at dawn, but the disembarkation did not commence until a few hours later at about 1 pm. 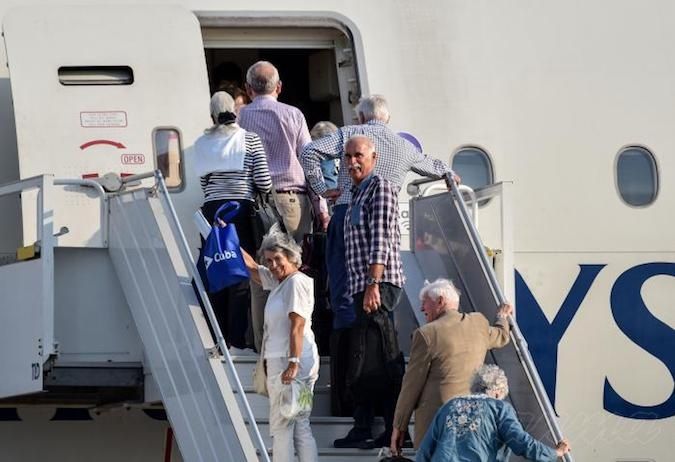 Britain’s ambassador to Cuba, Anthony Stokes, said he was “very grateful” to the island’s government for allowing the cruise ship to dock and for cooperating with his country in the evacuation of the passengers after a “difficult and uncertain” journey.

He said that Britain was determined to protect the health of passengers, the crew, Cubans, and everyone who is working on the disembarkation, the diplomat added in a video he posted on the UK Embassy’s Twitter account.

“On the issue of cruises, we’ve been working intensively with the Cuban authorities (…) to ensure that all of the British nationals are able to return quickly and safely to the UK (…) within the next 48 hours,” UK Foreign Secretary Dominic Raab said.

“We are very grateful to the Cuban government for swiftly enabling this operation and for their close cooperation to make sure it could be successful,” he added.

Participating in the disembarkation and transport operation is a caravan of buses and ambulances that will head directly to a Havana airport terminal that does not regularly handle commercial flights.

The evacuation comes on the same day that Cuba reported its first death from COVID-19: a 63-year-old Italian tourist who was one of the first three cases detected on the island.

According to the latest report from the Cuban Public Health ministry, there nine cases have been confirmed – 10, if one counts the man who died – on the island and 389 people have been hospitalized for observation after displaying flu-like symptoms.

Cuba has kept its borders open and continues to allow the arrival of flights from the areas around the world that have been hardest hit by COVID-19. Havana authorities say that it will certainly continue to welcome tourists and to monitor the health status of all travelers who enter the country.