Nov. 9 marks the 47th anniversary of Fidel Castro's historic visit to Salvador Allende's Chile. Two of the most committed and beloved socialist leaders in Latin America met to discuss the revolutionary processes in their country, which were different but equally important in terms of their defiance to corporate United States hegemony. For over three weeks, between Nov. 10 and Dec. 4, 1971, they discussed the advance of socialism, the obstacles they faced, and the threat of a counter-revolution. 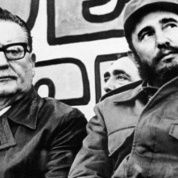 Lucky for us, the encounter of these great minds was recorded.

The conversations were facilitated by Chilean journalist Augusto Olivares, loyal to Allende's democratic and socialist process until Sept. 11, 1973, when a U.S.-backed military coup culminated in the murder of Allende and Olivares and marked the beginning of one of Latin America's bloodiest and most repressive regimes, the military dictatorship led by Augusto Pinochet (1973-1990).

"I'll tell you one thing: the hand of Imperialism is behind all that, without any doubt. I tell you that we have enough experience with how it acts," Fidel told Allende, explaining the attacks against Cuba and Chile that were orchestrated during the visit. Imperialism, or the political and economic structure that ensures the dispossession of the masses by transnational capital, aimed to stop the "dialogue between us and the meeting between our peoples and our processes," Fidel argued.

Today, after two decades of left-wing or national-popular governments in Latin America, we are witnessing the restructuring and rise of the right-wing. From 1998, after the electoral triumph of Hugo Chavez Frias, to this date, 14 left-wing governments were democratically elected. However, 20 years later, at least 10 of them have been ousted either by institutional coups, media-skewed elections or through "lawfare."

In these times of uncertainty, marked by a rise of right-wing governments backed by transnational capital that govern for the few instead of the many, in a context of an Imperialist counter-offensive, the conversation between Allende and Fidel sheds light on possible paths to overcome the current tide.

"The truth is that we have to consider that Cuba and Chile are the vanguards of a process that has to reach the rest of the Latin American peoples," Allende told Fidel. "This continent has in its belly a creature called Revolution, which is on the way and that inexorably, by biological law, by social law, by the law of history has to be born. And it will be born one way or another," Fidel added, predicting  transformational processes of social justice for Latin America. It took time but organizing and resisting the eighties and nineties' neoliberal onslaught enabled the emergence of national-popular and redistributive governments.

RELATED:
ALBA Denounces The Return of US Imperialist Monroe Doctrine

To find our way back it is useful to reflect on certain lessons. Both leaders argue that the people of every country, who fight for emancipation, have to find their own path, "adapting the tactics and strategies that will lead them to transformations to their own reality," said Allende. In the case of Cuba, "the guerrilla armed struggle that a small group of men started is something like a small engine that allowed to start the great engine of history (...) which is the struggle of the oppressed masses, against its oppressors," replied Fidel.

In Chile, it was different. Allende captured the state not through arms but through the vote in a feat that was not only electoral but political. The Popular Unity that backed him was a far-reaching alliance among workers, intellectuals, Campesinos, Indigenous peoples, artists, and more. In the year 1970, in Chile, a democratic ascension to power was a possibility. In the 1950s, in Cuba, dictator Fulgencio Batista had undermined all democratic institutions.

Understanding the particularities of each society to think of any process of social and economic transformation for the masses remains an urgency today for Latin American movements. The same is true for the necessity of guaranteeing the people's backing and a broad, inclusive definition of the "people". Allende specifically highlighted the importance of "a vast and broad mass movement that would allow the structural changes of Chilean life."

Another central lesson is to identify the enemy. Fidel unequivocably identified Imperialism as the real enemy. "They have used political weapons, military weapons, economic weapons, but we have managed to develop a very united people, in which there is no dispersion factor, there are no elements of division, we have created a great equality, a great unity," Fidel said of the importance of the masses in revolutionary processes. Unity as the best defense against interventionist strategies.

Allende also warned of the henchmen of imperialism, the Chileans, Cubans and other Latin Americans who are interested in keeping the exploitation systems in place: "In the first place an oligarchy with a lot of experience, intelligent, that defends its interests very well and that has the support of Imperialism, within the framework of an institutionality."

Those are the oligarchs that refuse to give up their "birthright" to land and political influence, the national bourgeoisie that boycotts any national industrial development out of fear their lucrative export-import businesses might crumble.

Allende also explained the importance of integration between the Latin American people, and why there are forces trying to break said unity. "They are aware of the consequences of vitalizing the Latin American revolutionary process. They have the evidence that the unity of our peoples is an indisputable factor that strengthens the will and the decision of the peoples to break the dependence."

Unsurprisingly, the left-wing governments of the region strove to create regional integration bodies, not only for trade but for social development and political unity against common threats.

The two also discussed the important role played by for-profit media corporations that also have interests in play. They use "a freedom of the press that is so much more than freedom of the press, it's a debauchery of a press. It distorts, lies, slanders, delays. The media they rely on, are powerful: journalists tied to foreign interests and big interests nationally. No. Not only do they not recognize, but they distort our initiatives."

As if he was predicting the future, Fidel warns that the right-wing uses "a procedure that we describe as Fascist and that therefore try to gain mass, with the demagoguery if possible of the most backward sectors of the humble layers, and gain mass in the middle classes."

"And so there will be an issue left to prove: will those interests give up passively towards the structural changes that the Popular Unity and the Chilean society have wanted to carry forward? It is to be expected if we are to analyze this issue theoretically, that they will resist. And they will resist strongly and even resist violently."

This warning was made by Fidel to Allende and to Chile, predicting that Imperialism and the forces that were losing space and power due to the structural changes carried out by the Popular Unity government would strike back, as they eventually did.

Imperialist forces and oppressors "maintained their systems through violence and they defend them through violence," Fidel added. Generally the obstacles for revolutions "are from an exterior order, because we hit immediately with the Imperialist interests," he added.

Effectively the "counter-revolutionary" forces used violence to put an end to the "Chilean way."

"And I will fulfill the mandate that the people have given me. I will fulfill it relentlessly. I will comply with the program that we have promised the political conscience of Chile. And those who always unleash social violence, if they unleash political violence, if fascism intends to use the means with which it always devastated those who tried to make the Revolution, will find our response and my implacable decision. I will finish as president of the republic when I fulfill my mandate. They will have to fill me with bullets, as I said yesterday, to stop me from acting," Allende warned those who conspired against popular will.

And that is how it played out. Soldiers led by Pinochet had to bomb Chile's presidential palace, La Moneda, and kill Allende, to stop him from leading the social and economic transformation, from nationalizing natural resources, from promoting land reform. In relation to Fidel, imperialist forces carried out 638 failed assassination attempts, Fidel finally died of old age and the Revolution remains.

Allende's last words to the Chilean people, while he was under military attack were:

"I am certain that my sacrifice will not be in vain (...) Workers of my Homeland, I have faith in Chile and in its destiny. Other men will overcome this gray and bitter moment in which the betrayal tries to impose itself. Keep on knowing that, much sooner than later, the great avenues where the free man walks will once again open up to build a better society."