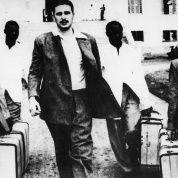 Cuba’s Socialist revolutionary leader Fidel Castro delivered a stirring speech titled “History will Absolve Me” this day, 65 years ago, during his own defense for the attack on the Moncada Barracks, which sought to inspire Cubans to join the insurrection against military dictator Fulgencio Batista, who had terrorized the population since 1933 when he led the overthrow of provisional President Carlos Manuel de Cespedes.

The attack failed after a prolonged battle between the rebels and Batista's army. Dozens of rebels were executed after the battle had ended, some were taken prisoners, and others were tortured.

Castro, who initially fled to the Sierra Maestra to avoid being captured, was later arrested. In prison, he was denied the right to meet with his lawyer Jorge Pagliery in private; their only meeting was supervised by a member of Cuba’s military intelligence. In this context, Fidel decided to represent himself.

In his defense, Castro began with a scathing indictment of the court’s actions.

1. Due to fears of what Fidel would denounce, the hearing on his case was held in a hospital room kept away from the public eye, to which Fidel said:

“It is not convenient, I warn you, to bestow justice from a hospital room surrounded by guards with bayonets because the citizens might think our justice is sick … and imprisoned.”

Batista was right to fear a public hearing. Fidel spent a good part of it detailing the atrocities committed by the army after the battle was over.

2. In a rebuke of Batista’s claims that the rebels were military experts to justify how so many of his men perished in the battle, Fidel stated:

“That is how the people fight when they want to conquer their liberty: they fight planes with stones and they flip tanks upside down.”

3. Castro also provided a beautiful definition of "the people," to explain who the Revolution was for:

“When we talk about the people we are not referring to the well-off and conservative sectors of the nation, for whom any repressive regime, any dictatorship, any despotism is convenient; who kneel before whichever master. … What we understand by "the people," when we speak of the struggle, is the great unredeemed mass, who get cheated and betrayed, who long for a better, more dignified, more just homeland … who are moved by an ancestral thirst for justice because they have suffered injustice and have been mocked generation after generation...”

4. Throughout his defense, Castro did not deny having led the attack.

“Demagogues and professional politicians want to make the miracle of being good in everything and with everybody, necessarily fooling everyone in everything. Revolutionaries will proclaim their ideas bravely, define their own principles, and express their intentions to deceive no one, neither friends nor foes.”

5. Later he explained the need for a Revolution describing a deeply unequal distribution of land.

“Over half of the best productive cultivated lands are in foreign hands ... the United Fruit Company and the West Indies join the northern and southern coasts. There are 200,000 Campesino families that do not have a yard of land to plant food for their hungry children, yet vast amounts of productive land remain uncultivated in the hands of powerful interests.”

6. Castro also described the appalling conditions his fellow Cubans were forced to live in.

“One can only be freed of so much misery through death; and the state does help with that: with death. … Society is shaken with the news of the kidnapping or murder of a child, but remain criminally indifferent with the mass murder of so many thousands upon thousands of children who die every year due to lack of resources, agonizing among the death rattles of pain, and whose innocent eyes, already bearing the glimmer of death, seem to look towards the infinite like asking forgiveness for human selfishness.”

7. Afterward, he scolded the magistrates of the court for failing to deliver justice.

“You send the unfortunate man who steals due to hunger to jail, but none of the hundreds of thieves who have stolen millions from the state has slept one night behind bars: you dine with them on new year’s in some aristocratic place, and they have your respect.”

8. On Justice for his comrades, Fidel told the court:

“It is not with blood that you can pay for the lives of those who died for the wellbeing of a people; the happiness of that people is the only deserving price that can be paid for them. Moreover, my comrades are not forgotten nor dead; they live today more than ever and their murderers will see in terror how from their heroic corpses the victorious specter of their ideas rise.”

9. Castro later questioned the integrity and valor of the court's justices, reminding them that as a younger man he had requested the judicial power to try Batista for crimes against the Republic.

“You will tell me that on that occasion the Republic's justices did not act because force prevented it. Then confess: this time force will also oblige you to condemn me. The first time you couldn’t punish the guilty; the second, you will have to punish the innocent. The maiden of justice, twice violated by force.”

10. He concluded by saying:

“I end my defense. I won’t do it like attorneys always do, asking for the defendant's liberty; I can’t ask for that when my comrades are suffering ignominious prison sentences in Isla de Pinos. Send me to them to share their fate ... I know jail will be hard as it hasn’t been for no anyone else, filled with threats and miserly and cowardly cruelty, but I do not fear it as I do not fear the fury of the miserable tyrant who stripped the life of seventy of my brothers. Condemn me, it does not matter, history will absolve me.”

The court sentenced him to 15 years. After 22 months, the imprisoned rebels were freed by a general amnesty granted by Batista in response to popular pressure. In 1955 Fidel went into exile. A year later Fidel and 82 revolutionaries landed on Cuban shores. Most of them perished in a battle with the Cuban military but Fidel, Raul Castro, Ernesto Guevara, Camilo Cienfuegos, and a few others survived and launched a guerrilla war against the Batista government that ultimately succeeded on Jan. 1, 1959.