As Bolivia was taking on the pro tempore presidency of the Union of South American Nations (Unasur), the governments of Argentina, Brazil, Chile, Colombia, Paraguay and Peru, six of the international body’s 12 member states crafted a letter to Bolivian Foreign Minister Fernando Huanacuni announcing their “temporary” withdrawal. 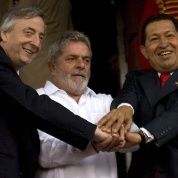 The countries cite the lack of direction and leadership as justification for their decision, but political analysts in the region argue that the timing reveals ideological reasons rather than concerns over Unasur's administrative and operational challenges.

The decision came on the eve of the transfer of the presidency from Mauricio Macri’s Argentina to Evo Morales’ Bolivia; governments that represent two starkly different development and regional integration models since right-wing Macri became President  in December 2015.

Also the decision was announced days after the so-called Lima Group met in VIII Summit of the Americas, held in Lima between April 13 and 14. The ad-hoc group created in August 2017, known for its anti-Venezuela stance and alignment with U.S. foreign policy, decided in February to ban Venezuela, a founding member of the Organization of American States (OAS), from participating in the Summit.

The measure was interpreted by many, including the Venezuelan government as a way to further isolate the South American country as part of an ogning U.S.-led economic and political pressure against President nicolas Maduro.

Last year Canadian Foreign Minister Chrystia Freeland told reporters “we must put added pressure on the Maduro regime by taking concrete steps to further isolate it from the international community."

The Lima Group's controversial decision divided the region into those backing U.S. calls for further isolation of Venezuela, and countries, including Ecuador, Uruguay, Bolivia, Nicaragua, Cuba and Antigua and Barbuda, that upheld the “strict obligation not to intervene, directly or indirectly, in the internal affairs of any other State," a pledge made as part of the Proclamation of Latin America and the Caribbean as a Zone of Peace.

Now through a public and coordinated attack against Unasur, this U.S.-oriented right-wing body is launching a campaign against those left-leaning governments in the region who are resisting the return of U.S. dominance and its interventionist approach towards the region.

While the six South American countries that belong to the Lima group announced their withdrawal from the sole South American integration body, Ecuador, Uruguay and Bolivia have remained committed to the regional body and have called for dialogue.

But while Unasur is not a stranger to ideological differences, disagreements between member states have escalated since January 2017, when former Colombian President Ernesto Samper concluded his term as secretary general. Since then the inter-regional body has been unable to agree on a successor for Samper.

During the two years Argentina held the pro-tempore presidency (2016-2018) it was unable to resolve this impasse, which is now being used as the main reason behind the countries' withdrawal.

ANALYSIS:
Summit of the Americas: Venezuela's Turn to Suffer US Dominance

Argentine legislator Guillermo Carmona believes Unasur is not facing an impasse but rather a calculated attempt to dismantle and replace it.

“During his pro tempore presidency he (Macri) froze its institutional work… Now they attempt to question the bloc’s lack of institutional functioning as a justification for withdrawal when its paralysis was promoted by Macri himself… In replacement of Unasur, Macri has supported the creation of a sort of anti-Unasur, the Lima Group, a club of the regional right-wing in charge of antagonizing popular and progressive governments in the region,” Carmona explained.

According to former Unasur President Ernesto Samper the problem is the existing rule of consensus. Currently any decision must be agreed on by the 12 member countries in order to be adopted, which Samper contends “is what is doing the most damage.”

Joining the rhetoric by Lima Group against the body, Chile’s Foreign Minister Roberto Ampuero of the newly elected government has recently said stated that Unasur, in its current situation “leads to nothing,” and has criticized Bolivia’s agenda to create a “Latin American citizenship” as "theoretical" and irrelevant.

The idea of a Latin American citizenship is not new, as it precedes the creation of Unasur. The first step towards it was taken by Mercosur, Chile and Bolivia in 2002 when they created the “Area of Freedom for Residency and Work” which secures the right to work for these countries’ immigrants as long as they don’t have a criminal record.

Today the policy applies in Ecuador, Colombia and Peru.

The implementation of this policy and its expansion is anything but “irrelevant,” especially considering that the three largest groups of immigrants living in Argentina are from Paraguay, Bolivia and Chile.

The reality of interregional migration is one of the reasons behind Unasur’s existence.

Despite this and other important achievements, such as the establishment of the South American Defense Council, which Parlasur member Jorge Taiana contends has created trust among neighboring countries, news agencies and mainstream media outlets continue to refer to Unasur as an anti-U.S. bloc.

Thus, the potential dismantling of a sovereign regional integration project is being framed as the dissolution of an ideological body with no practical purposes, created by “anti-Washington” governments.

But it wasn’t Hugo Chavez or any other progressive South American leader who laid the groundwork for Unasur.

The process of creating Unasur began in 2000, when the neoliberal government of Fernando Henrique Cardoso organized the first meeting of South American countries, without the presence of the United States.

Sovereign South American integration emerged not out of anti-U.S. sentiment but out of the regional necessity for common social, economic, environmental, defense and foreign policies not subordinated to countries outside of the region.

Sociologist Jorge Taiana explained in a recent interview “in 2000 they (South American countries) were about to reach 200 years since independence and they had never met alone, without the presence of the U.S.,” Taiana highlighted.

Since the mid-nineties, the heyday for neoliberal policies in Latin America, the U.S. has tried to create the Free Trade Area of the Americas (FTAA) as a form of regional integration for trade liberalization.

The 2000 South American meeting led to the establishment of the Community of South American Nations in 2004. The community didn’t flourish, but in 2008 with the key backing of progressive leaders including Venezuela’s Chavez, Ecuador’s Rafael Correa, Bolivia’s Evo Morales, Argentina’s Nestor Kirchner and Cristina Fernandez, and Brazil's Luiz Inacio Lula da Silva, Unasur was created.

Since then, the Union effectively intervened to uphold the democratic order and solve diplomatic crisis among neighbors.

When Rafael Correa suffered an attempted coup by sectors of the Ecuadorean police and military in 2010, Unasur held an emergency meeting that concluded with a warning stating that countries where democracy was threatened by coups would suffer regional sanctions.

That same year Unasur played a vital role in re-establishing diplomatic ties between Colombia and Venezuela after a deep diplomatic and military crisis in the border area sparked by accusations by Bogota that Venezuela was harboring guerrillas.

Furthermore, since 2009 the regional integration body has discussed a new regional security doctrine on debating a prohibition on the installation of foreign military bases in member states.

The surge of right-wing politics and governments in the region as well as the election of Donald Trump in the United States last year is threatening to reverse significant progress that has been achieved in the region over the past two decades, with the main one being Unasur.

Dismantling it could mean the end of a regional defense strategy, of the establishment of a common currency and the end of the South American Bank, projects which sought to consolidate regional sovereignty not only from the U.S. but also independence from international financial institutions, and to promote a more favorable global market participation.