Venezuelan President Nicolas Maduro Moros will be sworn-in for his second mandate (2019-2025) on Thursday, Jan. 10, in front of the Supreme Court of Justice (TSJ) in Caracas. Days before being inaugurated, Maduro has called for unity among Venezuelans and against clear interventionist attempts. "The Bolivarian Revolution is about more that one man: it's about a people that chose to be free,” he tweeted. 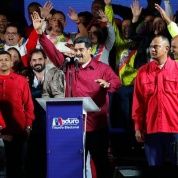 The presidential elections of May 20, 2018,  were carried out under the strict audition and preparation of a non-partisan National Electoral Council (CNE).  The elections called by the CNE, were ratified by all the presidential elections candidates, including opposition candidate Henri Falcon, the United Socialist Party of Venezuela (PSUV) and the opposition parties Avanzada Progresista (AP), Movement Towards Socialism (MAS) and Political Organization of Electoral Independence (Copei). All signed the "Guarantees Agreement," for said elections.

Nicolas Maduro Moros was re-elected as president of Venezuela on May 20, by the majority of the population, with 5,823,728 votes, 67.7 percent of popular support, in a day that marked a 47.02 percent participation. The presidential elections complied with all the parameters of transparency and security of the vote, recognized by the very participating opposition parties and by the high-profile international observers who attended.

The presidential election, which was supposed to take place at the end of 2018, was demanded by the opposition coalition, led by the now-fragmented United Democratic Roundtable (MUD) during the negotiations with the Venezuelan government in Santo Domingo in the Dominican Republic earlier last year. The Venezuelan government accepted to sign the Santo Domingo agreement which contained the majority of the demands made by the MUD.

On the other hand, the chiefs of negotiations of the MUD came under international pressure, mainly by the governments of the United States and Colombia, and therefore refused to sign the final version of the agreement at the last minute. The agreement was backed by renowned international observers, such as Spanish former head of state Jose Luis Rodriguez Zapatero. The advancement of the elections was part of the demands by the opposition forces to open a cycle of dialogue and guarantee their participation in the presidential electoral process for the peaceful resolution of the situation in Venezuela.

According to Zambrano this specific branch of the opposition used strategies to deepen the divides of the Venezuelan people. "Neither the hegemonic attempts, the undemocratic attitudes or denying reality can outlast the economic and social reality," Zambrano said.

These attitudes divided the opposition in Venezuela. Henri Falcon, the opposition's former Lara state governor, was also expelled by the opposition MUD coalition after registering his candidacy in the elections.

Falcon had said then that the conditions were suitable for the elections, making a reference to the "Guarantees Agreement," signed by both opposition and governmental parties.

One of the arguments used by the opposition against the elections is the fact that few popular opposition figures were disquilified from elections.

One disqualified politician is Leopoldo Lopez who can’t run because he was sentenced to almost 14 years in prison for inciting to violence during the deadly 2014 protests. Another one is Henrique Capriles, who ran for president twice and lost. In 2017 Venezuelan ombudsman Manuel Galindo sanctioned Capriles with 15 years of political disqualification over economic irregularities when he was governor of the state of Merida.

Also, the parties that couldn’t participate were not disqualified; they had to go through a process to revalidate their legal status for failing to participate in previous elections, including ANC and local elections.

These restrictions did not amount to an inability to present a unified opposition candidate to reach the opposition’s “electoral solution.”

Henry Ramos Allup, former president of the suspended National Assembly, offered his Democratic Action party to present a “united Venezuela” ticket in late January. Ramos Allup’s party was able to participate because it had successfully completed the revalidation process.

Moreover, the elections in 2018 were made under the same CNE processes applied during the 2015 elections in which the opposition won the legislative majority. In those elections, which had the exact same preparation and implementation process as those of 2018, the MUD chief for electoral issues, stated that the technical conditions given by the CNE were propitious.

The election, the 24th in over two decades since late Venezuelan leader Hugo Chavez was elected and kicked off the Bolivarian revolution, was attended by the African Union represented by the ambassador of the African Union in Washington, Ms. Arikana Chihombori Quao, a group of Russian electoral experts and a delegation of the Council of Electoral Experts of Latin America (Ceela), chaired by Nicanor Moscoso, who has worked with the Organization of American States (OAS) in dozens of Latin American electoral processes.

According to the international observers, "the elections were very transparent and complied with international parameters and national legislation. The result that emanated from the CNE is a perfect reflection of the will of Venezuelans who went to the polls."

On Jan. 10, 2019, Maduro will assume his mandate as president for his second constitutional term, swearing in before the country top court. In normal times, the Venezuelan president's oath is taken before the National Assembly (AN). Since that body remains in judicial contempt since 2016, it has no legal ability to perform its normal duties.

Maduro's presidency will also be recognized by the Bolivarian National Armed Forces (FANB), a formality that takes place after a new president takes office. The next day he will appear before the ANC, to ratify the new mandate he received in the May elections.

On Jan. 11, 2016, the TSJ declared the National Assembly in contempt of court for swearing in three lawmakers from the MUD elected by the state of Amazonas in December 2015. The three Indigenous legislators should have been temporarily suspended because of voting irregularities in that region, but instead assumed their seats on July 28. The contempt of court is maintained to this day because the new board of the assembly refuses to accept the rulings of the TSJ.

ANC president Diosdado Cabello explained during the Meeting of the Congress of the Peoples, that article 336, number 7 of the constitution declares as constitutional the exclusion of municipal, state or national legislative branch powers when that power has stopped acting within norms or requirements to guarantee compliance with the Carta Magna, a term used for the Constitution in Venezuela.

The collective group of Latin American nations Lima Group, accused the Bolivarian administration of manipulating the elections, declaring the results "illegitimate" even before the ballot had taken place. The ad-hoc group created in August 2017, is known for its alignment with U.S. foreign policy, mainly but not exclusively based on anti-Venezuela stances.

According to Nicanor Moscoso, who was an international observant in the 2018 Venezuelan elections, "not recognizing these elections is a political resolution that each one of these countries takes. (...) we have not seen that they speak against the electoral system but against the political decision of doing the elections."

The Lima Group staged a new set of interventionist acts against Venezuela when the foreign affairs ministers of these countries met on Friday, Jan. 4, with the United States Secretary of State Mike Pompeo to determine the next set of actions against Venezuelan President Nicolas Maduro, ahead of his inauguration on Jan. 10, and signed a statement questioning the validity of the 2018 presidential elections.

Despite the actions of this group of countries, several heads of state, intellectuals, social and political leaders have reaffirmed their support to the democratically elected president of Venezuela, as they also condemned the interference on the South American country, led by the U.S. and its Latin American allies.

Representatives from several countries will attend the swearing-in ceremony of President Nicolas Maduro before the TSJ. Bolivian President Evo Morales, Cuban President Miguel Diaz-Canel and El Salvador's Salvador Sanchez have confirmed their presence. Representatives from Rusia, China and Turkey will also be present at the ceremony, as well as the Secretary-General of the Organization of the Petroleum Exporting Countries, Mohamed Barkindo.

At least 600 intellectuals, academics, artists, teachers, deputies, lawyers, activists and representatives of religious sectors signed a statement released by the Network of Intellectuals, Artists and Social Movements in Defense of Humanity, on Monday urging for the respect the sovereignty of Venezuela.

"The electoral result and the democratic response of the Venezuelan people demonstrate their determination to continue a path of independent and democratic construction of their destiny," the statement reads.