Since Venezuela announced plans in January to hold early presidential elections, world leaders and factions of the opposition have condemned President Nicolas Maduro and his administration, branding the elections 'illegal' and claiming the vote will somehow be 'rigged.' 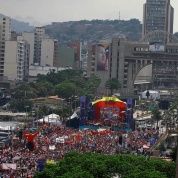 RELATED:
US Actor Danny Glover: 'We Must Respect Venezuelan Elections'

The Organization of American States (OAS) has consistently urged Venezuela to cancel the May 20 elections, saying they couldn't possibly be "fair, transparent, legitimate and credible."

Meanwhile, the Lima Group – a collective of 14 Latin American nations – has accused the administration of manipulating the elections, declaring the results "illegitimate" even before the ballot has taken place.

Such accusations overlook Venezuela's long history as a pioneer in electoral fingerprint technology and regular audits to guarantee transparency and eliminate voter fraud.

The South American country's elections have been some of the most internationally observed since 1999, when Hugo Chavez first won the presidency.

Former U.S. President Jimmy Carter, founder of the Carter Center, said: "Of the 92 elections that we've monitored, I would say that the election process in Venezuela is the best in the world."

Results over the past 20 years show that the electoral system enables a fair process for voters and political parties alike.

When Chavez ascended to power in 1998, the electoral system was revolutionized with the introduction of a non-partisan National Electoral Council (CNE), and the replacement of party-appointed poll workers with people who were randomly selected.

The observation report by the Organization of American States (OAS) said the 1998 presidential elections were "clean, clear and transparent, and gave ample proof of the Venezuelan citizenry's… devotion to democracy."

This was one of the first elections to break a four-decade, two-party electoral monopoly held by the Republican Democratic Union (URD) and Political Organization of Electoral Independence (Copei).

So began a 20-year trend of transparent and fair elections, throughout which Venezuela has maintained one of the world's highest voter turn-outs.

Following Chavez's inauguration in 1999, Venezuelans moved to rewrite the constitution and filled 95 of the constituent assembly seats with a Chavez-led coalition. OAS observers approved, saying: "The entire election, from the opening to the close of the polls and the ballot count, was fully transparent." The constitution was approved by 71.8 percent.

In 2004, opposition leaders announced a petition for a referendum against the legitimacy of Chavez's administration. Signatures poured in and the opposition won the right for the 1999 constitution to be recalled.

The National Electoral Council (CNE) announced the referendum on June 8, 2004, but it was ultimately overruled by over 50 percent of the voting population. In following years, the opposition continued to claim election fraud, but their allegations were consistently denied, citing the international electoral observers who stated the referendum was performed in a legitimate and judicial manner.

In 2007, the right-wing Podemos party fought the Chavez-led constitutional referendum to amend 69 articles, one of which was to abolish presidential term restrictions – a policy dozens of countries have enacted – for which Chavez was internationally criticized as a "strongman" and "dictator."

The president's progressive proposals would have extended social security to the self-employed and informal workforce, lowered the voting age to 16 and given equal access to city services.

However, the final tally of votes showed a narrow win for the right with 51 to 49 percent. It was the first major win for the opposition during the Chavez administration, but the president accepted defeat with grace, not once proclaiming 'fraud' or other voter irregularities.

The electoral system further proved its worth during the 2013 presidential elections in a narrow battle between Nicolas Maduro and opposition party candidate Henrique Capriles, following the death of Chavez. Nearly 80 percent of eligible voters cast their ballots, giving Maduro the win with a margin of only 1.49 percent.

Capriles, who had accepted his loss to Chavez the year before using the same voter system, cried electoral fraud and demanded a full audit of the 15 million cast ballots.

The CNE agreed to a partial audit and concluded there were no irregularities. Capriles then took his case to the Supreme Court, claiming voters were "coerced" or inhibited by "violence" at the polls, but the court dismissed the case for lack of "solid evidence."

In 2015, the main Democratic Unity Roundtable (MUD) opposition party ran in the legislative elections and won by a landslide, taking a two-thirds majority in the National Assembly. It marked the right-wing's first win since before Chavez's election in 1998.

However, the opposition-led parliament disregarded CNE evidence that some members were voted in fraudulently and remained illegitimate.

Consequently, the Supreme Court voted to annul all decisions made by the National Assembly in November 2016.

President Nicolas Maduro announced his plans to clean house and replace the National Assembly with a new body of delegates: the National Constituent Assembly (ANC).

Unsurprisingly, the right-wing completely rejected the move, claiming it was unconstitutional and prompting the government to initiate a dialogue to acknowledge their concerns.

The opposition rallied international support to stop the ANC elections and tried to prevent voters from entering rural polling stations by erecting barricades on the streets on the day of the vote, July 30.

With a 42 percent voter turnout, the election was declared a political success despite low participation from right-wing supporters.

The opposition and international leaders continue to contest the legitimacy of the ANC and the timing of this year's May 20 elections.

The United States has imposed sanctions against the Bolivarian nation and claims the general elections are "neither free nor fair." Canada has gone so far as to ban Venezuelan embassies from installing polling stations.

Such actions completely disregard international law; Venezuela's long history of acclaimed clean and fair elections, and the fact opposition leaders themselves proposed the date of the elections.

By Erin Fiorini and Monica Sabella