Oct. 27, witnessed a complete shutdown in the Indian Administered Kashmir. All the business establishments, markets, schools, colleges, and transport across the valley were closed. The Joint Resistance Leadership of Kashmir called for a complete strike to mark the “black day” of Kashmir’s history. 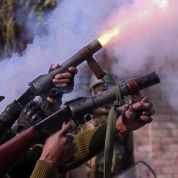 “Black Day” in the jailed valley is infamously known as the day Indian troops entered Kashmir ending the freedom of Kashmiris, engulfing the valley into a seven-decade-long conflict and bloodshed.

Kashmir, known for its majestic mountains, exquisite beauty, the abundance of natural resources, and scrumptious food, is also renowned for a bloody conflict that claimed innumerable lives, raped entire villages, widowed scores of women and rendered number of parents, childless.

The conflict-often considered to be three decades long, starting in January 1990 when the then Indian government of Prime Minister V.P Singh enacted Armed Forces Special Powers Act (AFSPA) in Kashmir which empowers Indian army to act with impunity in areas that the Indian state considers to be ‘disturbed’-has a longer trajectory.

The genesis of Kashmir issue can be traced back to 1947, the year India ‘won’ independence from the two-centuries-long British colonialism.

The King of Kashmir, Maharaja Hari Singh, a Hindu ruler in the Muslim majority valley, dreamt of ruling Kashmir independently while more than 500 princely states were banded together by the British to form the present-day geopolitical territory known as India.

Hari Singh’s father bought Kashmir from the British in 1846 which chose not to accede with India. Nonetheless, this was shattered by the entrance of Pakistani troops in Kashmir in October of the same year.

Realizing his impending doom, the fleeing king requested military help from India and in return acceded the valley into Indian territory on Oct. 26, 1947, despite the opposition of the people.

On Oct. 27, 1947, in the early morning hours, Indian army landed in Kashmir. Their ascendance became the catalyst of the movement for ‘azadi’ (freedom), embroiling the picturesque valley into a conflict which not only became a polarizing controversy between two neighboring countries in South Asia-India and Pakistan-but also attracted the attention of the United Nations and other international players.

While India has always maintained the stance that Kashmir issue is an internal one where the international organizations have no role, Kashmiris have a different opinion.

The then Prime Minister of India Jawaharlal Nehru after the accession of Kashmir in Indian territory promised plebiscite to the natives. The promise has not been fulfilled yet by any of the successive administrations. Instead, the central government allowed an increased body count of Kashmiris by the Indian forces.

Seven decades later, the situation remains unchanged. A regular reading of any Kashmiri news outlet will inform one about death in the occupied state on a daily basis.

Indian security forces have always legitimized the killings as purging ‘terrorists’ and ‘foreign elements’ (Pakistani militants who often cross over into India’s Kashmir territory to join the fight against occupation) from the valley but in majority cases, innocent Kashmiris are killed with impunity, who are branded as ‘terrorists’ or ‘over-ground workers’ i.e. supporter of terrorist activities.

In June 2017, the Indian army launched a new operation named Operation All Out which has resulted in the killing of 217 anti-occupation militants, highest in last eight years.

The Jammu and Kashmir Coalition of Civil Society (JKCCS) Annual Human Rights Review-2017 informed that “The frequency of encounters against militants has also resulted in what has been termed ‘encounter-site civilian killings’ in which at least 19 civilians have been shot dead by armed forces personnel.”

In 2018, by far almost 170 ‘militants’ were killed which also includes civilians in encounter sites.

This encounter site civilian killings are executed when civilians get news of ongoing encounter, they throng to the cite to stop armed forces from killing rebels. This results in indiscriminate firing on unarmed protesters, adding them to the piles of bodies, India has been leaving since the start of the occupation.

On Oct. 11, a wave of shock swept the valley when the news of encounter of Manan Wani, a Ph.D. scholar turned militant in North Kashmir’s Kupwara district reached the occupied population.

Wani’s joining militancy had been hailed by many as a new trend in Kashmir movement where intellectuals are picking up guns. In May, Mohammed Rafi Bhat, a sociology professor of the University of Kashmir met the same fate within two days of adopting the path of gun-solution.

His death is deemed as inspiring younger generations to leave their lives as students or scholars and tackle Indian state head-on.

Death at the hands of the military is only one aspect of the Kashmir struggle. The valley-dwellers have been victims of enforced disappearance, widespread rape by occupational forces, brutal torture, pellet guns, etc.

According to the latest Human Rights Report by JKCCS, there are more than 8,000 reported cases of enforced or involuntary disappearance and more than 3,800 unmarked graves in Kashmir. Association of Parents of Disappeared Persons (APDP), an organization, led by Parveena Ahanger, has been fighting for the rights of relatives of the disappeared.

The survivors of Kunan-Poshpora rape case have not yet received justice. In February 1991, the Indian forces launched cordon and search operation (CASO) in twin villages of Kunan and Poshpora of Kupwara district. The operation turned out to be one of the most gruesome ones. Indian army raped every female in the village and beaten the men up. The horrors of that fateful day are still being carried out by survivors who did not see the ray of justice even after 27 years despite repeated attempts.

Since then, numerous other cases of sexual abuse by Indian army have been reported but they have denied all allegations and the Indian state chose to turn a blind eye towards the violence against women.

If one visits the infamous ward eight of Shri Maharaja Hari Singh Hospital or SMHS, a macabre view will immediately hits the visitor. Scores of young men with white bandages on their eyes are lying in line in room eight of ophthalmology ward. All of them hit with pellet guns in their eyes by forces during protests. Some might be able to recover their sight, some not.

According to JKCCS report, there were reportedly 41 people who received eye injuries during pellet firing by armed forces in 2017.

But all the morbidness in the world does not deter Kashmiris. Their yearning for 'azadi' increases each passing day which leads to a burgeoning number of men joining the armed struggle against the mighty Indian state.

Note: This is the first part of four parts Kashmir series which will discuss various forms of human rights abuse in Kashmir by the Indian state.