“At a time when there was no formal opposition inside the parliament because the opposition party did not have the required number of seats to be qualified as an opposition, it was the students and youth of the country that became the opposition on the streets,” says student leader Umar Khalid, a seasoned activist from India. 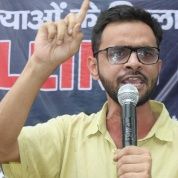 The History and Activism of the LGBTQ Community in India

Khalid, an activist belonging to the Bhagat Singh Ambedkar Student Organization (BASO), a left-wing student organization, is a famous name in Indian political circles. In the absence of a formidable opposition, this student leader and his comrades took to the streets to oppose the right-wing government’s “anti-people” policies.

In an exclusive interview with teleSUR, through the lense of his own political struggles, Umar spoke about the anti-people policies of the right-wing government, the rise of Hindu nationalism in India, the privatization of higher education, the witchhunt and media trials of progressive activists and critical voices, and amidst this precarious situation, the rise of students and youth of the country to oppose the government.

Umar, a 30-year-old activist, rose to fame in 2016 when the Indian government imprisoned him along with two other activists, Kanhaiya Kumar, and Anirban Bhattacharya, on sedition charges. February 2016 and subsequent months saw a trying period for activists and Indian civil society. Three students were jailed for organizing a program on Indian-Occupied Kashmir in their university, namely, Jawaharlal Nehru University (JNU) in Delhi.

Umar says that all three were accused of  “raising slogans and calling for the destruction of India. Much of the footage that several media houses aired on television, claiming that we were raising anti-national slogans were later found to be doctored. The police don't have a single piece of evidence which suggested that I did that. I categorically claimed that these were all false allegations. The biggest evidence is that police, even after two and a half years, have not been able to file a charge sheet in court and proceed a trial against us. So they have no evidence against us to proceed in the court of law. That is why they are doing media trials, consistently defaming, demonizing, and inciting violence against us.”

During the crisis, JNU, the whole university, was branded as an anti-national university since it is a bastion for the left and progressiveness, and since a majority of its students resisted government attempts at jailing these activists.

But that was not the first time students opposed the current government. For Umar, “this catapulation of students into the role of an active opposition to the government did not start with the February 2016 incident. It started on May 16, 2014, when the Modi government came to power. They have a very distinct agenda for higher education e.g. to saffronize (Saffronization is a term used by critics of the right-wing BJP government, whose main goal is to impose Hindu-religious nationalism in the country) Indian universities — forcefully implementing Hindutva ideology on educational institutions. They also want to do away with public education and bring private companies into the education sector, which they see as a market.

“So it began with the Film Institute in the city of Pune in the state of Maharashtra where students protested. Then, in Hyderabad Central University, a Dalit scholar, Rohith Vemula, committed suicide. The institutionalized discrimination brought him to a situation where he ended his life. While the students were demanding justice for Rohith, JNU was attacked. So right from the time this government came to power, one after the other, several universities were attacked.”

In this threatening atmosphere, Umar holds “the government of India directly responsible because they have created an environment by defaming their critics, by saying their critics work for the destruction of the country."

"Also, in other instances, where minorities have been lynched based on rumors, ministers have garlanded and congratulated those convicted of killing minorities. So this has created an environment where any violent person or goon today in the country feels that if he goes and attacks someone, he will be rewarded. He will be congratulatated, there will be people who will applaud him. This is what is responsible for the situation.”

Apart from direct or tacit support for these murders, the ruling party is not confining itself from creating new ways to intimidate anyone who dares to speak up. Recently, a journalist was fired from his job for exposing the prime minister’s lies about the conditions of farmers in the country.

“If you have a job, you can become jobless for criticizing. If you are a student, you can be rusticated (suspended). I was rusticated thrice in the university and all three times my rustication was struck down by the courts. This is a different form of intimidation.”

Despite this atmosphere of fear and media trials, opposition and protests on the streets have only increased. “I am talking about spontaneous protest, not organized by any opposition party. Citizens coming out on the streets and saying that this is not acceptable in our name and the fact that in this entire campaign of fear and hate, we are united.

“Even the assassinations of different progressive writers like Narendra Dabholkar, a rationalist from Maharashtra; the communist leader comrade Govind Pansare; prof Kalburgi in Karnataka; and a prominent journalist like Gauri Lankesh from Karnataka last year, the attempt to silence voices of dissent and rationality had the opposite effect. More voices have emerged. So I am not hopeless. Actually, the government is afraid because its lies are being exposed in front of the people. It's afraid that it will lose power and to hide that, they are trying to play this politics of fear,” claimed Khalid.

While speaking about the current administration and its policies, Khalid stated that the government has failed in every promise it had made prior to the 2014 general elections. They have not only failed to eradicate corruption, bring more jobs, or help farmers, “but each of the problems has intensified."

“As per government records, 12,000 farmers committed suicide every year which comes down to two farmers committing suicide every hour The debt-ridden government in the last three years waived off debts worth 2.5 lakh crores (US$46 billion) of big companies, but couldn't slash the debt of farmers. There are drought-like conditions in many parts of the country, but the government did not declare drought because it has changed the drought declaration policy, because if the govt declares that, it has to give relief; and the private insurance companies would have to give relief. The government has destroyed existing jobs.”

While the economy of the country is witnessing a downturn, capitalists, big industrialists, and friends of Modi; people like Gautam Adani, Mukesh Ambani, and the billionaires who rank among the richest people in the world, have increased their wealth by leaps and bounds.

“To hide these failures,” explained Khalid, “ they are trying to play communal-casteist politics and instilling hate in the civilians. People can see through this and they are uniting. The movements that have come across in the last four years, those are uniting on the ground and that is also forcing opposition parties to unite. I don't see why the opposition parties should not unite. It is the need of the hour.”

Umar believes that despite the differences between different parties, they should come together to fight the right-wing government. As an activist, his immediate vision is to remove the “fascist regime” from power. It has already done untold harm to the citizens of the country, apart from empowering assassinations of minority and progressive voices. According to the young activist, the current administration has destroyed the social fabric of India.

In the far future, Umar envisions a society where every form of injustice and discrimination will be done away with and people will be equal on all footing. But “it will take a long time for us to heal the social fabric.” According to him, the present-day generation has a bigger and harder role to play in the coming decade but he is hopeful. If voices of opposition can survive and grow despite the crackdown on dissent, then the present generation really is ready for a long struggle.