The Indian government Wednesday issued an executive order which made the practice of instant triple talaq (divorce) a punishable offense. The Muslim Women (Protection of Rights on Marriage) Bill, 2017 was introduced in the Lok Sabha, the lower house of Indian parliament on Dec. 28, 2017. It was passed instantly. But in August in the Rajya Sabha, the upper house, the bill faced opposition and couldn’t be passed. 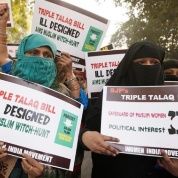 As a result, the government of India brought out an ordinance to make the practice an offense for which Muslim men will be imprisoned. The bill came after Shaira Bano and four other Muslim women petitioned the Supreme Court of India in 2016 seeking relief from practices like triple talaq, polygamy, and halala.

In India, where the Muslim community uses Sharia Law in personal matters, triple talaq (talaq-e-biddat) is a practice which allows Muslim men to pronounce the word talaq (divorce) three times and divorce is executed instantly. In the age of technology, this form of divorce can be executed by Muslim men through Skype, phone calls, SMS, and email.

This practice of instant triple talaq is responsible for bringing women to destitution for decades. In Murshidabad alone, a Muslim majority district of the state of West Bengal, over 100,000 women have suffered due to the practice of triple talaq.

Often talaq has been executed for trivial reasons like not enough salt in food, or in one case, when a wife went to see the village fair. Anawara, a young girl from Murshidabad, went to see a fair which angered her husband. In the heat of the moment, he pronounced Talaq three times.

He immediately realized his mistake and wanted to take back the words, but it was already too late. The neighbors heard it, and her parents made her marry another man so that when he executes divorce, Anwara could remarry her first husband. That is how "halala" works. But Anwara didn’t abide by it. She chose to end her life instead by committing suicide.

Other women, those who haven't taken their lives, are ostracized. Those choosing to fight against the practice are suppressed by moulavis (religious leaders), their families and the society at large.

But the derivative practice of instant triple talaq has plagued many Muslim communities around the world and Turkey, Qatar, Pakistan, Saudi Arabia, and Bangladesh banned the practice decades ago.

Feminists activists in India are engaged in a prolonged battle to stop this practice. The All India Muslim Personal Law Board (AIMPLB), which considers itself as the guardian of Muslim community in India, have opposed the feminists. They have come up with justification for the instant triple talaq, like, if the practice is abolished, Muslim men could just burn or kill their wives to get rid of them.

On the other hand, the ruling party of India, Bharatiya Janata Party (BJP) which is as patriarchal as the AIMPLB, appropriated the voices of the feminists calling for the eradication of Muslim Personal Law and bringing Uniform Civil Code (UCC) in the country.

A deeper analysis of BJP’s politics will show that the government is against Muslim minorities. They want India to be a Hindu nation and cares little for Muslims, a fact made explicit by the way Muslim men are being lynched around India with the murderers being congratulated by ministers of the ruling party. For ages BJP wanted to eradicate Muslim practices in India and appropriating the cause of Muslim women in order to enforce a majoritarian system was their way in.

But the activists have long resisted the appropriation of their cause by the BJP. They have also spoken against the current bill and how anti-women it is.

Speaking to teleSUR, Afroja Khatun, an activist and secretary of the South Kolkata Society for the Empowerment of Women (SKSEW) based in Kolkata, which has been protesting for the rights of Muslim women said, “This bill is vague and anti-women. It does the opposite of protecting women, instead invisibilizing them. It is true that Muslim women do need legal protection, which has been denied to them for far too long. But this bill, which is now an ordinance, does little to improve the situation of the women of this community.”

She further gave a detailed account of the content of the ordinance which criminalized triple talaq and made it a non-bailable offense. A husband will be put behind bars for three years if a wife or her relatives by blood or marriage file a complaint. The ordinance also asks the husband to provide a subsistence allowance to his wife and kids every month, with the amount decided by a magistrate.

“This is not maintenance,” explained Khatun, “maintenance is provided when a divorce is executed. This is just a monthly allowance which the husband has to produce while he is behind bars. This bill also does not talk about women and what will happen to them.”

“Does imprisonment mean the end of the marriage? Or does it mean they will continue to be married?” Khatun raised various questions. “In case the triple talaq is considered null and void, but the woman prefers to leave her husband, will her voice be heard? Or if the talaq is indeed executed but the woman prefers to stay with her husband. What then?”

She also said that an ordinance is valid for few months only. What will happen if the validity ends? Will the Muslim community revert back to the practice again? Sending husbands to jail can also increase their life risks as the men can take revenge on their wives by torturing them more. Without having a system of proper rehabilitation for these women, imprisoning their husbands would only mean putting their lives at risk.

“We do not want Muslim women to suffer any more than they already had but this vague ordinance will only bring more suffering and confusion and they deserve a strong legal protection. And a deeper analysis of the bill will only reveal the ugly politics of BJP as they are just doing a widespread witch-hunt of Muslim men. They do not care about Muslim women, no matter how much jargon they use.”

Flavia Agnes, a women’s rights lawyer echoed the same sentiment. "The effect on women of instant triple talaq and desertion of wives is the same. So many men, Hindus and Muslims, desert their wives — that should also be criminalized. Why are you not doing anything about that? This step is only to target Muslim men," she said.

Meanwhile, another organization for Muslim women, Bharatiya Muslim Mahila Andolan (BMMA) based in Mumbai welcomed the ordinance and considered this a step forward.

For Heba Ahmed, a bill is needed, but she is skeptical of an executive order. “Let's leave aside the arguments that the BJP government cannot be trusted with the marital rights of Muslim women and that any attempt by the government to interfere in Muslim personal law is nothing but 'femo-nationalism' (using feminism to promote nationalism) of the fundamentally anti-Muslim Indian state.

"So we can admit that the Muslim Women Bill is needed, albeit with amendments, so that the Bill promotes the rights of Muslim women more than the criminalization of Muslim husbands. But why this ordinance? Executive orders cannot be trusted. Is this the government's last-ditch attempt to bypass the Parliament?” said Heba speaking to teleSUR.

Arshie Qureshi, a feminist activist from Indian Administered Kashmir said to teleSUR, “Triple talaq is present in the Kashmiri community just like anywhere else in India. But Jammu and Kashmir cannot implement this ordinance, as it has to be passed by the state government first.” So the Muslim women from this Muslim majority community will not have the so-called protection that the government is claiming to provide the women.

As many feminists are protesting the decree, in an ironic turn of events, the radically-religious AIMPLB is now supporting them in opposing BJP, despite also opposing ending the practice.

The controversial executive order reveals an unfortunate discourse in India in which the voices of Muslim women, when they are demanding justice, are appropriated by a right-wing patriarchal government for strictly political interests. However, when they protest that very same right-wing government, an equally patriarchal organization like AIMPLB, their cause is appropriated by those radical Muslims.

In the midst of the conflict between the two conservative organizations, the voices of women are invisibilized.