The International Monetary Fund (IMF) approved a second installment of over US$2.5 billion to Ecuador for economic development, Friday, the agency reported. 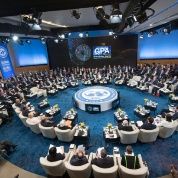 With 10.5 years to pay off the debt, Ecuador accepts a second loan from the IMF with its 3.2 percent interest, the Ministry of Economy and Finance (MEF) said.

MEF Minister Richard Martinez said, “The support of the international community to our economic program confirms to us that we are going in the correct route.”

According to correspondance from Ecuador and the IMF, there are six key points the two sides agreed to as conditions for the major loan: restore a "prudential fiscal policy;" strengthen the financial system; "promote transparency and good governance;" promote the poor and vulnerable segments of the population; support job creation and competitiveness; and strengthen the institutional framework of the Central Bank from Ecuador.

At first glance, the proposals seems to promise improvements to the South American society. However, on further analysis, the IMF letter demands an increase in public sector layoffs by 50 percent, a decrease in the country's economy, strengthening of dollarization in the country that has been using the U.S. currency since 2000, and tax increases.

Over Twitter, former president of Ecuador, Rafael Correa, warned about the negative consequences on the population this agreement will bring.

"Obviously, despite the fact that the government tried to hide it, 'the agreement' with the IMF obliges the country to remove almost all subsidies, but the rich will be exonerated from foreign exchange taxes, while the poor do not send money abroad," concluded the former head of state.

Since the austerity policies began implementation in December, 11,820 people have been fired from the public sector.

In 2009, Correa said the IMF "should be extinguished," calling it one of the big culprits and cause of the (2008 global) crisis."