The recently concluded U.S. midterm elections have been dubbed as a “referendum on Trump” referring to the popularity and effectiveness of U.S. President Donald Trump. However, there is a lot at stake for Trump's Republican Party as a whole, regarding the future and orientation of conservative politics in the United States, and around the globe. 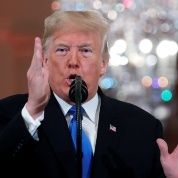 There are several useful tips to consider when attempting to understand the “Trump effect,” over the short and midterm in conservative politics: Trump’s adherence to core Republican values, Republican support for the Oval Office and the role of the Democrats in boosting Trump’s standing within his own Party.

How do Republican core values, such as freedom of expression, small government, maintaining a big and well-equipped military, among other issues, like free trade — a value shared by both Democrat and Republican elites — play out in the President’s agenda and his concrete policies?

Alexey Volynets, a self-professed libertarian “camping on the right,” expressed, to teleSUR, his belief that Trump has routinely stuck to the important core values of the Republican Party, such as “America first” and “free markets and free expression.”

For conservatives, Trump's attacks on the media fall within the bounds of what is permissible without violating the freedom of the press, “The fact that he is fighting with them with words, I see no issue with that. The press should be able to ask questions. Can they do it? Absolutely!” Volynets told teleSUR.

Immigration, an issue which has been at the center of Donald Trump’s midterm elections campaign strategy, included the pledge from the U.S. commander-in-chief to send military reinforcement to protect the country's border with Mexico which helped to swerve attention from other fundamental issues.

Registered Massachusetts Democrat, Adolf Jochnick, believes that one such elephant in the room is taxes. The left-leaning analyst explained, to teleSUR, that "Trump’s announced tax cut and military spending are going to increase the budget deficit... contrary to Republican core values.”

Regarding the hot-button issue of immigration, recently appointed Republican Senator General Josh Hawley supported Trump’s stance from a distance — in Missouri, a state which shares no border with Mexico — to reiterate how significant the topic of migrants have featured, and ultimately influenced, in the electoral process.

Immigration is a top priority among Republicans, is the case in point. And, in context, Republicans have unwaveringly objected to illegal immigration, not for economic or security reasons, but on declared moral grounds.

Overall, Trump has had a lot more support than criticism from his own party. But, generally, elected officials seem to fear or are made uncomfortable by the President’s unconventional abrasive leadership style. Additionally, some of those who opposed him in the past have changed their views at their earliest convenience. Also, there have been some bridges of cooperation which have helped steady the relationship between Congress Republicans and the Oval Office.

There have been a few cases of consistent criticism of the U.S. head of state from within the Republican ranks.

Notably, late Senator John McCain, who was the President’s sharpest and most consistent critic within the party — and, even so, he had voted in line with some 83% of Trump’s positions, according to FiveThirtyEight. There have been little to no pushback since the death of the McCain.

Mitt Romney, former governor of Massachusetts and recently elected Senator of Utah, has also been critical of Trump, but to a significantly lesser extend — once referring to the president as a “phoney, a fraud.”  But, Romney has since had a complete turn around since the 2016 presidential election. “So he [Romney] then shut up, it will be interesting to see what he does once he becomes a Senator,” Jochnick commented, to teleSUR, evidenced by the ex-presidential candidate seeking support for his Senate race campaign from Utah Republican Orrin Hatch, who is unapologetically aligned with Trump.

Another clear example of the strength of the partnership between Republicans in Congress and the Oval Office is the Supreme Court nomination of Brett M. Kavanaugh, on the cusp of the midterm elections. For conservatives, this is a landmark win against the Democratic Party. “They’ve been pushing back for 30 years, and, obviously, the announcement tonight is a big step in the right direction,” Curt Levey, the leader of the conservative activist group known as the Committee for Justice, declared to the New York Times, while breaking down Kavanaugh's afflicted path to his appointment.

The economic situation — unemployment is currently down to 4.0% — is also handsomely helping Trump maintain popularity and support within the Republican Party. “Right now Trump is at the peak of his popularity. [But] ...I think the [growth in the] economy is going to start slowing [down]... you are going to see a bit more unemployment and it will affect the poll results,” Jochnick projects.

A FiveThirtyEight poll shows that President Trump currently has a 41.8% approval rating.

Democrats, for their part, have had a significant role to play in Trump’s rise within the Republican Party. To start with, the Dems chose Hillary Clinton, who is widely viewed as an uncharismatic, unpopular, nepotistic dynasty political figure, who possess very little charisma, as their presidential hopeful. And, on the point of addressing issues which were deemed more substantive to voters, the Democratic Party ticket showed a lack of commitment and not enough interest, during presidential debates and campaigning.

The Democrats did very little to appeal to the pleas of uneasy coal and steel workers, while Trump promised to protect their jobs. “The coal miners and steel miners have felt for a long time that jobs are disappearing and nobody cares about it,” a problem which Hillary did not take a decisive stand on, registered Democrat Jochnick recounted to teleSUR.

Trump, on the other hand, while unabashedly inconsistent and belligerent, was more receptive, “he promises good things for these poor people [who] don’t trust Hillary,” Jochnick added. During his campaign, Trump promised to put “America first” in foreign policy matters and bring back the jobs which he accused the Democrats of allowing to migrate, to other parts of the world — such as Mexico —  by allowing “bad” trade deals to go unrevised.

But, regardless of a resigned deficit to address policy, the Democrats managed to win House majority against the more plain-spoken Republicans, who retained the Senate. “Of the 99 Republicans Trump endorsed or campaigned for, 51 prevailed, 33 were defeated and 15 remain undecided,” according to The Source.  Also, Trump’s main supporters, Mike Braun (India, Sen.), Josh Howley (Missouri, Sen.) and Marsha Blackburn (Tennessee, Sen.) all triumphed over their respective challengers.

What are possible consequences of the Trump-effect?

First, Trump’s unorthodox style of conducting politics allows Republicans to reach directly to their bases. And while doing so, he is not directly undermining Republican core values, which keeps him and the party in their base's favor. Additionally, Trump has given Republicans a conservative Supreme Court appointee, solidifying a key cooperation platform between Congress Reps and the Oval Office.

The danger, amid a wave of midterm-election success, Republicans remain silent while President Trump pushes forth his distraction strategies to keep attention from the growing U.S. deficit on account of heavy military spending and a massive tax cut. If the economy gets stagnant or unemployment turns around from its happy phase, it could prove too late for the Republicans to devise and enact a sustainable plan to save themselves over the mid- to long-range.

Perhaps, it is already too late for the United States to recover from the conservative populist trend which is also riding high across many parts of the world, including Latin America and Europe. The long-term consequence for conservative politics, from the 'Trump effect,' in a post-truth world, is that leaders get comfortable with fabricating big distractions to keep the attention from those issues that are close to their Party platforms.

This method is not entirely new, we have seen historical figures, like Adolph Hitler, successfully convince entire populations into backing 'big ugly lies,' in a far more insular sphere. However, the effect of the 'big ugly lies' is much worse when they travel at the speed of Twitter.