Polls are currently showing a sustained trend for Democrats to take hold of the House of Representatives, and for Republicans to keep control of the Senate, ahead of the November 6 midterm congressional elections. 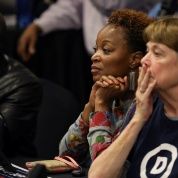 The first trend, Democrats taking the house, would mark a shift in the current distribution of seats within the lower chamber which is dominated by Republicans — Republicans hold 235, Democrats 193. The second, indicates a continuation of a Republican hold over the upper chamber — Democrats currently hold 49 seats, Republicans 51.

“We’re just five days until the midterm elections, and if you’ve noticed, our forecast hasn’t really changed. Democrats are still favored to take back the House, while Republicans are still in control in the fight for the Senate.”

Polling and analysis firm FiveThirtyEight shows a similar tendency — sustained for at least one month from October to November 2018:

For the House race:

For the Senate race:

So, which elements help us explain these two possible outcomes for both parties?

First, a disclaimer is in order. Polling data are only predictions, the last word will be had by U.S. citizens at the time they cast their respective votes in the ballot boxes. So, we can only speculate as to what factors will be driving these possible outcomes.

Democratic Win in the House

The main reason will likely be how much support the Democratic Party can obtain in suburban areas, both densely and sparsely populated.

In these regions, Democrats are projected to rise from a controlling 54% to 66% of seats. While the Republican Party does best in rural areas, where they currently hold 80% of the seats, according to elections analyst, Geoffrey Skelley.

Republican hold of the Senate

This means Trump carried 10 out of 13 states — with more than a 20 point margin — during the presidential election, where seats are currently being disputed, according to a political analyst for New York Magazine, Ed Kilgore.