“We’re the product of 500 years of struggles: first against slavery in the independence war led by insurgents against Spain, then avoiding being absorbed by North American expansionism, then for promulgating our Constitution and expelling the French Empire from our territory, then Porfirio’s dictatorship denied the fair implementation of the Reform Laws and the people stood up with its own leaders...” 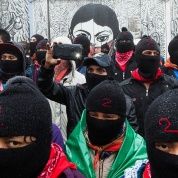 Those were the opening lines of the first public statement by the National Liberation Zapatista Army (EZLN), published on the day of the uprising on Jan. 1, 1994, when the North American Free Trade Agreement (NAFTA) came into effect. The agreement drove the United States, Canada and Mexico into a commercial zone that has since impoverished the working classes while making the bourgeoisie even richer.

In that first statement, the EZLN announced they would walk into Mexico City and defeat the national military, inviting people to rise up and join them in the fight. Since then, the Zapatistas have come an incredible distance, drawing various sectors of Mexican and international society, regardless of their background and skin color, into a struggle that continues today.

Their stance is different now. Perhaps the invitation to rise up in arms was a “bluff” to intimidate the government, but we will never know. In the early years, they negotiated the San Andres Accords with the federal government, establishing that Indigenous peoples’ autonomy would be respected. The agreements, however, were soon violated by the administration of Ernesto Zedillo Ponce de Leon, so the Zapatistas decided to implement them on their own, forever eschewing mainstream politics, including the new National Renewal Movement (Morena) led by Mexico's newly inaugurated President Andres Manuel Lopez Obrador.

Claudia T., one of the founding members of a collective named 'Mujeres y la Sexta,' was in Mexico City at the time of the uprising, 900 kilometers away from San Cristobal de las Casas. Sympathizers quickly organized protests to stop military action against the insurgents, and out of those connections were born new support networks in urban and rural areas. Some of those people formed brigades to bring aid to Chiapas, where the uprising took on new life. Luz y Fuerza del Centro, a state-owned electricity company with a combative union, even sent workers to install electricity in Zapatista villages where the government had been completely absent.

“There were several ways to help them. People from the pedagogy or nursing faculties used to go and support them,” Claudia told teleSUR. “We would rent a bus and go as far as we could, getting wet to reach the communities and help somehow. Everytime we went there we took more than we brought. They would offer us their love, their teachings, the humanism.”

Those were some of the first relations established between the insurgent group (or communities) and civil society living in the cities and towns outside of the Zapatista rebel territory. Through the years, collectives would establish long-standing relations with the Zapatistas, a network of organizations and sympathizers that has shaped the movement.

“Then the Sixth Declaration of the Selva Lacandona came. They explained their six points and asked us: What about you? We had to write our own points, how we thought we could change,” said Claudia.

“The relation established by going and supporting was transformed. It was not any more a ‘come and help me,’ but a ‘let’s be partners in struggle.’ It’s different. We go to their meetings, they invite us to forums, seminars. Scientists, artists, we are all nourished. Also their youth, their support bases, are nourished by this.”

This process was in line with a transformation in the Zapatistas’ own internal political organizations. The ‘Aguascalientes’ were transformed into ‘Caracoles,’ each ruled by a ‘Good Government Junta,’ integrated by one or two delegates sent by the communities’ assemblies.

According to the late Subcomandante Marcos, the movement’s most prominent spokesperson, the new political system created by the Zapatistas aimed to coordinate and answer to the communities’ autonomy. By the time the Aguascalientes were disbanded, the Zapatistas would not be “receiving leftovers and wouldn't allow the imposition of projects” in their territory without consultation.

Small communities choose temporary representatives, sent to higher instances until reaching the Caracoles. But representatives are not professional politicians. Instead, everyone is encouraged to participate and learn how to represent without substituting popular demand.

The focus of the Zapatistas has shifted since the time of the uprising. In 1996, they called for a meeting of Indigenous people across Mexico, which turned into the National Indigenous Congress (CNI). More than an organization, the CNI is a space to share community struggles and their vision of a possible future for the country. Without joining the EZLN or taking up arms, anti-capitalist Indigenous people joined the CNI and are still organizing resistance from their own trenches, capacities and worldviews.

The support networks played a key role in perhaps the CNI’s most widely known project, forming the Indigenous Government Council (CIG) and electing Maria de Jesus Patricio Martinez, better known as ‘Marichuy,’ as their spokesperson and presidential candidate for the 2018 elections. They are in charge of organizing Marichuy’s visits to their respective communities and cities, collecting signatures to approve her candidacy and include her in the ballots, and contributing to a collective reflection exercise on revolutionary praxis.

Times of No, Time of Yes

The Zapatistas’ slow but steady development in revolutionary theory and practice has made them one of the main references for an alternative to capitalism in Latin America and the world. By refusing to take part in the mainstream economic and political system and actually proposing and executing ideas, the movement is moving forward positively.

For Eugene Gogol, a writer and activist living in Mexico, the Zapatista thinking echoes that of Georg W. F. Hegel and Karl Marx.

“It is an advance in which out of the first no, or rejection, something new arises, new ideas, new concepts, the positive in the negative,” Gogol told teleSUR. “In Hegel this is put forward as a development of ideas, of thought.”

Marx, while recovering Hegel’s idea of dialectics, implemented that system of thought into the material world and living human forces. For Marx, the destruction of capitalism (first negation) would come han- in-hand with an alternative (second negation or the negation of the negation), says Gogol, resulting in communism and “humanism arising from itself.”

But the Zapatistas don’t define themselves as communists, solely as Zapatistas. They believe that every individual and group should find their own path for liberation, their own “negation of the negation.”

“The Zapatistas in 1994 called for an uprising, and have since turned to other forms of struggle,” says Gogol. “They are anti-vanguardist, and thus believe that each movement and social struggle needs to decide how they will organize and what form their struggle will take, without being dictated from above.”

This thinking has influenced Gogol and pushed him to write and organize study circles with colleagues to analyze today’s reality, while taking part in Zapatista-led initiatives and support movements such as the CNI, CIG and their spokeswoman Marichuy.

“For myself, and those of us in Praxis en America Latina, we see the need to both identify with what we see as the dialectic of the Zapatista struggle, while at the same time not shying away from showing that this dialectic is not only Zapatista, but has historically and globally developed. For us, understanding the methodology and particularly showing Marx’s revolutionary dialectic in permanence is very necessary today for all freedom struggles, including Zapatismo,” says Gogol.

Now, the EZLN and other revolutionary Indigenous organizations are at a turning point. Marichuy didn’t make it to the ballots for the 2018 elections, won by the center-left Andres Manuel Lopez Obrador (AMLO), but the CIG continues organizing a national movement integrated by Campesinos and the working-class, Indigenous and non-Indigenous alike, to topple capitalism and the ruling class.

Lopez Obrador and his team have promised to respect the San Andres Accords signed by the EZLN and the government in the 1990s, but reality seems different. Even though the accords establish that Indigenous communities should be consulted over anything related to their territory, one of Lopez Obrador’s first announced project, the Maya Train, has been approved without proper consultation, and Indigenous organizations from the Yucatan peninsula are rejecting it.

In late December, support networks from across Mexico met in Guadalupe Tepeyac, part of the Zapatista autonomous territory in Chiapas, to discuss the next steps in the struggle along with representatives of the CNI, the CIG and the EZLN. On January 1, they will be at ‘La Realidad,’ the first Caracol, commemorating 25 years of the uprising.

Taking into account the outcome of the last assembly, this has the potential to produce an inclusive national plan and years of work between organizations, a new step in the long road to autonomy, liberty, life and dignity. A new “negation of the negation,” another time for proposing and action.