On Nov. 17, 1983, three women and three men of Indigenous and mestizo origin established the first encampment of the National Liberation Zapatista Army (EZLN) somewhere in the Lacandona Rainforest in Chiapas, southeast Mexico.

The army, modeling itself on a guerrilla insurgency, was founded by former members of the National Liberation Forces (FLN), an armed organization with a presence in several states, including Chiapas. Many of its leaders were killed or arrested in an encounter with the military in San Miguel Nepantla in the State of Mexico, and the FLN eventually disintegrated. Some of its former members remained deep in the Chiapas jungle, mingling with Indigenous communities and learning about their worldview and social issues.

Perhaps, the guerrilla’s biggest success at the beginning of the 1980s was the incorporation of autochthonous Indigenous thought and leadership, with mestizo elements taking a more secondary position. Marxism and libertarian socialism were still a key analysis tool, but the EZLN was founded on Indigenous ideals that reclaimed the principles of Emiliano Zapata, who stood up in arms with Campesinos to reclaim their land and rights during the Mexican Revolution.

The EZLN remained underground for years, gaining support from the local Mayan communities whose agency had been historically denied by the Mexican government. It wasn’t until Jan. 1 1994, the day when the North American Free Trade Agreement was enacted by Canada, Mexico and the U.S., that the army came forth by assaulting San Cristobal de las Casas and other towns in Chiapas. The EZLN then reached an agreement with the government and signed the San Andres Accords, in which the government committed to respecting Indigenous rights across the country. The accords were never enforced, and the EZLN refused to depose arms.

Since then, the EZLN has been a world reference for revolution, supporting anti-capitalist, social, and Indigenous movements, and forming international networks, making use of their distinctive rhetoric that evolves with time. 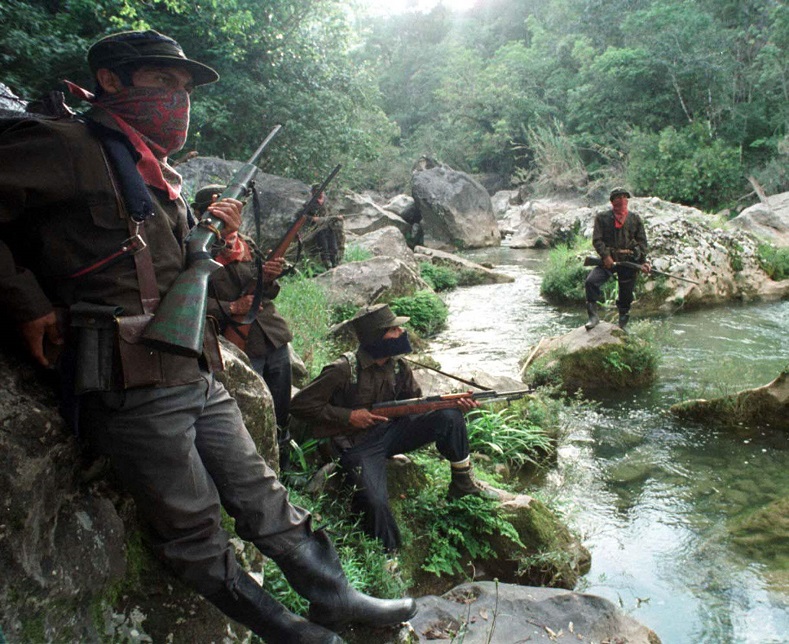 Members of the EZLN in a Chiapas rainforest a month after their existence was revealed to the world. Feb. 22, 1994. Photo:EFE 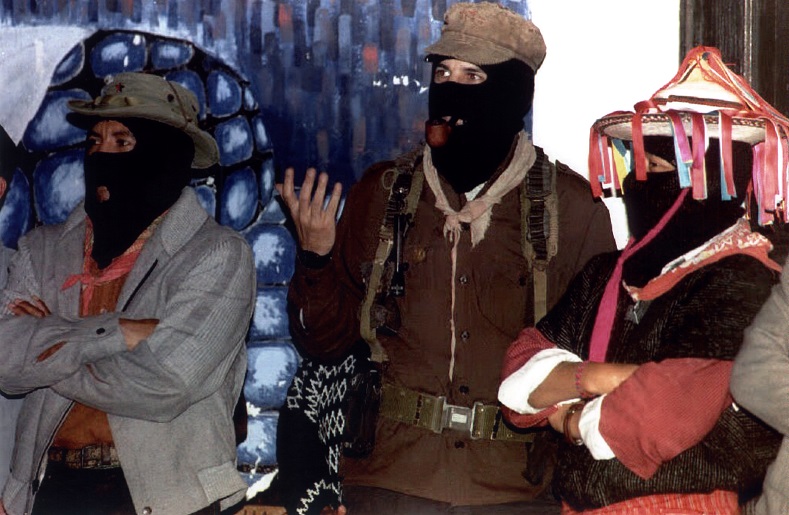 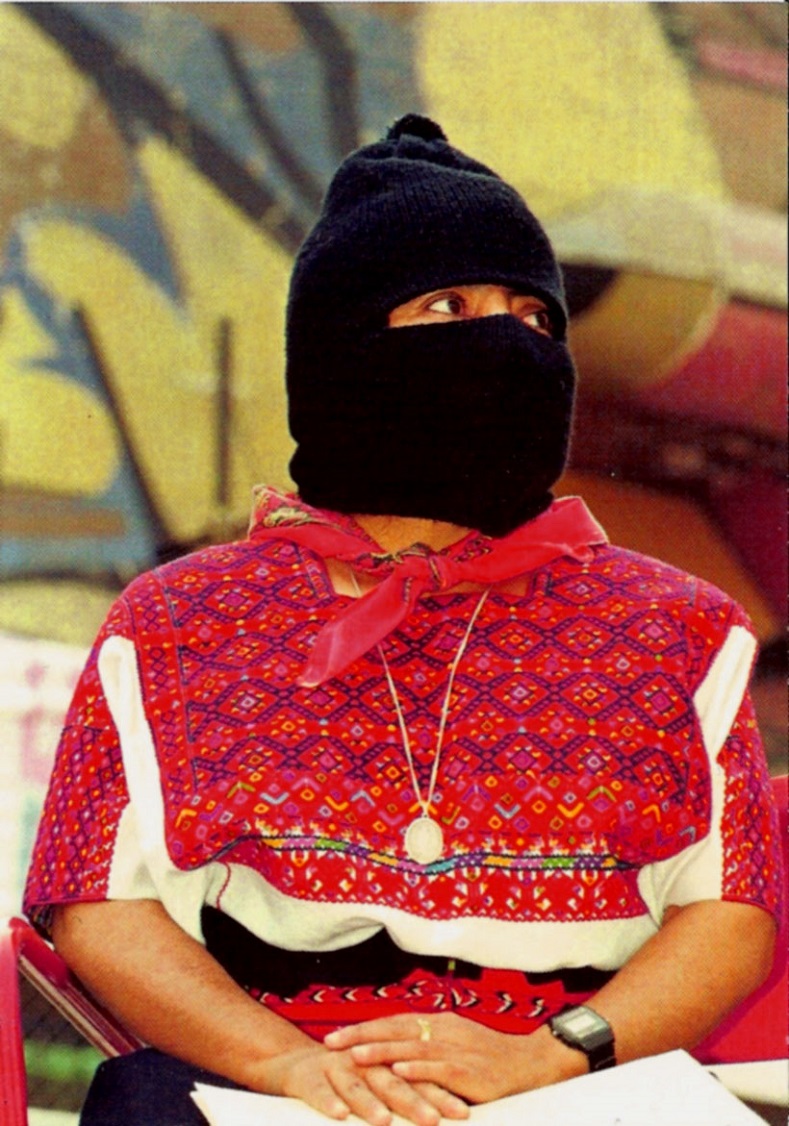 Commander (Comandanta) Ramona, an Indigenous Tzotzil woman, was one of the first visible leaders of the EZLN. In 1993 she was in charge of compiling sentiments and ideas in order to write the Revolutionary Law of Women. She was also the main military strategist for the taking of San Cristobal de las Casas during the 1994 Zapatista uprising. She was one of the first members of the Clandestine Indigenous Revolutionary Committee (CGRI), the leadership body of the EZLN. She died of cancer in 2006. Photo:Bastian (Heriberto Rodriguez). Flickr, CC BY 2.0, commons.wikimedia.org/w/index.php?curid=1411958 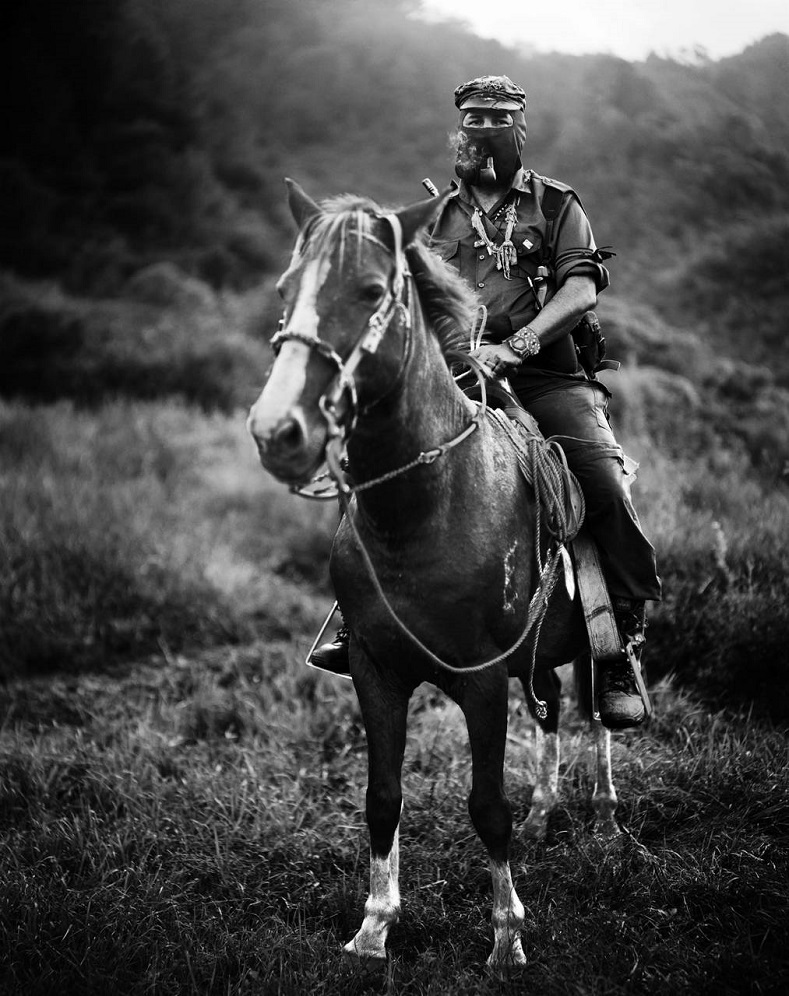 Sub-commander Marcos is perhaps the most recognizable figure of the EZLN. He emerged as the mestizo media spokesman, at the service of the army's commanders. His voice and personality contributed to the EZLN's public image, writing most of the communiques and giving national and international interviews. Photo:Jose Villa at VillaPhotography, CC BY-SA 3.0, commons.wikimedia.org/w/index.php?curid=7320193 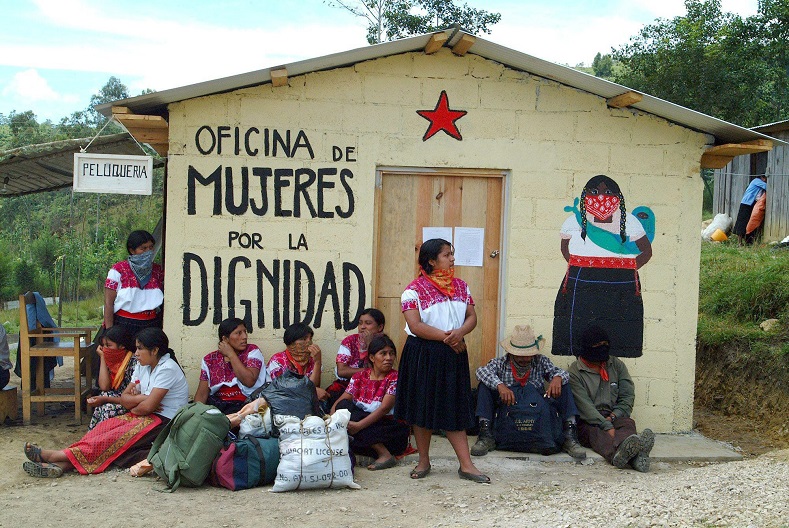 Women have been at the center of the Zapatista revolution from its beginning, as the ideology and practice of the movement have tried to eradicate widespread "machismo" in the Chiapas communities. Here, women wait for the bus after attending the inauguration ceremony of the "Caracoles," the new form of territorial and political orgnization that continues to today. Oventik, Chiapas. Mar. 10, 2003. Photo:EFE 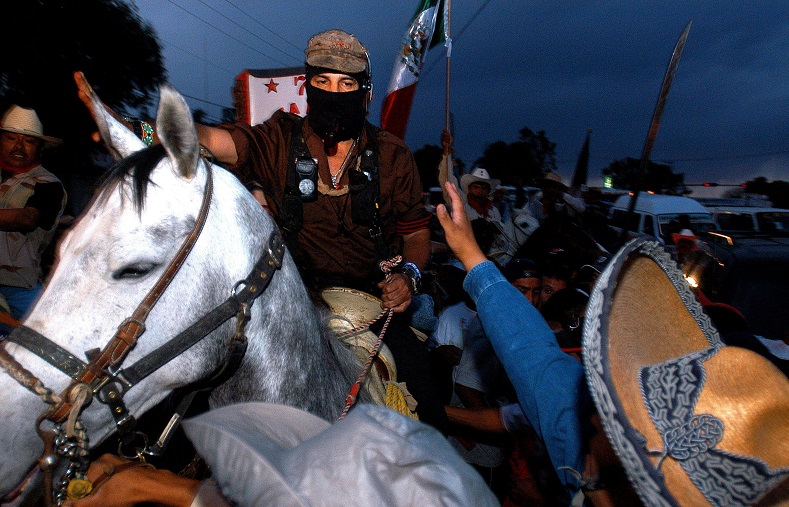 In 2006, Sub-commander Marcos, then known as "Delegate Zero," and other members of the EZLN toured Mexico visiting supportive communities, peoples and territories as part of the "Other Campaign," which attempted to counter the mainstream political narrative of the three predominant parties during the 2006 presidential elections. Atenco, State of Mexico. Apr. 26, 2006. Photo:EFE 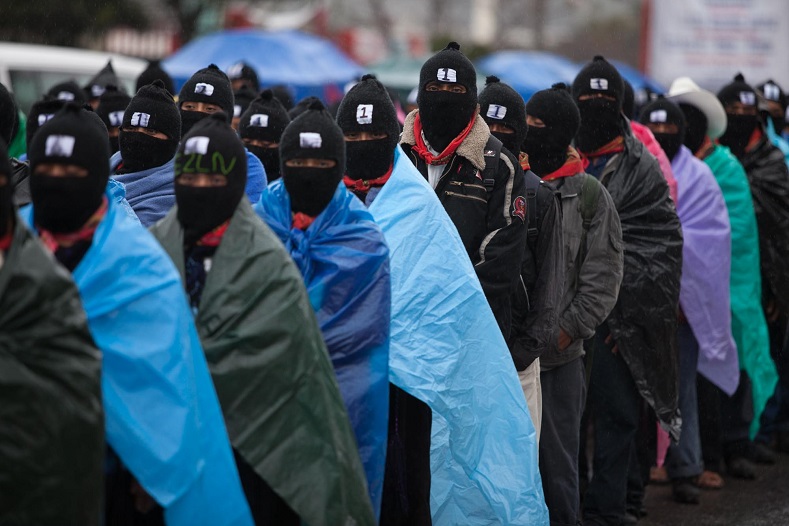 After a long absence from media and public events, rumors said the EZLN was crumbling. To answer the accusations, thousands of Indigenous Zapatistas marched in silence in different cities and communities in Chiapas. The event took Mexico by surprise and marked a new phase for the movement. Dec. 21, 2012. Photo:Ivan Casteneira | http://www.ivancastaneira.com 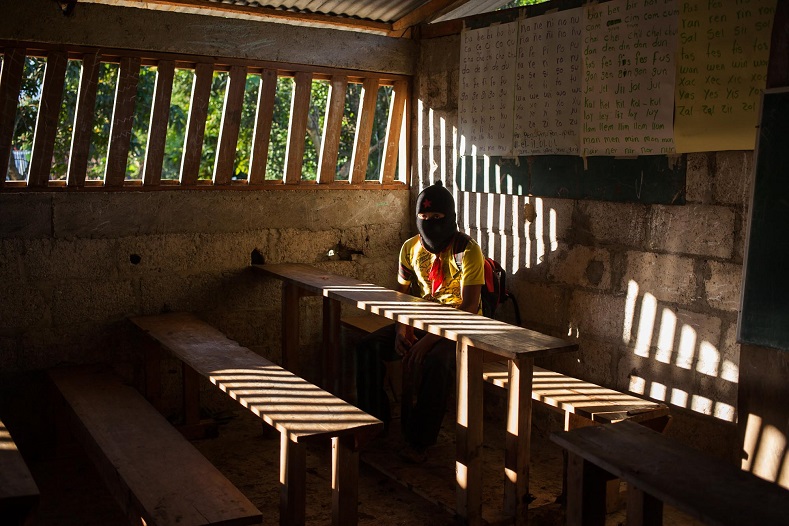 A young Zapatista at an independent school in Chiapas. In 2013, the EZLN called for supporters to join them in their communities for an education program known as "La Escuelita," in which those interested could learn about the internal organization and everyday life of the movement. Dec. 2013. Photo:Ivan Casteneira | http://www.ivancastaneira.com 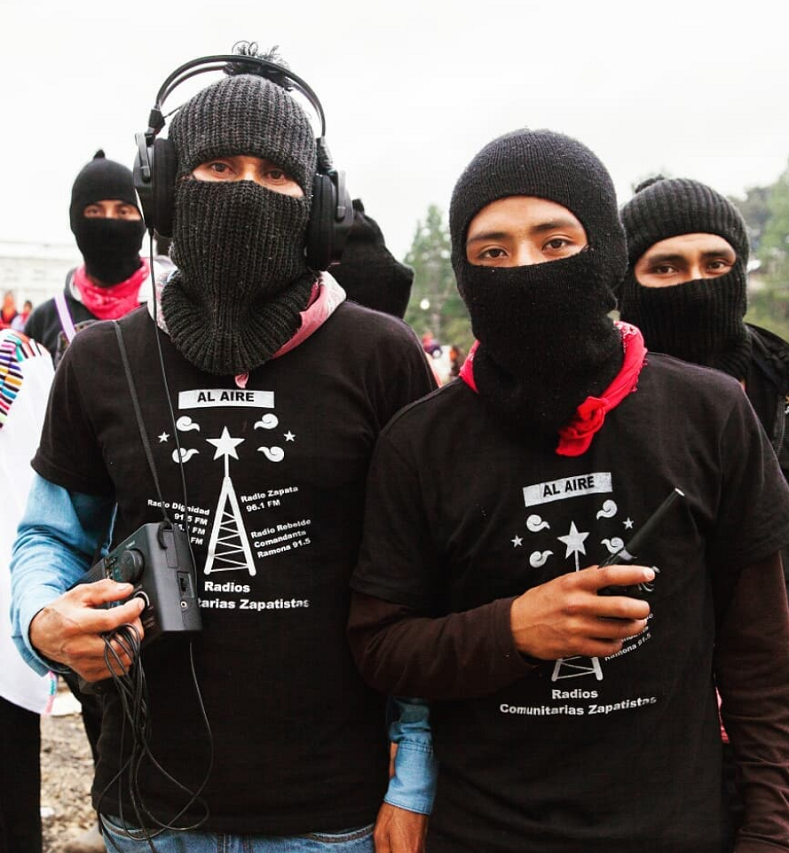 Zapatistas members of "Los Tercios Compas (The Odd Ones Out)," the organized media professionals of the EZLN. The army recognized the necessity of having their own, community organized media productions for their own consumption. La Morelia, Chiapas. October 2017. Photo:Raúl Fernando | instagram.com/raulfernandopl/ 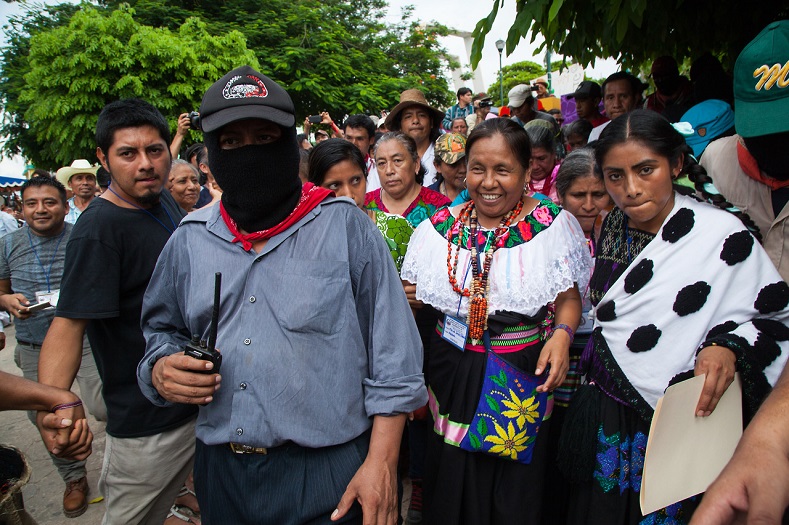 As part of a new strategy, the EZLN-backed National Indigenous Congress and the Indigenous Government Council nominated as their spokeswoman an Indigenous Nahuatl woman known as "Marichuy" for the 2018 presidential race and toured the country visiting supporting communities. The political powers that be, however, didn't allow her to be on the ballot. Palenque, Chiapas.. Photo:Raúl Fernando | instagram.com/raulfernandopl/