“Three army men caught hold of me and 8-10 army men raped me in turns. They had huge battery torches with them and they used them to see my naked body while making lewd remarks,” recalls a survivor of the brutal mass rape by the Indian army in Indian Occupied Kashmir. 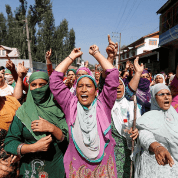 Kashmir: Clashes Between Army and Militants Leave Many Dead

In a cold winter night of Feb. 1991, when the inhabitants of the small hamlets of Kunan and Poshpora in Indian Occupied Kashmir’s Kupwara district were preparing to retire for the day, a sudden crackdown by Indian army tore them away from the comforts of their homes.

Two years prior to that, responding to Kashmir's growing militant pro-independence movement, the Indian government decided to militarize the whole valley. The central government implemented the Armed Forces Special Powers Act (AFSPA), giving the Indian army power to rampage through the resisting valley with impunity.

The Army's Cordon and Search Operations (CASO) -which still go on- was an everyday occurrence during the 90s. The army used to bring the men out, search their houses and then parade the men in front of informers. If the informers pointed towards any suspected militants or their sympathizers, they were picked up by the army.

That night, the Indian army did more than CASO. In what came to be known as one of the darkest chapters in the history of Kashmir, army personnel forcefully entered the houses and gang-raped women of all ages. No one was spared.

"Do you remember Kunan Poshpora?," an award-winning book by Essar Batool, Ifrah Butt, Munaza Rashid, and Natasha Rather traced the events of the fateful night of Feb. 23, 1991 and documented questions of justice, stigma, the responsibility of the state, and the long-term impact of trauma on women, who, even after 27 years have not receive justice.

The vulnerability of the women in this occupied region has not diminished in any sense.

Women in conflict zones have always been victims of varied forms of violence. Kashmiri women are not the exception.

In an exclusive interview,  Essar Batool, one of the writers of "Do You Remember Kunan Poshpora?" told teleSUR that “women in conflict zones or occupied territories form an extremely vulnerable group. Apart from facing loss in terms of losing members of the family, women are also extensively subjected to sexual violence… that is used on a large scale against women in Kashmir. Examples range from Kunan Poshpora mass rape in 1991 to the Ballipora Panzipora mass rape and right up to the Shopian rape case of 2009.”

Explaining her above-mentioned point, Batool said that “attacks on women are considered an assault on the 'honor' of the community and is used to bring 'shame and to bring down their morale'. Women are also targeted to punish the community for support to a certain idea that is opposed to the occupation. An example of this is the Kunan Poshpora mass rape case and many other cases of sexual violence against women in Kashmir, where communities were targeted for supposedly 'supporting armed fighters'. The whole patriarchal structure is at work in conflict zones.”

Arshie Qureshi, a Kashmiri scholar and activist who has been working with the Kashmir Women’s Collective, which focuses on cases of domestic violence in the region, has a similar stance. While speaking to teleSUR, Arshie said, “There are multiple levels of marginalization that they have to face, irrespective of their age or social status. They have to navigate between patriarchy, everyday violence against them and a broader conflict. They become more vulnerable to sexual violence and loss and destruction of assets like homes, as has been witnessed in the past in Kashmir. More women are getting affected psychologically and suffering from post-traumatic stress disorder (PTSD).”

Kashmiri women are not only rape survivors. A large number of them also become half-widows as a result of large-scale violence in the region.

“The existence of half widows is unique to Kashmir, referring to women whose husbands were picked up by the Indian armed forces, never to return. As such they are left in a unique status where they are neither widows nor can they marry again given social and religious obligations. Such women also face complications in their relationship with in-laws and are often left to fend for themselves. These are the consequences of violence that are rarely talked about,” Essar stressed.

According to Arshie, the half-widows “are compelled to step into the labor force which they might otherwise have chosen not to. Because of a lack of required skills they often ended up getting exploited by their employers. They also have to face hostility from the society because, with the disappearance of their male partners, they are left to deal with the question of their marital status which takes long to be resolved.”

A 2011 report by Association of Parents of Disappeared Persons (APDP), which advocates for justice for victims of enforced disappearances, revealed that there are an estimated 1,500 half-widows in the valley, which is a “very conservative” estimation according to the organization.

These half-widows get a meager cash transfer from the Indian government, around US$ 2 per month, which is not enough to sustain them, especially if they have children to take care of.

The conflict and the Indian army’s continuous harassment have a far-reaching effect for Kashmiri women which has trickled down to other spheres of their lives.

“In Kashmir, women face two levels of oppression, one is the patriarchal society and another is a patriarchal occupation. The losses, the oppression affects us mentally, physically with access to public spaces being limited. Our movements, our thoughts are occupied, so naturally, we are inclined to think differently from women who don't live under occupation,” opined Essar.

Natasha Rather, another writer of the book said in an interview with Al Jazeera in 2016, “before the conflict escalated in the late 1980s, girls were encouraged to attend college, work and occupy high positions. But they were forced to drop out due to the conflict. Rapes were humiliating for the entire Kashmiri community and demoralizing. As a result, women were made to cover their faces and wear burqas. Their movements were restricted.”

Despite all the violence and suppression and a “very male-dominated resistance space,” according to Essar Kashmiri women are involved everywhere.

“From writing songs and elegies for armed fighters to being messengers and to directly participating in a show of resistance on the streets… Politically I think conflict has made women very vocal and expressive in their protest against the occupation.”

“There are women like Anjum Zamarud Habib and Asiya Andrabi who have been jailed for their pro-freedom stance and association with such parties. There are women who write, speak and bring forth diverse voices and opinions in resistance.”

“Their participation in the public sphere is viewed as a political act, an act of defiance where she is compelled to take sides and spell out her alliances. It is still seen as unconventional for women to participate in the public sphere, although women have played a significant role in shaping the political dynamics of the state,” Arshie concludes.

Note: This is the second part of four parts Kashmir series which will discuss various forms of human rights abuse in Kashmir by the Indian state.