From the deserts of Kenya to the Honduran jungles, feminist leaders in the Global South countries are leading the way in progressive social development which is setting a tone of equality, human rights, and the steady elimination of the patriarchal system for future generations. 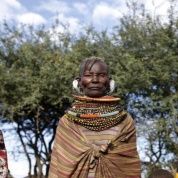 The blood, sweat, and tears of women and their grassroots movements working towards a better future can be seen throughout the global south.

In Singapore, women’s rights organizations are steps away from criminalizing marital rape, which is believed to be tragically underreported. Experts say the intermarital issue has festered due to the lack of support from local government and the lack of financial resources to fund legal action.

However, after pressure from organizations, a parliamentary committee adopted the initiative to remove male impunity and have recommended an amendment of the Penal Code to protect women from sexual abuse.

Association of Women for Action and Research Corinna Lim said, “A long overdue, full and unqualified repeal of marital immunity for rape would be a momentous step forward for women's rights.”

Women in Kenya’s Samburu region rejected all hope of federal intervention, deciding to break free from centuries of tradition of violence, rape, female genital mutilation, and child marriages to found one of the first modern matriarchal societies.

Umoja, Kiswahili for ‘united,’ was born from the ashes of Africa’s harsh patriarchy in 1990 after an exodus of women abandoned their homes and abusive marriages to follow Rebecca Lolosoli, a women’s rights activist, and create the first of four matriarchal villages.

Lolosoli told Broadly Correspondent Michelle De Suarte, “As a Samburu woman, you have no right. If the husband wants to kill you, he has a right to kill you at any time.”

Despite attempts from jaded husbands to destroy Umoja, the women thrive, selling handicrafts, and using the money to found schools- setting an example for others in the region and abroad.

“(The men) say I’m bringing a bad culture to them, but we don’t want our children to be like us. We want them to have light in their lives,” Lolosoli said.

No men are permitted to reside in Umoja and many of the women living there embrace their independence.

Similarly, the present situation of Kurdish female fighters may change the region’s attitude towards women for future generations. Despite the rather misleading descriptions by western media, Kurd women told researcher Amy Austin Holmes, their choice to enlist was more about escaping an unwanted arranged marriage or protecting their homeland.

“For them, in some ways, the decision to join a militia or to take up weapons, it could be something where they feel they don't even have a choice, because they feel that their government did not protect them, and so they feel the need to take up arms themselves."

However, in pursuing the career in militant resistance, they found equality and independence which they say they won’t surrender without a fight.

According to Holmes, in every way, the women aspire for equality, training female fighters and joining their male counterparts on the field of combat, sometimes commanding mixed groups of soldiers in the heat of battle to defend their homeland.

Holmes explained, “(Equality) is something that they don't just preach but they actually in their everyday lives, to a large extent, seem to practice."

Their participation in the battle has been monumental in retiring the use of sexual violence as a weapon of war and armed conflict. Nobel Prize winner, Yazidi fighter, and former Islamic State group's captive, Nadia Murad, was a powerful voice of advocacy which led to a U.N. war crimes investigation into the Islamic State group's forces.

“Three years ago I was one of thousands of Yazidi women kidnapped by the Islamic State and sold into slavery. I endured rape, torture and humiliation at the hands of multiple militants before I escaped," Murad said in a recent speech.

“I was relatively lucky; many Yazidis went through worse than I did and for much longer. Many are still missing. Many have been killed. Once I escaped, I felt that it was my duty to tell the world about the brutality of the Islamic State,” she added.

“I don’t take my freedom for granted. The terrorists didn’t think that Yazidi girls would be able to leave them, or that we would have the courage to tell the world every detail of what they did to us. We defy them by not letting their crimes go unanswered.”

Thousands of miles away, in Central America, the organization founded by Honduran activist Berta Caceres continues its own battle for justice and environmental rights.

Caceres has become a household name after her fearless defense of environmental rights led to her tragic demise in 2016 at the hands of foreign assassins linked to a Dutch hydroelectric company attempting to dam the Gualcarque River.

Since her death, Caceres’ organization, Consejo Civico de Organizaciones Populares e Indigenas de Honduras (Copinh), has carried on her fight for environmental justice and Indigenous rights. The woman’s death ignited indignation which has travelled from Central America to the Andean region and the tip of Argentina, where Native activists continue to bring awareness to anti-capitalist struggles in a united push against foreign industries’ neoliberal motives and destruction of natural resources.

According to an international study that analyzed feminist movements in 70 countries, Authors Laurel Weldon and Mala Htun confirmed that the nations with strong feminist movements show a greater number of comprehensive policies by and for women.

“Women’s autonomous organizing has played a critical role for three reasons: First, women organizing as women generate social knowledge about women’s position as a group in society. Second, the issue of violence against women challenges, rather than reinforces, established gender roles in most places,” the study's authors said, adding that when paired with broader political institutions, women are better able to present the main issues directly affecting the female population.

The United Nations Millennium Development Goals outlined a three-point strategy for equality and development: to normalize the ratio of girls to boys following secondary and tertiary education and to level out the number of women in waged non-agricultural employment and national parliament.

Following the Rwandan massacre, almost 50 percent of parliamentary seats were open to female politicians. Today, the figure has increased to over 60 percent.

Despite setbacks and political leaders and parties who are pushing back against progressive, equal societies, women from Singapore to Syria to Honduras and all over countries in the Global South are sacrificing their lives every day in the fight for a better and just future for the generations to come.