Nov. 25 marks the International Day for the Elimination of Violence against Women. At teleSUR we believe violence is not only physical, sexual, and psychological, but also manifests itself through economic models that undermine women’s freedom and independence in the public and private spheres. 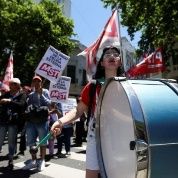 Around the world, from the United Kingdom to Brazil and India, women are suffering from government cuts to public healthcare, education, and programs that prevent domestic violence; cuts mandated by international creditors like the World Bank and the International Monetary Fund (IMF).

In moments of economic crisis, governments can choose to stimulate economic growth and job creation through public spending, which can help to counter the human cost of an economic downturn or crisis. Or, they can act in line with liberal free-market economics and reduce public spending to guarantee a reduction in the public deficit Structural Adjustment Programs (SAP).

Feminist economist Lourdes Beneria has criticized SAPs arguing the “the hardships of adjustment were unequally distributed, displaying not only a bias against specific groups of people — mostly a class bias — but also a gender bias.”

To delve into the feminist critique of austerity policies teleSUR spoke to feminist economist and Rutgers professor Radhika Balakrishnan about the viability of neoliberal economic policy, its disproportionate effects on women, the rise of “exclusionary” politics and a possible way out of a political and economic system that breeds inequality.

The experiences of the economic and social crisis of the 1990s and 2000s proved SAPs did not help with economic recovery. Why do you think the IMF and governments of the Global South continue to have faith in austerity measures?

They rely on a set of economic policies that are meant to promote a type of capitalist development. Neoliberal economic policy is based on opening up markets, shrinking the state of government, and a certain type of ideology that dictates how governments need to react to the economy. It is an Ideological trap related the hegemony of mainstream economics despite the little evidence in its favor.

We have seen that governments that defy these policies have a better rate of economic growth. A recent example would be Portugal. In 2015 the center-left government of Antonio Costa defied the austerity program, increased social spending to create jobs and they are getting much better growth rates than other countries in Europe that stuck to austerity after the 2009 European debt-crisis.

Portugal’s revival was recently covered by the NYTimes in an article that shows how steering away from austerity measures led to a “virtuous cycle,” better jobs, less unemployment, and more foreign investment. The government even took a part of the budget and made it a people’s budget, allowing citizens to vote on how the money is spent.

RELATED:
Report: Argentine 'Women Among Most Affected by Austerity Policies'

How do these policies (reducing public sector salaries, pensions, social spending, and other investment in safety nets) affect women specifically?

The last time I was in Spain, in the midst of the crisis, I was told of the situation of a woman who was being abused by her partner. Because of the crisis, the shelter that takes in women who are suffering abuse was closed, the school where she sent her children was closed forcing her to travel longer distances, and the employment prospects were so dismal that she found herself in a situation of economic dependence.

Inequality exacerbates violence because people can’t get out of violent situations and the levels of inequality in the world are at an unprecedented level. A 2018 Oxfam report showed that 82 percent of global wealth is in the hands of the richest 1 percent. In 2017, 42 individuals held the same wealth as half the world's population. In 2016 that number was 66 and in 2009, around the financial crisis, that number was 366. So the concentration of wealth is getting narrower and narrower every year.

This has implications for gender equality. The kind of economic policy that is run by the interests of the financial sector makes the world economy more volatile, deepen inequalities, and push people further behind.

Austerity policies that are being implemented around the world have an impact on the unpaid care work women do. When budgets are cut in health care it is women who have to take care of the sick. When food access is an issue within the family, women are the ones who go hungry, when access to education becomes an issue, girls are the ones who are kept at home.

There is also a link between frustration over poverty and unemployment and domestic violence.

Also, the increasing large-scale extraction of natural resources, climate change, and environmental degradation is undermining the livelihoods of millions of women and men, particularly in the developing world.

Right-wing governments are winning elections worldwide. The governments of the U.S. and Brazil are outright anti-women, anti-immigrant and are cutting social spending while increasing military budgets. How are women faring under these or similar regimes?

The rise of right-wing nationalist governments and xenophobia is a direct consequence of this concentration of wealth, of the economic policies that we've been following.

Exclusionary and fear-based politics are deepening societal divisions and breeding conflict and instability; millions are being forcibly displaced due to violent conflicts and humanitarian catastrophes.

Amid global socio-economic and political turmoil, not only is gender equality out or reach but women’s rights are facing renewed resistance from different kinds of fundamentalism. Civic space is shrinking and women’s human rights defenders are facing threats and persecution by both state and non-state actors.

One thing that all these right-wing governments have in common is being anti-women. We see in the U.S. a president who has undermined access to reproductive healthcare and the tax cuts that were given recently to benefit the rich will have negative impacts on government budgets. Programs in health and education will be cut having a serious impact on the poor and, particularly, on poor women.

One in five women and girls have experienced physical and/or sexual violence by an intimate partner within the last 12 months. Yet, 49 countries have no laws that specifically protect women from such violence. The shrinking of civil space is happening all over the world, India and the U.S. are the two I am most familiar with but it is also happening in Brazil, the Philippines, Italy, Poland, Hungary to name a few.

Do you see a way out of exclusionary politics and economic policies?

Yes. And I think the path begins with posing a seemingly simple question: what is the economy for?

We all participate in the economy: we work; we buy things; we eat breakfast; we buy coffees. What is the purpose? Is it to make sure that our 1 percent gets wealthier? Or is there some other purpose for the economy?

I think it's a really a radical question.

The economic policy that would come out of a human rights framework is one that is grounded in substantive freedoms and equality for realized outcomes, not just opportunities. The economy is no longer just about the pursuit of economic growth, but really about a shared prosperity.

Between Nov. 29 and Dec. 1 a group of progressive politicians, artists, economists, and activists will meet in Vermont, at the Sanders Institute, to discuss the world we want and the path to overcome the current trends of systemic inequality, right-wing nationalism, and xenophobia.