Bolivia faced a political and humanitarian crisis when leftist President Evo Morales was first elected in 2005. Since then, the country has undergone profound changes, but what faces the country if Morales loses Sunday's elections, and the country returns to those who governed during the neoliberal period? 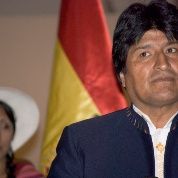 A look at Bolivia’s opposition candidates provide insight into that question, so too does examining the current fates of countries like Ecuador and Argentina that threw out progressive governments to elect neoliberals, which is what Bolivia’s right-wing is offering today.

The two main opposition candidates, Carlos Mesa and Oscar Ortiz represent two traditions within Bolivia's right. On the one hand, Mesa, a former head of state himself who presided during the country's neoliberal past, invited in the United States military to establish bases in Bolivia during his term. On the other hand, Ortiz, from the eastern city of Santa Cruz, is backed by the right-wing forces that led the nation's racist ‘media luna’ coup d'état that lasted from 2008 until 2009.

Carlos Mesa’s previous term (2003-2005) gives some idea of what lies in store for Bolivians if he wins. During his watch, poverty and extreme poverty was twice as high as the current rates—over two thirds of the population were impoverished. His presidency, which he didn't complete, came to represent one of the moments at which the country most beholden to the U.S. government and its institutions.

During his time in power he attempted to push through a bill that would grant legal immunity to U.S. officials operating in Bolivia, most of whom were overseeing coca eradication and quelling Campesino protests against the practice.

Mesa's two-year tenure saw not only 'security' affairs outsourced to the U.S., but economic policies. International institutions like the International Monetary Fund (IMF) directed economic affairs, exemplified by having their office inside the building where Bolivia’s Central Bank is also housed.

In his infamous resignation speech Mesa railed against Morales saying his proposal to nationalize natural gas was ‘unviable’ because the U.S. and the World Bank "have told us so."

Ortiz hails from the same party as long-time Santa Cruz mayor, Ruben Costas, a key figure in the 2008-2009 ‘media luna’ coup, a racist movement that sought to split the region from Evo Morales’ government and stop him from nationalizing gas fields in the department. The movement brought about a wave of racial violence in the Santa Cruz region inhabited by a white majority, against Indigenous migrant workers living there.

The stakes are incredibly high in this election. One only has to look to Argentina and Ecuador to see the speed at which progressive social pacts can disintegrate. After opting for Presiden Mauricio Macri, Argentina is now beholden to the tune of billions of dollars in IMF loans and all the austerity conditions attached to it. Macri and his IMF pact have produced runaway inflation, unemployment and poverty, as well as police excessive use of force against demonstrators who are constantly protesting the effects of the IMF measures.

Ecuador, too, is just now emerging from 12 days of massive police violence and military curfews imposed on protesters who were forced to the streets to stand against IMF-imposed austerity after President Lenin Moreno invited the fund back to the Andean nation after a nearly 20-year absence.

Both Macri and Moreno have used remarkably similar rhetoric being employed by the Bolivian opposition. Both railed against the leftist governments that preceded them, characterizing them as 'populist' and calling for a reorientation of foreign policy towards the U.S. and it’s institutions and allies.

Argentina and Ecuador are some of the leading voices pushing for the regional isolation of Venezuela, both integral members of the so-called ‘Lima Group’, which recently opened the door for a legal rubber stamping of foreign intervention in the region by activating the Cold War TIAR Treaty.

Ecuador in particular has accelerated attacks on the progressive regional integration championed by former Venezuelan president, Hugo Chavez. Barely completing half a term in power, Moreno has already triggered the disintegration of UNASUR, the most important Latin American forum that didn’t include the U.S. Add to that the handing over of Julian Assange to British authorities last April and establishing a U.S. military base in the Galapagos Islands, current president Moreno, whose approval rating has sunk to 17 percent, seems determined to do away with the progressive policies of the previous administrations, opting for austerity and U.S. approval.

Bolivia’s extraordinary achievements in lifting the regions poorest country out of underdevelopment have been achieved only after rejecting neoliberalism and taking back control of the country’s natural resources. One study illustrates how Bolivia would have lost US$74 billion in revenue were it not for Morales’ widespread nationalization initiatives.

A return to the neoliebral period in Bolivia, which both leading opposition candidates, Mesa and Ortiz, represent, will likely send the overwhelming majority back below the poverty line. Moreover, a final victory by either also puts the country at risk to return to vassalage, to the days when U.S. military bases littered the country and when economic policy was agreed upon first in Washington.