Imelda Cortez has lived in a prison in El Salvador since she gave birth to a baby whose father is Imelda's own elderly stepfather. Cortez, a 20-year-old woman from the rural town of San Miguel had been systematically raped by her stepfather since she was 12 years old. 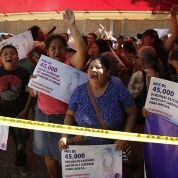 She has been in custody since April 2017, taken by the police a week after delivering a baby she did not know she was carrying.

Cortez was prosecuted after her mother took her to the hospital upon finding her daughter in pain and bleeding heavily. Hospital staff suspected an abortion and alerted the police. She is now facing 20 years in prison for “attempted murder.”

Her trial is currently underway. She didn't get bail and has been unable to hold her baby, who survived birth.

Prosecutors initially accused Cortez of fabricating the abuse to justify her "crime." That theory fell through when a DNA test confirmed the baby’s paternity. Her stepfather is yet to be charged.

“This is the most extreme, scandalous injustice against a woman I’ve ever seen,” Bertha Maria Deleon, one of Cortez’s lawyers, told The Guardian. “The state has repeatedly violated Imelda’s rights as a victim.”

The case has sparked international outrage, but Imelda is not an odd case in El Salvador.

El Salvador has one of the most violent laws against women’s reproductive healthcare. Abortions are banned entirely and women found guilty or suspected of having an abortion can be prosecuted for attempted murder.

What is seen as justice in the eyes of the law is destroying the lives of everyday women, particularly women in rural and impoverished areas of the country who are aggressively persecuted for anything that doctors or police presume to be an abortion, including stillbirths and miscarriages.

El Salvador’s anti-abortion law is similar to the laws of the Dominican Republic, Haiti, Honduras, Nicaragua, and Suriname which outright prohibit abortion, criminalizes victims of sexual violence and victimizes women who wish to exercise their right to access reproductive healthcare, pushing them to illegality.

“Highly restrictive laws do not eliminate the practice of abortion, but make those that do occur more likely to be unsafe,” the Guttmacher Institute, a leading research and policy organization for advancing sexual and reproductive health and rights internationally, states in their 2017 Executive Summary.

Women in need of abortions who are denied access, risk unsafe procedures that could result in illness, loss of organs, or death.

The world is geographically divided in terms of access to safe abortion procedures, which in turns means that the place where a woman is born can determine her probabilities of dying young.

Setting aside outliers like Uruguay in South America, South Africa in Africa, and Vietnam in South East Asia one could almost draw a line that separates the Global South and Global North and have almost all countries painted green (places where women can access safe and legal abortion without restrictions related to reason) above that line.

"Legal restrictions on abortion often cause high levels of illegal and unsafe abortion, and there is a proven link between unsafe abortion and maternal mortality," the Center for Reproductive Rights explains.

In 1965, Cuba became the first country in the region to reform abortion law in support of women’s health needs. It remains a unique example of human rights for women and women’s health.

“The assessment of over 50 years of voluntary and free abortions has been positive because women have gained a right in Cuba which has had great benefits. The most important has been the drop in maternal mortality,” sociologist Reina Fleitas told the Inter Press Service in Cuba.

Through the national health system, abortions in Cuba are available on request up to the 10th week of pregnancy. An abortion is only considered illegal if “it is without the consent of the pregnant woman, is unsafe, or is provided for profit.”

However, fewer than three percent of women in Latin America have access to legal abortions without restriction.

Marge Berer, Coordinator of the International Campaign for Women’s Right to Safe Abortion, says abortion has been historically restricted for three reasons: to protect women when the practice was dangerous and deadly and to protect fetal life, and because it was seen as a sin. “Ironically, it is restrictive abortion laws—leftovers from another age—that are responsible for the deaths and millions of injuries to women who cannot afford to pay for a safe illegal abortion,” Berer published in a report for the Health and Human Rights Journal.

Restricting access to abortions does not diminish the need for them. Globally, one in 10 pregnancies end in an abortion, the World Health Organization (WHO) reported.

Mortality rates go up when access to safe abortions is restricted. Deaths caused by unsafe abortions are mainly the result of organ damage, or severe infections or bleeding resulting from the procedure, according to the WHO.

Unsafe abortions account for up to 13 percent of maternal deaths around the globe. The figure does not include suicides related to unwanted pregnancies nor injuries and disabilities caused by illegal procedures.

The correlation between restrictive abortion laws and mortality rates of pregnant women seeking termination refutes the argument that anti-abortion activists are “pro-life,” as the implementation of “pro-life” agendas discriminates against women and threatens, or outright violates their human rights to health and a dignified life.

“Pro-Life (anti-rights) discourse, just like all of the other arguments that have been drawn up to argue in favor of reinstating repressive measures against abortion, ignore, like always, one of the most important factors of this issue: women,” sociologist Fleitas said.

Healthcare is a Human Right, Abortion Restrictions a Form of Torture

The United Nations recognizes women’s sexual and reproductive healthcare as a human right.

The current trends around abortion laws and perceptions of abortion rights to healthcare, despite the backlash, are favorable to women and their reproductive health.

In 2017, the Committee on the Elimination of Discrimination against Women (CEDAW) expanded the definition of gender-based violence against women, to include violations of sexual and reproductive health rights in regard to General Recommendation No. 35.

Earlier this year, Amnesty International adopted their position on abortion to include a call for states to guarantee safe and legal abortion access in a broad manner that “fully respects the rights of all women, girls, and people who can get pregnant,” and not just decriminalization.

Over the past 18 years, 28 countries have altered their abortion laws. All but one expanded the legal grounds to allow abortions for socioeconomic reasons, for the protection of the woman’s health, or without restriction.

Nevertheless, the struggle for progress is uneven across the globe. In 14 countries where unsafe abortion is prevalent, 40 percent of women who have an abortion develop complications that require medical attention, according to the Guttmacher Institute.

The battle for women’s rights to be recognized as human rights, particularly in the case of abortion laws, is far from over. For women in dire need of healthcare access and the recognition of their human rights, like Imelda Cortez in El Salvador, justice cannot come soon enough.

“Whatever has led to the current impasse in law reform for women’s benefit—whether it is called stigma, misogyny, religion, morality, or political cowardice—few, if any, existing laws on abortion are fit for purpose,” Berer says.