After 13 years of organizing, Argentina’s Senate will finally vote on a bill proposed by the National Campaign for the Right to Legal, Safe and Free Abortion to legalize abortions within the first 14 weeks of pregnancy. Win or lose in the country's Senate, the movement has already won beyond the borders of Argentina. 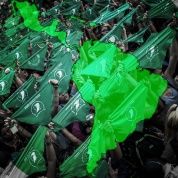 Argentina has shifted the debate and redefined what being “pro-life” means, has socially decriminalized abortion, and inspired movements across Latin America, where around 90 percent of women of reproductive age face restrictive abortion laws.

For decades the political debate on abortion has been divided into two camps: pro-choice and pro-life. In Argentina, activists successfully reframed their struggle for legal, safe and free abortions as a struggle for the life of hundreds of thousands of women (370,000 - 520,000) who undergo unsafe procedures as a result of laws that criminalize them.

The question is no longer life versus choice. Women have unmasked the church and every conservative sector. “The say that all lives are sacred, except ours,” 17-year-old student Sofia Zibecchi told the house of representatives while denouncing national hypocrisy.

For Zibecchi and her fellow activists, it is no longer about being pro- or anti-abortion, it is about recognizing underground abortions happen and women die.

Those who fight for legal abortions call themselves anti-illegal abortion, placing “pro-life” activists in the uncomfortable position of having to recognize they have no interest in addressing the fact that women are dying. “We are not debating whether abortion yes or abortion no,” they say. Abortions are a reality and the question is whether states will continue to turn a blind eye to the women who risk their lives for the right to decide.

In March a nationwide poll by consulting group Synopsis revealed that 53.5 percent of Argentines supported the approval of the law. Three months later, in June, a poll by the University of Buenos Aires revealed 62 percent supported decriminalizing abortion. That same month, as the lower house debated the bill, the campaign mobilized one million people who held a vigil to demand legislative action.

“We have achieved the social decriminalization of abortion,” Elsa Schvartzman, member of the National Campaign, warned legislators.

This victory means abortion is now recognized as a public problem, an issue that requires state action and political debate. Social decriminalization is key for Argentina and the continent because it expands the space of solidarity between people who decide to get an abortion and it creates incentives for politicians to take a stance in favor of reproductive rights.

Colombian activist Catalina Ruiz explained that in Latin America the struggle to get legislative support to legalize abortion is difficult. “Since it is not socially decriminalized, supporting abortion presents a cost for politicians: people won’t vote for them. When there is social decriminalization you become a good politician for defending this cause,” she told El Espectador.

These two victories have helped consolidate a third one: emboldening women and activists across the continent.

In Latin America, only Cuba, Guyana, Uruguay, Puerto Rico and French Guiana allow for legal abortions in all cases within the first 12, 8, 14, 24 and 8 weeks of pregnancy, respectively. In six countries -El Salvador, Honduras, Haiti, Nicaragua, the Dominican Republic, and Surinam- it is totally banned, even when a woman’s health is severely threatened by pregnancy.

In most other countries abortion is only legal on two or three grounds: rape, women’s health, and fetus malformation incompatible with life outside the womb.

Despite restrictions, a report by the Guttmacher Institute revealed that Latin America has the highest abortion rate, with 44 of every 1,000 women undergoing the procedure, and that every year 6.9 million women receive medical care due to abortion-related complications.

To face illegality, women in Latin America have established abortion accompaniment groups and hotlines to provide comfort and information denied by the state.

In Ecuador they are called Comadres (very good friends), in Argentina Socorristas en Red (lifeguards network), in Mexico they are the Maria Fund, in the Dominican Republic the 28 Moons, and the list goes on.

The success of the campaign for legal abortion in Argentina has sparked a renewed interest in forcing the state to fulfill its responsibility to guarantee women’s right to access healthcare, a dignified life, and their basic human right to life without violence, including the violence intrinsic to forced pregnancies.

Last year, after decades of having a penal code imposed by a military dictatorship, Chile recognized the right to legal abortions in cases of rape, when the woman's life is endangered, or when the fetus is malformed.

This July over 40,000 women and activists marched in the streets of Santiago wearing green scarves to demand the legalization of abortion in all cases up to the 14th week of pregnancy. Senator Guido Guirardi, president of the senate’s health commission, has presented a bill to this effect.

In Venezuela, where abortion is legal only if the woman’s life is endangered, feminist movements presented a formal request to the National Constituent Assembly (ANC) demanding the modification of article 76 of the Constitution to “guarantee comprehensive assistance and protection to voluntary maternity.”

The ANC announced they will debate the legalization of abortion at some point in the near future.

In Brazil, five days before the Argentine Senate is set to debate the abortion bill, the supreme court began rounds of public hearings in a process to determine whether the country’s restrictive abortion laws approved in the 40s are incompatible with the 1988 constitution, which guarantees the right to a dignified life and access to healthcare.

In Ecuador, the office of the ombudsman presented a reform to the penal code to legalize abortions in cases of rape while women and feminist groups have begun laying the groundwork for a national campaign for legalizing abortions in all cases.

Not Everything is Progress

According to research done by The Guardian United States-based groups like Human Life International, 40 Days for Life and Heartbeat International are “training anti-choice activists, opening centres and plowing money into the region.” Their investigation revealed that U.S. religious organizations have “poured in millions” and helped organize anti-choice groups in at least 20 countries.

Conservative and religious groups have also responded to Argentina’s victory. In July and August, anti-choice activists in over 10 countries gathered in front of Argentine embassies to reject the possibility, albeit difficult, of an approval of the free abortion bill.

Foreign and regional organizations like the aforementioned and the rise of evangelical political parties are serious obstacles to women’s rights.

In Brazil, evangelical legislators introduced a bill to totally ban abortion. In Argentina, the Catholic church has played a key role in mobilizing public opinion, organizing protests, and lobbying in Congress.

In El Salvador, where a woman can be sentenced to prison for up to 50 years for having an abortion, this year a bill to legalize abortion on three grounds failed to pass congress. In the Dominican Republic, repeated attempts to modify the penal code to allow for abortion on three grounds have been effectively derailed by the Episcopal Conference which has argued there is no right to “kill,” only the right to life.

This is why advocates for free and safe abortions are increasingly advocating for the effective separation of church and state.

In Venezuela, for example, activists have demanded the ANC enshrine the secular character of the state. In Chile, activists are also wearing orange scarves demanding the separation of church and state.

What to Expect on August 8

In Argentina, despite winning the debate in the lower house with 129 votes against 125, the senate is unlikely to approve the bill. Current estimates reveal 35 votes against, 32 in favor and three undecided.

In a confusing shift, senators who oppose legalizing abortions are arguing the bill should be debated as is, while those who claim to support legalization have introduced changes that limit women’s right to abortion, including lowering the time limit from 14 to 12 weeks of pregnancy.

Senators were unable to reach consensus, and on Aug. 8 legislators will first have to debate and decide if they will hold a vote on the modified or original version of the bill.

Whatever the senate decides they will have to do so surrounded by at least a million Argentines who demand the legalization of abortion.

Argentines will not be alone. Marches and solidarity acts have been organized in Brazil, Uruguay, Chile, Ecuador, Bolivia, Costa Rica, Mexico, Colombia and Peru.

“We will win abortion in the streets,” feminists across the region stress as they argue that, on Wednesday, the world will see the extent of the green tide that is sweeping Latin America.

This August 8 will be another day in the historic struggle for liberation. “The patriarchy will fall! It will fall!” as women in the streets of Argentina warned while they celebrated their victory in the lower house.