The Professor &amp; The President: Who’s the Bully?

Or How Harvard Exercises Power

It began with a call from his distraught daughter, writes Harvard professor Ricardo Hausmann. On national television, Nicolas Maduro, Venezuela’s president, had threatened the good professor with a legal investigation. And the professor’s daughter was worried. So too were the Harvard Crimson, whose editorial staff challenged President Maduro’s alleged “bullying,” and the Boston Globe, which promptly published a Hausmann missive. Lest one fears for the professor’s wellbeing, he assures us that he is free and unafraid, adding that he has “the protection of the U.S… the protection of Harvard.” Now we can all feel good, the USA’s robust free press, together with its august academic institutions, and the state itself, appear to be standing for academic freedom and empowering a lowly professor to speak truth to presidential power. Closer scrutiny suggests that quite the opposite may be true.

So how did the professor come to do the Joropo with the president? The latter was most outraged by an opinion piece Professor Hausmann co-wrote for Project Syndicate, “Should Venezuela Default?” President Nicolas Maduro recognized that Hausmann is an influential actor on the international banking scene and that his default prescription would only cause more fear, uncertainty and doubt.

And risk perception has a price. Hausmann’s article opens with exactly that measure. “Markets fear” that Venezuela may default on its debt and the price of this fear is that the interest rates on Venezuelan bonds are significantly higher than those on Mexico or Nigeria. This, in turn, has a negative impact on the lives of regular folk. Although Hausmann fails to note effective government countermeasures to protect the poor, the thrust of his remarks are true – higher interest rates hurt ordinary people… while the creditors’ returns are all the more secure. 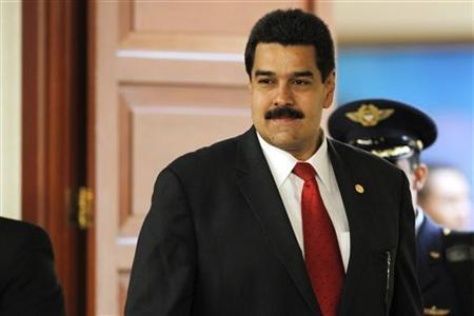 In a man-bites-dog like inversion of roles, Hausmann, a JPMorgan Chase consultant and former chief economist at the Inter-American Development Bank, concludes that to “default on 30 million Venezuelans, rather than on Wall Street, is a… signal of moral bankruptcy.” The article had its all too predictable outcome. Interest rates shot up even more, settling back somewhat only after vigorous assurances from President Maduro.

All of this should immediately dispel any image of Hausmann as a cloistered academic analyzing reams of computer printouts in some basement office or lost in the stacks of Widener Library. In fact, Hausmann is a power player on the global scene and his dance with Venezuela’s revolutionary leadership began long ago.

Not immediately apparent from his Harvard CV is the gravity of his 1980s involvement in the Venezuelan government. Specifically, in the late 1980s, Hausmann was part of President Carlos Andres Perez’s economics cabinet. They implemented an IMF-style austerity program setting off the 1989 Caracazo—a popular rebellion put down by a massacre claiming over a thousand lives. Surely, given the resolve it demonstrates, this is an impressive fact meriting its own CV entry!

This success was followed by his promotion to Minister of Planning in the early 1990s and then, after Carlos Andres Perez was forced out of office for embezzlement, Hausmann’s career advanced with him becoming the Chief Economist of the Inter-American Development Bank. Today, in addition to his Harvard gig, Hausmann is an advisor to many banks, governments and inter-governmental bodies.

Besides the massacre, none of this is particularly objectionable. Indeed these are the hallmarks of a successful career within the international mandarinate that governs the global economy. Of course, this belies the image of the innocuous and vulnerable professor that opens Hausmann’s Globe piece. There he also suggested the improbability of an American president attacking a professor; were it to happen, he speculates that an impeachment could follow. But there is precedent involving a powerful president attacking a real professor.

Ronald Reagan and the Professor

Consider the case of Ronald Reagan and E. Bradford Burns. A UCLA historian of Latin America, Burns debunked Ronald Reagan’s claims about Sandinista Nicaragua in a short 1985 article. At a dangerous moment in the Cold War, this was a truly brave act, one that could damage careers and worse. In fact, a well-known, award-winning actor, Edward Asner, had his CBS series, the Lou Grant Show, cancelled in 1982 after criticizing Reagan’s Central America policies. Solidarity activists in Burn’s Los Angeles lived in a charged atmosphere facing the real threat of thuggish repression from any number of sources. By 1988, activists reported death threats and alleged cases of kidnapping and rape. At the same time, the establishment in Southern California thrived on federal investment in Reagan’s war economy. Burns’ dissent, which undermined the rationale for Central American intervention and therewith part of the justification for the lucrative arms build-up that made Reagan so popular with regional elites, was therefore a real example of a humble professor speaking truth to power.

Ronald Reagan’s response was a televised attack that labeled Burns a purveyor of disinformation, and in vintage Reagan, the President promised to “pray for [Burn’s] students.” It also fueled the re-emerging academic McCarthyism and Oedipal resentments of folks like David Horowitz, who would later publish his infamous, The Professors: The 101 Most Dangerous Academics in America. But people fought back; with good humor, Burns recalled a student’s response, “As a citizen, I ask God to help President Reagan; Professor Burns' students are doing fine.”

As we weigh the differences between Burns and Hausmann, it is worth noting the way in which each exercised power. Two years after Reagan’s attack, Burns won a distinguished teaching award. Notwithstanding his well-received research, Burns’ passion was for teaching. A former student recalls Burns’ view that, “We must learn to teach better... We must constantly transfer our conviction of the significance and relevance of history to the young. Tedium has no place in our lecture halls... We must convey that excitement.” And this was part of a broader perspective on social change, “Go ahead and do your research, publish your books,” he advised fellow academics, “A few of your colleagues will read and enjoy it, but if you want to change the world… teach undergraduates.” For the cynical, this idealism may be the long game of a presently enfeebled left, but it is certainly true to the picture that one imagines on hearing the word, “professor.”

More than a suave professor or deceptive editorialist, Hausmann is a man of action. No teaching awards adorn his CV. Perhaps he received some, but these are not deemed important enough to add. Since the early 2000s, he has been associated with the Venezuelan opposition’s hard right. Working for María Corina Machado’s Súmate to routinely predict the defeat of the Chavistas via statistical analyses anticipating election outcomes only to have their claims falsified by real world voters, Hausmann is a partisan actor. Having failed at running the Venezuelan economy in the late 80s and into the 90s, he now attacks from the secure parapets of Harvard. As noted, his essay impacted the markets in entirely predictable ways.

Harvard as an Imperial Enterprise

It would behoove those interested in the development of the global economy to more closely, indeed, to forensically, examine the connections between Harvard, its faculty, and the economic policies of many governments. Beyond the scope of this article and the capacity of this author, such scrutiny should go beyond mere intellectual influence to uncover the interests involving the institution, its investments, its faculty, the advice they offer, and the actual flow of material benefits.

One gets a glimpse of what these may be in VERITA$: Everybody Loves Harvard, a documentary that explores the connections between Harvard and Russian economic policies. The late director Shin Eun-jung examined the relationship between the Harvard Institute for International Development and Russia’s conversion to a market economy. This was the Harvard Institute’s largest project. Earlier, it was involved in the financial liberalization of Indonesia and helped extend the Washington Consensus to Zambia, Kenya and Pakistan.

Receiving in excess of $40 million in grants for its Russia work, the Harvard Institute’s policies were adopted by end running the democratic process and helped enrich the privatizer of the Russian economy, Anatoly Chubais. Today a wealthy entrepreneur, Chubais is also an advisor to JPMorgan Chase. Together with Chubais, the Institute established the Russian Privatization Center which received more than $147 million in foreign funding that would have to be repaid at some point by the Russian people. With no constitutionally-defined role, the Center soon became fully embroiled in Russia’s corrupt transition to a market economy… and in benefiting the Harvard Management Company in the order of millions of dollars until the Asian banking crisis of the late 90s. So extreme was the corruption that even the US Justice Department investigated the mess. It later caught up with Harvard and the Institute, alleging false claims and conflicts of interest. It sued for $1.2 billion and settled in 2005 for $31 million, the largest suit in Harvard’s history according to Shin.

None of the foregoing suggests any kind of similar behavior on the part of Chubais’ fellow JPMorgan Chase advisor, Hausmann. But it does dispel the myth of Harvard as a purely academic institution. Instead, Harvard is clearly an economic actor on a global scale. Its faculty, especially those with Hausmann’s CV, have to be assessed in this light.

For those of us who respect Venezuelan sovereignty and admire that country’s attempt to transform its economy into one that works for working people, we have to acknowledge that this is a difficult time. Venezuela’s Revolución Bolivariana faces difficult choices between deepening the economic transformation with its attendant dislocations and accommodating parts of the splintering opposition. In this context, Hausmann’s intervention and feigned concern for “30 million Venezuelans” is a deft move likely aimed at aggravating an acute hard-currency shortage and provoking a political crisis.

If there are any doubts as to Hausmann’s concerns for the poor, we must ask where those rested when he was in power and implementing a harsh austerity program. Hausmann’s own values are hinted at when he castigates Nicholas Maduro by calling the president a “tropical thug.” One can and should denounce thuggish behavior, but his adding the adjective “tropical” casts things in a different light. Those of us from the Global South or familiar with ruling class racism readily recognize what is intended by the word.

Rather than suggesting any debate over academic freedom and the rights of Professor Hausmann, the media would be best advised to look at his intervention and President Maduro’s rebuke in the light of an extended class war playing out on a global stage. A critical media analysis will reveal that the partisan Hausmann knows how to navigate between the super-charged rhetoric of a country in the throes of an intense class struggle and the placid world of his university on the banks of Cambridge’s Charles River. Venezuelan rhetoric reflects the class struggle and also a different political rhetoric.  Alma Llanera, Venezuela’s “second” anthem, celebrates claveles de pasión – “carnations of passion” – while Hausmann’s numbers games on the Charles River speaks to a coiffed banker’s calm exercise of power protected by the United States, protected by Harvard.