May 5 marks 200 years since the birth of philosopher turned economist and organizer Karl Marx. Today, the concepts he developed to explain how the capitalist production works are still useful tools for interpreting – and, as Marx would have wanted – transforming our world. 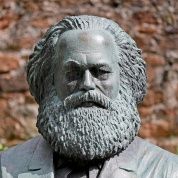 His work is a living testament to how we understand the world around us, the social and economic arrangements that shape our lives and organizing to reverse oppression, inequality and – ultimately – human misery and unhappiness.

Although Marx is mostly remembered for upholding the idea of a communist society in which private property ceases to exist and workers own the means of production, one of his most relevant concepts is that of dialectical materialism, which transformed philosophy and shaped sociological thought.

Dialectical materialism is the revolutionary notion that the real world is not only the product of ideas, as the Young Hegelians of Marx's youth believed, but that the production of the conditions to sustain material life conditions social life and gives rise to consciousness.

Workers' consciousness and ideas arise not from some metaphysical force but rather from the conditions in which they must reproduce the material conditions for their lives – conditions that, in industrial Europe, were dominated by the ruthless exploitation of labor.

In one of Marx's most famous works, Das Kapital, he explained how the capitalist mode of production is built upon the necessary extraction of surplus value from workers' exploitation for capitalist profit. The less you pay and care for workers wellbeing, the more profit generated for the capitalist. This dynamic remains prevalent across the globe.

Marx believed these conditions would inevitably lead to a workers' revolution to seize the means of production and overthrow the capitalist mode of production.

In a socialist economy, workers would be rid of alienated forms of labor.

Alienated labor is one of his most tangible concepts, and a phenomenon that continues to dominate social structures and threaten our humanity because precarious labor produces prized commodities that provide consumers with status and a sense of self-worth on a never-before-seen global scale.

The apparently intrinsic value projected onto things such as cars and iPhones, which seem to hold value not as a result of the labor invested in them but express the issues of alienated labor and commodity fetishism which Marx explained lie at the core of capitalist production.

However, for all the destitution produced by capitalist social relations, Marx envisioned a way out.

Faced with exploitation, alienation and misery, workers would rebel, seize the means of production and overthrow the capitalist system, creating the base for a more equal and just form of social relations in which opulence and hunger have no place.

"Working men of all countries, unite!" Marx and his comrade Friedrich Engels rallied in Europe together with the Communist League. That was the last line of Marx and Engels' Communist Manifesto, written as Marx was returning to Germany from exile to take part in the 1848 revolution, which eventually failed.

Two hundred years after his birth, we are yet to witness a true socialist economy in which workers, not CEOs and states, own the means of production and productivity is oriented to satisfy needs rather than whims.

However, the utopian idea embodied in Marx's criticism and proposals continues to inspire workers, intellectuals and social movements across the world. "The history of all hitherto existing society is the history of class struggles," the manifesto declares.

We see it today, from anti-austerity social organization and protest in Argentina and Puerto Rico to struggles for land redistribution in India. Urban and rural workers, feminists, environmentalists, students and Indigenous nations continue to nourish the 'movement against the existing social and political order of things,' which so motivated 1,800 communists in Europe.