Colombians will elect a new president on June 17, choosing between former Senator Ivan Duque and long-time legislator and former Mayor of Bogota Gustavo Petro. Their platforms differ on every policy matter, but most importantly both have very different connections to paramilitarism. 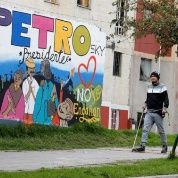 Duque, candidate for the Democratic Center Party, has received the support of people with links to paramilitary groups – including his political benefactor, Alvaro Uribe – while Petro has denounced the infiltration of drug traffickers and paramilitarism in Colombian politics since 2004.

Most recently Duque was endorsed by Ramiro Suarez, former mayor of Cucuta, who is serving a 26-year sentence for murder after two former members of the paramilitary group United Self-Defenders of Colombia (AUC) accused him of having ordered the killimgs of two political rivals in early 2000.

Duque's political mentor, Uribe, has a long list of acquaintances and ongoing cases against him due to his links with paramilitary groups and alleged crimes against humanity.

Petro, on the other hand, was recently endorsed by Claudia Lopez, former vice presidential candidate for the Colombia Coalition that backed Sergio Fajardo and one of the most prominent researchers on para-politics, which she defines as "a national phenomena of massive capture of political representation and public power by drug traffickers and paramilitary forces."

Words such as FARC, Venezuela and Castro-Chavism have been used by Duque and other key political actors, including the Colombian media, to discredit progressive candidate Petro and generate fear within Colombian society.

However, the real threat to Colombian peace, stability and human rights is not a demobilized guerrilla or dead Latin American leaders, but rather the deadly combination of political power and paramilitaries.

In 2006, the last year of Uribe's first presidential term, Colombia's Supreme Court revealed that 33 percent of Colombian senators, 15 percent of representatives and at least 250 public servants had links with narco-paramilitarism. State institutions – including the legislature, security forces and prosecutorial agencies – had been successfully penetrated by extreme right-wing paramilitary groups responsible for massacres, harassment and intimidation in rural areas.

The political scandal shattered the traditional Liberal and Conservative parties, Radical Change and the National Unity party. All with proven links to paramilitary groups, these parties have historically supported Uribe and are now supporting Ivan Duque.

Between 2006 and 2016, the Attorney General's Office registered 519 disciplinary processes against state officials due to their links with paramilitary groups in legal processes related to homicides, threats, electoral pressure and financing political campaigns.

In 2014, an ombudsman's report revealed that the AUC's successor, known as 'Bacrims' (from the Spanish abbreviation for 'criminal bands'), was present in 27 of Colombia's 32 departments.

Since the Colombian government signed the peace agreement with the Revolutionary Armed Forces of Colombia (FARC) in 2016, paramilitary presence has increased. In 2017, the Peace and Reconciliation Foundation found that of the 242 municipalities where the FARC were once present, 74 had been taken over by paramilitary groups.

In addition to involvement in drug trafficking, these groups engage in homicide, illegal mining, arms trafficking, extortion and sexual exploitation of minors. They are known to target social organizations and activists who protect their land.

Between January 2017 and June 2018, more than 200 social leaders and human rights defenders were murdered in Colombia.

The power paramilitary groups hold today is the product of their capability to capture portions of the state and work together with politicians, elected officials and public servants in an alliance to maintain the status quo.

During Uribe's presidency (2002-2010), the commander of the Northern Self Defense Bloc, Rodrigo Tovar, penetrated the Administrative Department of Security (DAS): Colombia's former intelligence and counterintelligence institution.

In 2006, Rafael Garcia, former head of information technology at the DAS, accused Jorge Noguera, appointed by Uribe to lead the DAS, of having allowed narco-paramilitarism to infiltrate the institution.

After the accusation surfaced, Uribe stood by Noguera and accused Colombian reporters of siding with terrorism simply for writing critically about the former DAS director.

Noguera was later sentenced to 25 years in prison after being found guilty of homicide and participating in the creation of paramilitary groups. In 2017, he was sentenced to another seven years for persecuting journalists, union leaders, politicians and justices who opposed Uribe.

Also in 2006, Uribe founded the now-defunct 'Colombia Democratica' (Democratic Colombia) party together with his cousin Mario Uribe and Alvaro Garcia Romero. Mario Uribe was sentenced in 2011 to over seven years in prison for links to paramilitary groups, while Garcia was sentenced to four years in prison after the Supreme Court ruled he had embezzled public funds to finance the creation of right-wing paramilitary groups, and had orchestrated the massacre of Macayepo in which the AUC murdered 36 campesinos.

In 2016, Uribe's brother Santiago was captured by the state's prosecution service for alleged homicide and participating in the creation of the paramilitary group known as The Twelve Apostles.

Beyond Uribe's personal links to convicted para-politicians and the fact that paramilitary infiltration occurred during his tenure as president, as president he also led efforts to undermine investigations into parapolitics.

In 2007, when the Supreme Court ruled that paramilitarism wasn't a political crime and thus was not subject to pardons, he accused the court of having an "ideological bias" against peace. A year later, Uribe attempted to remove the Supreme Court's ability to investigate legislators.

Today, Duque has proposed a judicial reform previously proposed by Uribe which would eliminate the Supreme Court, the Constitutional Court, and the Special Jurisdiction for Peace (JEP) and unify them into one single high court.

Political opponents have criticized the proposal, arguing it would severely hamper citizens' protection mechanisms and threaten the peace process by discarding a key part of the Peace Accord with the FARC: the JEP.

Others believe the judicial reform will serve to directly benefit Uribe, who has 28 ongoing judicial proceedings for a series of crimes, including false positives, the death of a human rights defender, illegal wiretapping and the massacres in La Granja and El Aro perpetrated by paramilitary groups in the 1990s.

Parapolitics, which can be defined as the symbiotic relationship between politicians with state power and extreme right-wing illegal armed groups to maintain control with impunity, is Uribe's inheritance to Duque – a legacy Duque seems unwilling to renounce.

As senator, in 2006 Petro uncovered paramilitary penetration in the departments of Sucre, Cordoba, Cesar and Magdalena. He then publicly denounced Uribe, revealing that Uribe's 2002 campaign had received funds from Enilse Lopez, sentenced for links with the AUC.

Petro has never belonged to a political party with links to paramilitary groups, nor is he endorsed by them.

He has been criticized for spending 10 years in the M-19 guerrilla movements, after which he switched to political life. As a senator, Petro strongly criticized the FARC for their acts of violence and distanced himself from his former party, the Democratic Pole.

There is a common phrase that reflects popular wisdom: tell me who your friends are and I’ll tell you who you are.