On September 4th Colombian immigration authorities handed over Lorent Saleh to the Venezuelan Intelligence Service, SEBIN. According to his mother, Yamile Saleh, the 26 year old had been living  intermittently for a period of two years, having entered the neighbouring country using false documents. 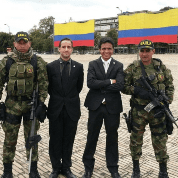 During his time in Colombia, Saleh had managed to successfully gain access to Bogota´s principal School of War, alongside accomplice Gabriel Valles, where they received classes in military strategy. Actions which were eventually detected by Colombian security forces and which were a key factor leading to his arrest.

Following his deportation to Venezuela, the release of a string of videos in quick succession featured Saleh revealing details of a terrorist plot to plant bombs in discos and liquor stores in the Venezuelan border state of Tachira, as well as to carry out selective assassinations of  grassroots political leaders who support the government.

In the videos, Saleh also claims to be one of the ring leaders of a network of at least 20 "elite" leaders, who have access to bombs and firearms, as well as to obvious significant financial support. He claims to have been receiving training from the former police force in Colombia, who have experience "shooting guerrillas."

September 4th was not the first time that Saleh´s path had crossed with Venezuelan law enforcement agencies.

Born in San Cristobal in 1988, Saleh left his studies in foreign business in order to begin his political trajectory working as one of the most outspoken and radical leaders of the far right student organisation known as JAVU, or Active Youth United Venezuela, formed in 2007.

As a group which openly based itself on OTPOR, the Serbian political youth group which worked in conjunction with the U.S. to bring about a soft coup against Slobodan Milosevic, president of the Federal Republic of Yugoslavia in 2000, JAVU is one of the many Venezuelan student groups to have received financial support and training from the US National Endowment for Democracy (NED), as well as from USAID (US International Development Agency).

The group has been one of the most radical in opposition against the Venezuela government since its inception and has consistently tried to secure foreign intervention in the country, particularly by the U.S. government. JAVU headed the infamous hunger strike of February 2011, when its leaders demanded that the Organization for American States (OAS) conduct an immediate human rights mission to Venezuela in order to investigate its claims surrounding the existence of political prisoners. A mission which the organization had allegedly promised JAVU it would carry out, but which had not materialized.

In January 2011, Saleh became the president of the NGO, Operation Liberty International (OLI) after the National Board of JAVU claims that it took the decision to "distance" itself from Saleh. A number of other JAVU militants also joined OLI.

Founded in Caracas, OLI´s headquarters are located in Costa Rica, where, according to his passport, Saleh met up several times with fugitive and former head of Venezuelan state intelligence agency DISIP, Henry Lopez Sisco, now wanted by authorities for his role in three massacres committed in the 1980s against leftist activists in Venezuela. Saleh also met with Nestor Gonzalez Gonzalez, a former military general who played a leading role in the 2002 coup against the Venezuelan government, and who also lives in Costa Rica, evading prosecution.

Four months after becoming the OLI´s president, Saleh was arrested for his role in inciting violent protests and resisting authorities outside a Barinas courthouse during the trial of General Delfin Gomez Parra, a Venezuelan high ranking military official arrested and charged with corruption.

Saleh was later released on parole on the condition that he regularly present himself to Venezuelan authorities, a legal order which he is alleged to have flouted with his flight to Colombia and which was one of the factors that led to his most recent arrest. More recently, he also participated in the relaunch of the Neonazi group, the National Alliance for Colombia, under the new name of the Nationalistic Alliance for Liberty on July 6 2013 in Bogota.

As a vocal spokesperson of the Venezuelan opposition and leader of a so called "human rights group," Saleh's arrest has provoked an explosion of reactions across the region, including from former Colombian President, Alvaro Uribe, who has been repeatedly linked to paramilitary groups. Uribe attempted to bring a vote of no confidence against Colombia's foreign minister in retaliation for the deportation.

Yet support for the young right winger not only came from Uribe. According to Saleh's mother, she received telephone calls from three other ex-presidents in the region, including Andres Pastrana (Colombia), Vicente Fox (Mexico) and Oscar Arias (Costa Rica) in the aftermath of her son's arrest. Calls which have led to speculation surrounding the relationship between the militant and the former heads of state.

"This can all be traced back to the Fiesta Mexicana," said Venezuelan Minister of Domestic Affairs, Peace and Justice, Miguel Rodrigez Torres, making reference to a political event organised in October 2010 in Mexico City.

Financed to the tune of over US$50,000 by Cedeño, the meeting was attended by prominent members of the Venezuelan hardline student opposition who received training in subversion tactics. It was organised with the support of US-Cuban Republican Otto Reich, advisor to the Reagan and both Bush administrations, and Alvaro Uribe. Whilst Saleh was registered to attend, he eventually did not participate, although he had connections to many of those present, and specifically to Alvaro Uribe.

"Behind this are big interests and big finances, we´re talking about an international network which sought to destabilise our country," said Venezuelan legislator for the ruling Socialist Party, Robert Serra, in an exclusive interview with teleSUR.

The case has provided further weight to the Venezuelan government's claims that NGOs are being used as vehicles by rightwing groups to sabotage Venezuela's socialist project. Whilst the country's national law strictly prohibits political parties from receiving funding from abroad, NGOs have become the principal benefactors of funds from U.S. agencies such as USAID and the NED in recent years.

In 2013 alone, the NED administered hundreds of thousands of dollars to Venezuelan youth groups, aimed at promoting a "new generation of political leaders."