Tupac Katari was born in 1750 as Julian Apasa Nina. 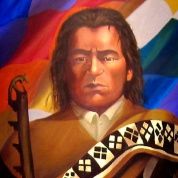 He later changed his name to honor Peruvian rebel leader Tupac Amaru II and Tomas Katari, the leader of the Aymara people – an Indigenous nation that spreads across Bolivia, Peru and Chile.

Katari dedicated his life to fight for independence and end the exploitation of his people by the Spanish colonizers.

He and his wife, Bartolina Sisa, launched one of the most powerful rebellions in Bolivian history in 1781.

They seized La Paz – Bolivia’s capital – with an army of 40,000 people and set up a court in El Alto, which lasted for 184 days before the Spanish captured and brutally executed them. Sunday marks the 234th anniversary of his execution.