Juan Peron is the most important political figure in Argentina, with reams of paper dedicated to himself and his followers, but surprising little ink has been spilled over his, and the movement named after him, Peronism's ideology.  Perhaps because of its near undefinable nature, that it neither sits comfortably on the left, right nor center or because of the number of ideological disperse groups and politicians that call themselves Peronist. 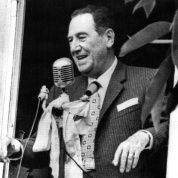 Much of this has to do with Peronism's founder, and his ability to bring in broad sectors of Argentine society into his political program, broadly against imperialism and for nationalist workers rights and political sovereignty.

However there are a few key points behind the ideology of Peron himself and Argentina's most political movement Peronism that can be gleaned.

Peron called his movement “Justicialism”, a blending of the Spanish words for social justice and this is also the name of the party of Argentina's current president Cristina Fernandez.

It is an idea founded on Christian social values that has three basic principles: social justice, political sovereignty and economic independence. To do this Peron said his movement was in a “third position” which counterposed itself equally to capitalism and communism. He also aimed to create a social model of an organized community with direct state intervention to mediate between labor and capital. Although not the same as a traditional Scandinavian welfare state, the model has similarities in its mixed economy and a central role for Unions.

In a speech in the Congress in 1948, Peron himself said, “Peronism is humanism in action; Peronism is a new political doctrine, which rejects all the ills of the politics of previous times; in the social sphere it is a theory which establishes a little equality among men… capitalist exploitation should be replaced by a doctrine of social economy under which the distribution of our wealth, which we force the earth to yield up to us and which furthermore we are elaborating, may be shared out fairly among all those who have contributed by their efforts to amass it.”

The populist program of higher wages and better working conditions, which was actually developed by the Public Works minister Juan Pistarini could well be the classic ideological core of Peronism, but it was always dependent on the structural circumstance of Argentina.  For example, in the late 1940s, Peronism was more concerned with the women's vote and the export market, and in the 1990s attempting to rebuild Argentina under a neo-liberal pro market guide.

Indeed, over time it has been an odd mix of socialism, liberalism and populism Peron himself, and therefore the movement became a symbol of and a champion of what he called the “shirtless ones,” (descamisados) appealing to the dispossessed, labor, youth and the poor.

Peronism accepts that the state should coordinate society for the common good and that it can do this without serving class interests.

Peron, and Peronism is hostile to many of the tenets of classic liberalism, although at times concedes such as considering that democratic and republican institutions are the only ones that can guarantee freedom and happiness for the people, and a political opposition is admitted as necessary.

But Peron was also hostile to Marxism, thinking that “forced collectivism” robs individuals of their personality, even though he garnered many supporters from the communist left during the seventies thinking that he, and his ideology would be the only way for Argentina to implement a communist state. Yet Peron thought that class conflict could be transcended by a social collaboration mediated by the state.

It was mostly through this ideological and structural blend that Peron was able to split every party and political formation from the extreme Catholic Right to the Communist Left and line up the dissidents behind his banner. As Carleton Beals wrote, his leading opponents had nothing to offer except to complain of the lack of civil liberties. Their cry for freedom was somewhat suspect, however, as they had never respected it when in office.

It was under Peron that a version of nationalized state capitalism, and an elimination of foreign investors was initiated in Argentina. He used nationalism, unlike his European counterparts, as a weapon of anti-imperialism. Peronism under Peron was Bonapartist in its manipulation of  the social classes on behalf of industrializing an underdeveloped country and challenging dominant American imperialism. His style of leadership was one of a leader who took power in a power vacuum when no single class is in the position do so, and using reformist measures to win the radical support of the more populous class.

Peron and Peronism also has to be viewed as a stage in the battle of Latin America for economic independence which is still yet to be achieved with at home the oligarchical structures still intact, and foreign manipulation in the country.

The nation's current president, Cristina Fernández identifies herself as a Peronist and has loosely made connections between herself and Peron's wife, Evita. Some of her bigger ideological and policy choices have included  the battle with Vulture Funds which refuse to compromise on debt repayment and threaten Argentina’s financial markets. She also continues to press Great Britain over the sovereignty of the Falkland/Malvinas Islands, and she has identified her administration with those of Cuba and Venezuela. These issues brought her some support and are in line with the nationalist, anti-imperialist and economic independence ideas of Peron.

Her and her husband's success serve as a reminder of the remarkable durability and ideologically flexible appeal of the Peronist "brand" in Argentine politics. Nestor Kirchner and Cristina Fernandez's political dominance should be considered part of the trajectory of Peronism. Partly because of the influence on the structure of Argentine society, and the Kirchner's privileging of the lower classes as the key political actors, with the state as mediator as well as their anti-imperialist independence line, the Kirchners fit directly into the Peronist legacy, a legacy that looks like it will never leave Argentina.

Eva Peron at the Heart of Women’s Vote in Argentina