Colombia’s far-right President-elect Ivan Duque, considered by many to be a frontman for former right-wing Colombian President Alvaro Uribe, is set to be sworn in Tuesday as he faces yet another round of speculations and scrutiny over his links to brutal paramilitary groups in the country as Uribe faces yet another investigation into his past links to the right-wing militias. 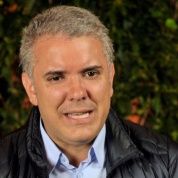 The duo's positions form the centerpiece of a Colombia drenched in the blood of social inequality, the ever-present foundation that gave rise to over half a century of civil war and paramilitarism.

Duque, like Uribe, rallied behind the 'No' vote during the 2016 plebiscite on the peace agreement between the Colombian government and the former guerrilla insurgency turned Revolutionary Alternative Force for the Commons (FARC) political party.

Duque and his party have already begun their assault on the peace process as Uribe’s party pushed for two changes to the application of the Special Jurisdiction for Peace law that constitutes a central part of the peace agreement between the Colombian government and the former Revolutionary Armed Forces of Colombia (FARC).

The first modification by Democratic Center party bans the JEP from making declarations or revising evidence when there is extradition request for former guerrilla fighters or state security forces. The JEP will limit its role to verifying if the crime was perpetrated before or after the 2016 peace agreement signed between the Colombian government and the former FARC.

The second change effectively halts all judicial processes against state security forces investigated for crimes committed during Colombia's internal armed conflict by requiring Congress to create a special tribunal with new justices within the JEP. The creation of an exclusive tribunal to try police and military members requires a constitutional reform.

In the same vein, Duque was the main plaintiff in the case that led Colombia's Constitutional Court, in May 2017, to remove much of the legislative 'fast track' authority required to pass laws to implement the accord. It's one of the key reasons so many of the legal commitments have not been enshrined in law, according to ColombiaPeace.org.

Duque has referred to Chapter 4 of the peace accord, which deals with the coca crop-substitution plan, as the "disastrous chapter." Instead, he supports a return to widespread forced eradication employing toxic aerial herbicides that destroy other crops and poison the environment and people in general.

Duque has also called the legal process of reintegrating former FARC guerrillas into civil society as being too lenient, hence a "monument to impunity." If elected, he's promised new stringent measures that weren't negotiated during the peace talks.

Last August, the Constitutional Court ruled that the coming three presidential terms are required by law to adhere to the terms detailed in the peace agreement and cannot alter it. However, a Duque electoral victory signals that all bets are off and years of peace negotiations between the Colombian government and FARC representatives in Cuba would have been for naught.

Reneging on the 2016 peace accord could throw the country into even greater turmoil: greater in a sense that rural violence has not subsided since the agreement was signed. At least 60 former FARC members and more than 200 social leaders and human rights defenders have been murdered in Colombia since January 2017. This has been the case during the presidency of Juan Manuel Santos, someone who actively supported the peace process.

Duque has also promised to scrap peace negotiations with the National Liberation Army (ELN) guerrilla movement, which are currently taking place in Cuba.

Secretary-General of the United Nations Antonio Guterres, who lived in Colombia for a decade while serving as the UN High Commissioner for Refugees, weighed in on the matter during a visit to the country in January. "There's no excuse for armed violence at all. Peace is the only answer to development and poverty problems."

He also addressed the number of human rights abuses, which have continued to climb despite the presence of a special U.N. political mission on the ground.

However, the Colombian government denies the existence of paramilitary groups, which are often accused of murders and other human rights violations. And if one follows the money, follows the connections, it soon becomes apparent that Duque has received support from individuals with links to such groups.

Take his benefactor, Uribe, for example. He's embroiled in ongoing court cases involving crimes against humanity, as well as alleged links to paramilitary groups. When Carlos Areiza – a key witness in a case against the former president – was murdered in April, Uribe tweeted that he was "rightfully dead." Out of the 12 key witnesses in the investigations against him and his brother Santiago Uribe, nine have been killed so far.

Uribe's sins go beyond paramilitaries as the former president is due to appear in front of the Colombian Supreme Court in Septemeber over charges of bribery and fraud. Court evidence against Uribe, who received the most votes in the country’s Senate elections, includes testimony, audios of intercepted calls, voice messages, and Uribe's lawyer visiting a jail where the key witness against him, Juan Monsalve, was being held.

Take Luis Alfredo Ramos, Duque's campaign manager. He spent over three years in prison for aiding paramilitary groups. Colombia's Supreme Court requested that he serve a total of nine years, and could tack on six more years to the original sentence.

Duque also appointed Nancy Patricia Gutierrez, a former president of the Colombian Senate, as the new minister of the interior. Gutierrez was investigated by Colombia’s Supreme Court for links to paramilitary groups in 2008.

Gutierrez was acquitted in 2014 after the top court ruled there was not enough evidence to continue the investigation against her, but social organizations, who have seen hundreds of community and social leaders killed by paramilitary groups, have been voicing their discontent and concern over her appointment.

The Supreme Court concluded, in 2006, that a whopping 33 percent of the country's senators and 15 percent of representatives were linked to narco-paramilitarism groups responsible for massacres, the displacement of people from rural areas and other human rights crimes. It was also revealed that multiple state institutions had been infiltrated by these groups.

The foundation of Colombia's skewed social fabric dates back to Spanish conquistadores, followed by colonial elites, running roughshod over territory named in honor of Christopher Columbus. The process gave birth to the latifundios: immense amounts of land in the hands of the few. And it stands firm today, after more than half a century of civil war, which claimed the lives of over 220,000 people and displaced about seven million more.

Another historical fact is a good indicator to foresee what a Duque presidency would entail. That history was acknowledged by Colombian President Juan Manuel Santos, who in 2016, admitted state responsibility for the murders of thousands of Patriotic Union (UP) party members three decades prior. The leftist political group was formed from members of the FARC guerrilla movement who agreed to a previous peace treaty in the mid-1980s.

Approximately 5,000 UP members and supporters were killed by right-wing paramilitary groups, often working in tandem with the state, according to Reuters.

"That tragedy should never have happened, and we must recognize that the government didn't take sufficient measures to impede and prevent the assassinations, attacks and other violations even though there was evidence the persecution was taking place," Santos said. He promised to "take all the necessary measures and to give all the guarantees to make sure that never again in Colombia will a political organization have to face what the UP suffered."

Despite his pledge, former FARC members – at least 60 – and human rights defenders continue to be assassinated. What might their fate be if Duque, someone who never supported the peace deal, wins the presidential election?

Furthermore, Duque, unlike Petro, has not even whispered the words 'land reform' as part of his government plan to help solve one of Colombia's most pressing problems.

Whereas Petro publicly stated that, if elected president, he will embark on a program of "democratization of land in Colombia," which will "allow us definitive peace," Duque has played his part in trying to can the FARC peace deal and vowed to end peace talks with the ELN if a ceasefire is agreed.

If history is to double as a crystal ball, Colombian President Ivan Duque is a formula that spells more conflict and bloodshed.