Due to the illegal sanctions imposed on the country by the United States (U.S.) and its allies, the import of food, seeds, fertilizers, machinery, and other basic necessities has been restricted in Venezuela. As a result, food production registered a 60 percent decrease at the national level, but small and medium-scale farmers in Venezuela are ‘betting’ on growing food with the least use possible of commercial inputs, as a way to resist the economic blockade that has plagued the country since 2014. 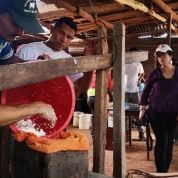 Young people and women are playing active leadership roles in the process. “It is our historical responsibility as the youth to defend the [Bolivarian] revolution and continue with the task of building socialism as the popular forces of Venezuela. And we are doing it here by combining food production with political-ideological education”, says Elisa Peña, a young woman involved with the El Maizal commune, in Lara and Portuguesa states in Western Venezuela.

Inducing food shortages to increase hunger in sanctioned countries has been one of the U.S.’s favorite strategies to instigate popular revolts and force the ousting of the leadership from governments.

In Venezuela, however, this does not seem to have produced the intended effect. The widespread patriotism that is perceived in the Venezuelan people is driving measures and actions aimed at defending national sovereignty at the same time as building food sovereignty.

According to Kevin Rangel, the national coordinator of the FNCEZ, “the strongest attack on Venezuela’s national sovereignty was the economic element and more specifically the food element”. “The [National Productive] alliance is, therefore, an instrument to empower small and medium-scale producers,  conuqueros [peasant farmers], the communes and the landless peasants and urge them to take the task of producing and feeding the nation as a priority”, he added.

In the states of Lara, Portuguesa, Barinas, and Apure various farmers associations, cooperatives and communes are putting forward production alliances that scale up to include processing and distribution in their communities and beyond.  These states are located in the western part of the country and concentrate on about 70 percent of the whole peasantry and food producers in Venezuela.

Most of the farmlands now in the possession of cooperatives and communes in the region were handed over to the peasantry after being expropriated from landed oligarchies which concentrated the bulk of the productive lands in Venezuela.

In an “all-out war against the latifundio”, the land was ‘recovered’ as a measure to resolve the then prevailing deep inequalities in land ownership and access.  The process of land recovery was headed by the then president of Venezuela, Hugo Chavez with the support of the army. According to Venezuelan vice-minister of International Communications, Willian Castillo, “the rural sector and the peasantry has been the most affected social group by the violence deployed by the paramilitaries brought in from Colombia and other countries, in revenge for the policies of land recovery and nationalization”.  Those are, he added, “the monsters of the latifundia that still operate in our country, some of them still anchored in the State”.

Historically, Venezuela’s economy has depended excessively on the oil sector. One of the objectives of the Bolivarian revolution, with the arrival of Hugo Chavez in power, was to diversify the economy, for instance through boosting agricultural production across Venezuela.

A significant number of people once settled in urban centers returned to the countryside to embrace farming activities in response to the government's call for rural revitalization. However, agricultural production in Venezuela has largely been controlled by agribusiness and depended on imported industrial inputs.

The ongoing economic attack on Venezuela, which for instance resulted in a ‘blockade’ on the import of seeds, is nevertheless triggering a paradigm shift among small and medium-scale farmers, especially those working under the umbrella of Frente Nacional Campesino Ezequiel Zamora, to move away from agricultural systems dependent on external inputs.

“The economic blockade and the attack on Venezuela, as terrible as it is, is allowing us to find innovative ways to produce our food and secure our local food sovereignty, without depending on external industrial seeds and fertilizers”, says Braulio Marquez, a spokesperson at Ali Primera productive commune, in Apure. The commune chose the name in honor of Ali Primera, the world-famous late Venezuelan musician, composer, poet, and political activist whose songs condemned exploitation and repression while celebrating people's resistance.  His most well-known song was “Techos de Carton” (cardboard shacks), about the hard life faced by slum dwellers.

According to Amparo Leal, a woman leader and spokesperson of La Gran Union Simon y Bolivar Commune, “farmers are determined to produce. The situation is difficult, but we have to confront the boycott, the blockade and the sabotage by intensifying production, diversify crops and supply the communes and the country”. Amparo is also part of the self-government (auto-gobierno) of de Ciudad Comunal Productiva Simon Bolivar in Apure.

The Communes and the Production Units

The productive communes (comunas productivas) are envisioned to be independent administrative and political spaces towards the building of self-governments in the territories.  Communal cities and the communes, in general, seek to transcend the bureaucratic forms of territorial management and political organization of a “bourgeois state.”

“We are putting forward a model, inspired by Chavez, to introduce a new geometry of power. From below in the territories  we are generating an organizational process in which the decision-making process is held horizontally”, explains Jose Luis Sifontes, member of the political committee of the Comuna ‘El Maizal’.

The idea of communal organization, as an alternative to the political organization of the bourgeois state, goes back several decades in Venezuela. With the process of the Bolivarian revolution, however, this process has been pushed even further. The goal was to construct a new social fabric that would allow the people to truly exercise their power.

As Willian Castillo explains,  communal democracy -  this is, the power exercised by the people with widely decentralized mechanisms of management,  production, distribution, and consumption without the interference of the State - was the condition for building of socialism, as Hugo Chavez would define it.  The first laws on communal power were enacted in the mid-2000s in Venezuela.

The Gran Unipn Simon Bolivar Communal City in Apure, a collective of eight communes, was the first to elect self-government, in 2008, after a long organizational process driven by the Frente Nacional Campesino Ezequiel Zamora that started in the 90. It consists of 116,000 hectares, 39 communal councils and 7600 inhabitants.  This Communal city collectively produces a great diversity of crops among cereals, legumes, oilseeds, meat, milk and fruits.

In the case of Comuna Maizal, farmers are currently producing  60 tons of corn per month, “a production that allows us to supply the demand we have in the territory and that leaves us with a surplus. It allows us to take production to other regions”, says José Luis Sifontes.

The FNCEZ is a member of the international peasant movement, La Via Campesina. FCEZ was born with the intention to contribute to the Bolivarian revolutionary process and to contribute in a concrete way to the process of transforming the agrarian model and revolutionize the countryside.

Boaventura Monjane is a Mozambican journalist and Ph.D. candidate at the Centre for Social Studies, University of Coimbra. He was part of the first international solidarity of La Via Campesina with Venezuela that took place in January 2020.
The views and opinions expressed in this article are those of the author and do not necessarily reflect the official position of La Via Campesina.