Henri Falcon, Venezuela's former governor of Lara state and father of four, is considered to be the main opposition candidate running for the presidency against incumbent President Nicolas Maduro, the candidate of a coalition of left-wing parties, in the upcoming May 20 elections. 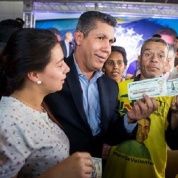 Falcon, unlike much of the Venezuelan opposition and its main figures, comes from humble upbringings being the son of a school teacher and small-time farmer father.

He is arguably one of Lara state’s most famous politicians, winning the governorship twice, once under the banner of the ruling socialist party and once again as an opposition candidate.

The 56-year-old lawyer was a non-commissioned military officer in the early 1990s when he met late Venezuelan President Hugo Chavez shortly before his failed coup attempt in 1992, and making the presidential hopeful one of Chavez's early allies.

Together they founded the MBR-200 movement in 1994 and three years later the Fifth Republic Movement (MVR) that won the presidential elections in 1998.

In 1999, Falcon was elected as a representative for Lara State in the National Constituent Assembly, which drafted Venezuela's constitution. When the movement was dissolved in 2007, Falcon became a member of the now-ruling United Socialist Party (PSUV). he also served as the state's governor between 200 and 2008, scoring victory under the PSUV's banner.

Investigated on corruption charges in 2009, he resigned from the PSUV a year later, joined the Homeland for All (PPT) party and founded his own Advanced Progressive Party in 2012.

That's the party he is representing in the upcoming presidential elections, in alliance with the Movement Towards Socialism (MAS), the right-wing Venezuelan Ecological Movement (MOVEV) and the Christian Democrats (COPEI), although a small group of them are now backing the evangelical candidate, Javier Bertucci.

Falcon, often referred to as a 'Chavista light,' was reelected governor of Lara State as part of the opposition anti-Chavista Democratic Unity Roundtable (MUD) in 2012, while the Advanced Progressive Party officially supported the candidacy of opposition leader Henrique Capriles against Hugo Chavez in the 2012 elections

He was voted out of office during the 2017 regional elections, losing to PSUV candidate Carmen Melendez.

After years of mistrust between him and the MUD over his past with Chavez and the socialist party as well as subtly criticizing opposition violent tactics during anti-government protests, his clear split from the coalition was fully realized when he registered as a candidate for the 2018 elections.

Falcon caused controversy among the fractured opposition simply by running for office. Several extreme opposition groups are boycotting the elections, claiming they are 'illegitimate' despite the presence of international observers and the provision of guarantees, which were agreed on as part of the latest rounds of talks between the government and the opposition in February.

The agreement was signed and implemented by Maduro's government but the MUD refused to sign the final deal under pressure from Washington.

RELATED:
Who is Nicolas Maduro?

Falcon maintains that the MUD's position is counterproductive, and that they should support the vote instead of boycotting the elections. "If we really unite, get organized, construct a single narrative, and instead of discouraging people by asking them to abstain, we call them to vote, there's no way this government can beat us," Falcon said.

One of his main challenges this election is the fact that he is viewed with suspicion within the opposition and its supporters due to his origins within the governing Chavismo movement. Some opposition leaders fear his candidacy alienates him from the opposition's upper- and middle-class members, as well as their anti-Chavista base which already considers him a traitor for conceding defeat in his last run for Lara State governor.

However, Falcon has repeatedly criticized Maduro's government, saying they "have broken the basic principle of a free economy, and the exchange controls must be lifted."

While he seeks to present himself as the candidate for the poor and the working class and as a better “progressive” alternative for the country than its leftist government and president, his proposals are anything but that.

Falcon wants to dollarize the economy as a way of combating the economic crisis, a move critics say would further subordinate Venezuela to the United States, let alone the fact that it would cause major crisis for the Venezuela people in a similar fashion to what happened in Ecuador back in 1999 when the country switched to the dollar, seeing hundreds of thousands of people losing their savings.

His program also supports the return of expropriated corporations and land back to the business sector, which would reverse some of the most progressive policies the country have seen in terms of wealth distribution and land ownership.

The opposition candidate has also proposed privatizing certain public services, and said he would "seek foreign help" to lift Venezuela out of the crisis, suggesting billions of dollars in loans from the IMF and the World Bank which would surely come with harsh austerity measures and cuts to social programs that would in turn directly harm poor and working-class people.