Socialism is not usually associated with the United States but the 2020 primaries have placed it at the center of the discussion. The country, known for its free market and savage capitalism, now debates free universal health care, education and wealth taxes, but is it just a pipe dream of a minority or are voters truly leaning more to the left? 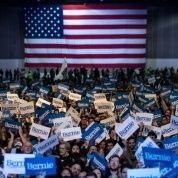 RELATED:
Super Tuesday: 'At Stake Is the Soul of the Democratic Party'

A Feb. 11 Gallup poll found that 76 percent of Democratic voters would vote for a socialist but only 17 percent of Republicans say they would. While overall, around 45 percent of U.S. nationals would choose a socialist as a president.

It’s for this reason important to make a note that when the U.S. media or politicians refer to socialism, they aren’t really talking about policies that would give origin to social ownership of the means of production and workers' self-management of enterprises, but to proposals resembling a social democracy within a capitalistic system.

The issue has risen partly due to the rise of self-described “democratic socialist” Senator Bernie Sanders, who in the Democratic presidential primary race has presented a more left-leaning agenda than his moderate establishment rivals. Also, the rising popularity of legislators such as Alexandra Ocasio-Cortez or Ilhan Omar are part of this growing trend.

So the recent surge in support of ‘socialism’ no doubt reflects a change in U.S attitudes towards capitalism.

The suggestion of once-fringe policies such as a Green New Deal, wealth taxes, a human rights approach to migration with a moratorium on deportations, free college tuition and a universal health care program become ever so appealing to a country with the highest healthcare costs per capita across the Organisation for Economic Co-operation and Development’s (OECD, where 70 percent of college students graduate with debt of over $30,000, and where the 400 wealthiest people by 2019 pay a lower income tax than the average middle-class worker.

According to results from the NBC News Exit Poll, in four states more Democratic primary voters on Super Tuesday said they had a favorable view of socialism than an unfavorable view.

Socialism was viewed favorably by a wide margin by Democratic voters in both California (53 percent) and Texas (57 percent) and favored by slimmer margins among Democrats in North Carolina and Tennessee.

Despite the fact that moderate and establishment candidate Joe Biden had a big night last night, winning nine of the 14 states, the support for Sanders’ proposals are still there, thus support for the ‘socialism’ advocated in the U.S.

During his speech in Los Angeles last night, the former vice president used Sanders’ talking points but presented them in a lite version for those voters that know something is not working but are still affected by "red scare" propaganda.

“Look, our agenda is bold. It’s progressive. It’s a vision, where health care is affordable... standing up to beating the NRA and the gun manufacturers, and leading the world to take on the existential and that of climate change,” Biden promised in his speech.

This change in strategy was successful as the poll results proved, as they are based on the early support Sanders got from the first four states mentioning those same exact issues. So if Super Tuesday showed if only one thing is that people are in dire need of a change to the status quo but how candidates present it continues to be quintessential.