Charities have mobilized around the Nepal earthquake, with hundreds of them tweeting and putting out calls for donations. Yet they did not respond in the same way to the 800 refugees who drowned April 19, or to the large scale leveling of Gaza last year, nor for the families of black people killed by police in the U.S., for Aboriginal communities being shut down by the Australian government, for the thousands of forcibly disappeared in Mexico, or the victims of opposition violence in Venezuela. 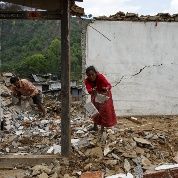 Natural disasters, for their apparent lack of politics, attract more first world sympathy than man-made (transnational made, government made, first-world made) tragedies and injustices. The value of human life continues to vary according to racist priorities, the interests of big business and geopolitics. An earthquake is a tragedy, but the tens of thousands of children who die yearly from easily preventable illnesses such as diarrhea is not. A tsunami is a tragedy, but the objectification of women and the dehumanization of the third world, is not. When the first world can condescendingly donate quick help, buying away its guilt in minuscule amounts compared to third world debt and the pillaging of third world resources, it mobilizes. But when long term, thought-out, political and economic change is needed, when the powers that be could be disrupted and should be dislodged, the mainstream media and charities remain conspiratorially silent, condemning some lives to be worth less, worth nothing.

The Israeli army announced that it has sent aid planes, 260 soldiers and equipment for a field hospital to Nepal. Apart from the fact that Nepal needs doctors, psychologists, and construction experts who speak Nepalese, rather than soldiers, the hypocrisy of pretending to lend a hand in the stricken country, while actively destroying the homes, hospitals, and schools of Gazans last year, is appalling. Further, a Time reporter in Tel Aviv reported that Israel had evacuated 15 Israeli babies from Nepal to Israel. The babies were born in the last six weeks to surrogate mothers in Nepal, but the Israeli Boeing 747 left the mothers behind.

Further, history shows that charities and first world pledged aid rarely makes it to those it has been promised to. In January 2010, Haiti suffered a similar sized earthquake to Nepal (7.3 magnitude), and over 200,000 people were killed and 1.5 million displaced. Even before the earthquake, Haiti was the poorest country in the Americas, which no doubt contributed to the large death toll and then made recovery and coping with the situation extremely difficult. Aid was promised, but European and U.S. responsibility for the poverty, through unfair trade agreements and centuries of imperialist colonization, exploitation, and invasion, was not acknowledged when that “help” was given. Then, the billions of dollars in aid that were promised, paraded with subtle glee in front of the media, didn't arrive. According to AP, only 1 cent of every dollar spent by the United States on Haiti earthquake relief actually went to the Haitian government. Forty percent went to the U.S. military, and 36 cents to USAID. According to a 2013 Guardian report, over 90 percent of all humanitarian funding for the Haiti earthquake relief went to donor's own civil and military institutions, the U.N., international nongovernmental organizations and private contractors.

Likewise, just over 5 percent of money pledged, mostly by countries in aid, to rebuild Gaza after last year's devastating 50-day war, has been delivered, according to the U.N. information service, IRIN. Over 2,000 people were killed, and around 100,000 homes destroyed, and almost one year later many families are still sleeping in temporary shelters.

Charities calling for donations for Nepal include the likes of Save the Children and World Vision; two charities that propagate racist, decontextualized and homogeneous stereotypes of the diverse continent of Africa: thin pleading African children that are so helpless and cute, they need the ungenerous donations of the first world. Such “poverty porn” generates charity, not activists, and utterly simplifies and misrepresents the situation. Charities are doing something similar to Nepal: they are not talking about why the earthquake left so many dead there, when in other countries like Japan, earthquakes of that size have left no deaths. They are not helping anyone to understand the country, its people, or the situation. Their charity empowers the wealthy and disempowers and victimizes those who suffer. It disregards the intelligence of people in Nepal, and their familiarity with their own problems and their ability to solve them.

By the way, while Save the Children calls for people to “sponsor a child” in Nepal — a very individualistic approach to a broader crisis — its head is earning 234,000 pounds sterling ($US360,000) a year, according to the Daily Mail.

Meanwhile, on Tuesday, officials were reporting a bottleneck of arrivals at Nepal's only airport, making it difficult for humanitarian supplies to arrive and be distributed. With charities and aid organizations arriving from all over the place, many with unqualified, well-meaning staff, it has become an uncoordinated free-for-all, with each charity doing what they want and what they deem important, without meaningful coordination and input from those affected.

So what is the alternative, especially for many of the big-hearted people who donate to charities under the impression it is the only, or most useful thing they can do to help out? According to Truth Out, the U.S. house of representatives gave 25 of the country's billionaires a US$334 billion tax break on April 16 when it voted to repeal the estate tax. That sort of money should instead go towards basic social needs, looking after refugees and hospitals for example, and to national and international emergency crews and state-civilian networks with the training and resources to both respond to emergencies in an organized, respectful way, and even more importantly, to prevent them by raising awareness about how to respond to an earthquake or fire, etc, reinforcing building structures to cope with earthquakes, setting up more hospitals to quickly treat injured people, and having plans in place.