4 January 2018 - 09:30 PM
Analysis
Tokyo Warns of War, US Wary as Seoul Asserts Itself and Pursues Peace Talks with North
0

Citing North Korean nukes and claiming Japan faces its "greatest danger since World War II," Shinzo Abe's right-wing government is rearming as South Korea demands redress for WWII sex slaves or "comfort women." Most worrying for Washington and Tokyo, however, are the signs of a breakthrough in diplomacy between Seoul and Pyongyang. 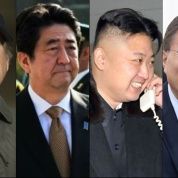 As South and North Korea begin a cautious, deliberate and "sincere" process of peace talks in the hope of defusing regional tensions in a neighborly manner, right-wing Japanese Prime Minister Shinzo Abe has suddenly sounded alarm bells over the "unacceptable" moves by Pyongyang, playing up its nuclear program and weapons development as a reason to bolster Japanese military might in a move he claims would protect the Japanese people.

The message comes at the start of a potential breakdown in relations between Japan and South Korea, both of whose present governments were formed under the close supervision of post-World War II U.S. occupation authorities and who have since played crucial roles as lynchpins in the United States' Asia-Pacific security architecture. Japan, like its ally Washington, has looked askance toward the Korean Peninsula as Seoul has demanded redress for Tokyo's historic crimes while warmly greeting Pyongyang's icebreaking gestures toward rapprochement.

North and South Korea announced Friday that they will hold official peace talks on Jan. 9 after Pyongyang sent a statement accepting Seoul's offer for dialogue next week.  The person-to-person talks will be held at the Peace House, located on the South Korean side of the village of Panmunjom located in the Demilitarized Zone (DMZ) between the two nations, according to South Korea's reunification ministry.

Despite the moves toward ending the longest war on the continent, Japan still claims that it faces the possibility of regional conflict, potentially the worst since World War II when Axis Japan was a principal aggressor against nations such as Korea and China.

"It is not an exaggeration to say that the security environment surrounding Japan is at its severest since World War Two," Prime Minister Abe told a New Year news conference. "I will protect the people's lives and peaceful living in any situation."

Moon came to power in May promising improved inter-Korean relations and an assertive government that puts Korean interests over foreign ones after the removal of his disgraced predecessor, Park Geun-hye.

Moon has criticized Park's right-wing conservative government for striking a deal with Japan over a 2015 settlement on the issue of sexual slavery by Imperial Japanese forces. He called it a "political agreement that excludes victims and the public" and violates general principles in international society concerning resolution of historical grievances. Under the 2015 deal, Japan apologized to victims and provided 1 billion yen (US$8.8 million) to a fund to help the former sex-slaves in exchange for South Korea providing no support for an overseas statue-raising campaign by advocates of the "comfort women" and agreeing to refrain from calling the women "sex slaves" on the world stage.

While the United States stood firmly behind the deal – and, some argue, pushed for Seoul to accept it – the UN Committee Against Torture has recommended its revision, citing a failure "to provide redress and reparation, including compensation and the means for as full rehabilitation as possible as well as the right to truth and assurances of non-repetition." The 32 surviving women want Japan to take legal, binding responsibility for its actions, and some have even told Moon that the 2015 pay-out should be returned to Japan.

Japan, however, has said that the agreement resulted from "legitimate negotiations" and any revisal of the deal would render bilateral relations between Seoul and Tokyo "unmanageable."

Moon's public complaints about the deal has raised consternation in Japan, where media reported that Prime Minister Shinzo Abe may decide not to visit South Korea for the Winter Olympics there next month. The rancor is the latest product of the bitter history between the two countries, including Japanese colonization of the Korean peninsula.

Abe, along with a large percentage of lawmakers sitting in the Japanese Diet or parliament, adheres to the belligerent ideology of Nippon Kaigi, or Japan Conference, an ultra-nationalist society founded in 1997 that seeks a return to Japan's pre-WWII “beautiful traditional national character.” Known for extolling and attempting to rehabilitate the bloody policies of the Empire of Japan, the group represents the most aggressive layers of Japanese elites and counts in its ranks prominent businessmen, bureaucrats, academics and ultra-right lawmakers.

For Nippon Kaigi, Japan has had its "legs and hands bound" by the US-drafted 1947 "pacifist" Constitution that restricts the country's international role to what it calls "humiliating apology diplomacy" enshrining the country's wartime atrocities as well as the humiliation of abject defeat and unconditional surrender that Imperial Japanese policies culminated in.

According to a 2014 report by the US Congress, Nippon Kaigi believes "Japan should be applauded for liberating much of East Asia from Western colonial powers, that the 1946-1948 Tokyo War Crimes tribunals were illegitimate, and that the killings by Imperial Japanese troops during the 1937 'Nanjing massacre' were exaggerated or fabricated."

Nippon Kaigi also enjoys close ties to the anti-immigrant Zaitokukai, a hard-right extremist group that has held anti-Korean, xenophobic marches advocating violent attacks on and killings of Tokyo's Korean community, many of whom are sympathetic to North Korea.

For years, Seoul and Tokyo have been at loggerheads over the matter of comfort women — the thousands of girls and women, many of them Korean, who were forced to work in Japan's military brothels during World War II. The two countries reached an agreement in 2015, in which Tokyo shelled out US$8.8 million to a fund for victims, but Moon on Thursday criticized that deal, saying it "cannot solve the comfort women issue."

His comments came after a South Korean panel concluded that the 2015 treaty failed to meet victims' demands for compensation. In response to the panel's findings, Japanese Foreign Minister Taro Kono warned that any attempt to revise the agreement "would make Japan's ties with South Korea unmanageable."

The matter is a topic of national importance in South Korea, where protesters last week called on the government to nullify the deal. The move is considered crucial to Moon's populist base.

"We will see a fracture develop in terms of US-South Korea-Japanese cooperation in dealing with the North," Stephen Nagy, a senior associate professor at Tokyo's International Christian University, told CNBC. "Pressing Tokyo on the comfort women issue while attempting to engage Pyongyang has the risks of alienating Tokyo from Seoul."

Meanwhile, regional tensions rose in 2017 as the Democratic People's Republic of Korea, the North's official title, conducted its sixth and largest nuclear test in September. In November, it then said it had successfully tested a new intercontinental ballistic missile that could reach all of the US mainland. The country held a record number of missile tests throughout 2017.

While Kim Jong Un noted that he had a "nuclear button" on his desk during his New Year's Day address, he also declared that the DPRK had achieved the "historic accomplishment" of nuclear power and was prepared to move onto economic development. He pointedly said that "Pyongyang would not use nuclear weapons against any nation unless its sovereignty is encroached upon by any hostile force with nuclear weapons," an important message that went almost entirely unnoticed by Japanese media.

For Abe and his right-wing Liberal Democratic Party, the alleged "threat" posed by the DPRK's deterrence arsenal and an increasingly powerful China has provided a covenient excuse to advance the Japanese right's long-held ambition of revising Article 9 of the US-drafted 1947 Constitution, which renounced the use of war or threats of force to settle international disputes and outlawed the maintenance of the country's land, sea and air forces.

The document was an attempt by occupying Allied forces to prevent the country from directing its still-formidable industrial base toward reassembling the war machine that waged aggressive campaigns across Asia in an alliance with Nazi Germany and Fascist Italy. The campaign claimed well over 10 million civilian lives as the Imperial Japanese Army and Navy committed war crimes, including genocide, in pursuit of expansionist attempts to conquer the region.

But Japanese governments, encouraged by Washington, have interpreted the Constitution to allow a military exclusively for "self-defense." Japan's well-funded military currently retains over 227,000 personnel and enjoys an arsenal stocked with various high-tech weapons.

"I would like this to be a year in which public debate over a constitutional revision will be deepened further," Abe said in his address. However, the public remains divided over changes to the charter.

In a year-end analysis by Asahi Shimbun, the Japanese daily noted that Prime Minister Abe's government is exploring the possibility of converting the Maritime Self-Defense Force helicopter carrier Izumo into a full-blown aircraft carrier capable of having F-35B fighters operate from its flat-top deck.

Despite Japan's claims for a need to boost militarization of the region, regional powers such as China are hoping renewed ties between North and South Korea following Pyongyang's overtures will bear fruit and calm tensions in East Asia.

The "peace offensive" has not been warmly received in Tokyo or Washington, yet President Trump had no choice but to relent Thursday when South Korean President Moon requested that joint South Korea-US military exercises be placed on hold during the upcoming Pyeongchang Winter Olympics to ensure that the DPRK does not respond with another missile test. In essence Trump agreed, albeit temporarily, to what the Chinese and Russians had long urged Washington to accept: the so-called "double freeze" plan

In a press release, the White House noted that the agreement intended to "de-conflict the Olympics." Regardless, Washington remains suspicious of the sunshine dawning on Seoul-Pyongyang ties.

An editorial in China's state-owned Global Times noted: "The (hostile) relationship between the United States and North Korea is at a critical stage where it cannot continue in such a fashion. And South Korea can no longer endure the pain their relationship has caused. Seoul has never wanted a war on the peninsula and took it upon themselves to resume contact without asking for Washington's permission, but because of South Korea's allied bond with the United States and Japan, they view Seoul's recent action as an act of cowardice and deceit.

"It is interesting that as one of the important parties directly involved with the peninsula crisis, South Korea does not play a dominant role in shaping or influencing its course. Instead, South Korea is viewed as a strategic military force readily available in the event of a conflict on the peninsula or anywhere throughout the Northeast Asian region."