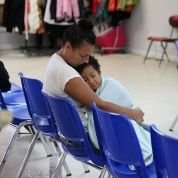 "What this means is that judges will have to complete about three cases per day," DOJ spokesman Devin O'Malley said. "We feel that is in line with what judges are already completing."

According to the Wall Street Journal, the Judicial Department will now require its ministers to complete an average of at least 700 cases per year. Already, fewer than 15 percent of appeals on court decisions are overturned and the National Association of Immigration Judges is warning these changes could threaten the foundation of due process for immigrant rights.

Currently, the average wait time for a case ruling can be anywhere from one year to five, depending on the court's location and the concentration of immigrants in that area. For example, studies show that in San Francisco only about 36 percent of cases result in deportation. In New York, the statistics slip to 24 percent. In Charlotte, New Hampshire and Atlanta, Georgia, this rate skyrockets to nearly 90 percent.

"What he wants is an immigration court system which is rapid and leads to lots of deportations," said Nancy Morawetz, who teaches the Immigrant Rights Clinic at New York University School of Law.

Secretary of the American Immigration Lawyers Association Jeremy McKinney told NPR: “Decisions in immigration court have life-or-death consequences and cannot be managed like an assembly line.

"These unprecedented numeric quotas are so onerous that many judges will rush through cases to protect their own jobs."

In an interview with NBC, a former of Arlington Immigration Court, Judge Paul Schmidt, said: "I think most people would be incredulous at what happens in immigration courts and what sometimes passes for due process."

Per the U.S. legal system, immigration cases are handled in civil court. Unlike criminal court, where defendants are provided an attorney if unable to afford one, this custom is not mandatory. Consequently, only about 37 percent of undocumented migrants have legal representation, while the other 63 percent are left to defend themselves.

Matt Adams, of the Northwest Immigration Rights Project, told Kiro 7: "There's children from two years old to 17 years old who are appearing by themselves, who are sitting there without a clue about what is happening."

Tens of thousands of immigrants turn to the United States seeking protection against violence only to be turned away at court after years of fighting to defend the legitimacy of their case.

RELATED:
Nearly 1800 Families Separated At US Border In Just 17 Months

Ofelia Torres, former legal assistant and community organizer at Detroit Hispanic Development Corporation, said: "Usually for (undocumented immigrants) who have been here for less than a few years, we have to tell them up front: 'You're not going to win your case. We can stretch out your case for as long as we can, but we need to make a back-up plan because when your last court date is up, they will give you the order to leave. It's unfortunate, but unfortunate is the way laws are right now. We have to abide by the laws.'"

Judge Marks told PBS: "What this quota is going to mean is that when I deny a continuance or I say that one more witness is duplicative and not necessary, the people before me are going to ask: 'Is Judge Marks making a decision based on her legal judgment, or is she concerned about trying to improve her own personal performance rating?' When those kinds of concerns are raised, then appeals abound and that is going to cripple our already-overburdened immigration court system."

As attorney general, Jeff Sessions has the power to refer cases to himself as head of the Executive Branch and has said he intends to assume any additional cases leftover from judges at the end of the year.

As a countermeasure to accelerate deportations, U.S. President Donald Trump is once again lobbying for the removal of the 'catch and release' policy observed in detention centers around the country.

First introduced under the administration of George W. Bush, the policy is the only thing standing between an immigrant's freedom and years of imprisonment in one of dozens of detention centers.

A temporary release is granted to undocumented immigrants while awaiting trial and the procedure has been practiced by Immigration and Customs Enforcement Agents (ICE).

However, in a push to accelerate deportations, Trump announced the signing of a memorandum demanding Congress compile a report charting the possibility of ending the 'catch and release' policy, repurposing military facilities and opening more detention centers.

"Upon entering some facilities, detainees were housed incorrectly based on their criminal history," the investigation by the Inspector General's Office of the Department of Homeland Security said. "Further, in violation of standards, all detainees entering one facility were strip searched... Staff did not always treat detainees respectfully and professionally, and some facilities may have misused segregation."

Long waiting lines for basic medical care, unhygienic bathrooms and spoiled, expired and moldy food in the kitchen were found in four different facilities. The federal document ended by recommending – not requiring – ICE address these issues.

National Immigrant Justice Center Executive Director Mary Meg McCarthy said: "ICE's inability to provide for the safety and health of the tens of thousands of immigrants in its custody has been documented for years. While the Inspector General's report provides documentation of extensive abuses, its remedy is incredibly insufficient: it directs ICE field office directors to review the areas of concern. We know from earlier directives that ICE's internal review processes fail to generate meaningful change."

It was for this very reason that the 'catch and release' policy was introduced. To substantiate it, the Supreme Court enacted a law in 2001 which instituted a deadline for court cases to be resolved within six of an immigrant's initial arrest and detention. In essence, the law prohibited lengthy detentions for want of strong justification.

A long-term detention prior to a migrant's deportation could only be justified if there was a clear sign of flight risk observed.

Activists have pointed out that eradicating this policy would sentence undocumented migrants to years in overcrowded, unhygienic prisons on the U.S.-Mexican border and throughout the United States.

However, diplomats continue to push for the privatization of detention centers, which would only lower the already inhumane living conditions in these facilities.

A Michigan native, Torres told teleSUR: "I've been to the jails here to visit the people who have been detained by immigration... I remember a few times when fathers of families said they couldn't take it inside, even though it wasn't a big state, federal system. They knew that place was not for them. It was difficult, because they're good people and they get thrown in with the real criminals."

Torres intends to travel with human rights organization CARA to investigate the living conditions at one such center in Dilley, Texas where nearby fracking has allegedly contaminated the water.

"They're detaining them and they're slowly killing them. We are calling them concentration camps, honestly," Torres said, explaining that dorm rooms are segregated and children are left with their mothers, depending on their age. "If the child is a teenager, sometimes they move them to different facilities, so you lose track. If the parents don't have the ability to speak the language, they get lost in the system."

According to an April announcement from ICE, nearly 1,500 "lost" migrant children have since resurfaced, prompting criticism from advocates over the lack of concern and overall negligence in immigration policies.

MSNBC's Chris Hayes tweeted: "Kids as young as nine years old, seven years old — cases of children as young as 18 months — ripped out of the arms of their mother and putting those children into government-run shelters for a very specific reason: to punish the immigrants."

"It's a place I would not wish any woman to be in at all," said Mexican immigrant Jacinta Morales, who suffered a miscarriage in a detainment center – one of over 500 pregnant women detained since December to complain to the Department of Homeland Security of poor healthcare and undue amounts of stress.

In an interview with NPR, Judge Marks said: “The solution is simple: it's two steps. We need more resources and we need them now. And we also need structural reform. Congress has recently taken a very important step to address the inadequacy of resources by – just in the last budget cycle – providing money for 100 more immigration judges. That's the first step.

"But the necessary second step is to take the immigration courts out of the Department of Justice, where they're currently placed. And the reason for that is the mission of an independent and neutral court is incompatible with the role of a law enforcement agency."