President Donald Trump’s order to “Build the Wall” on the U.S.-Mexico border has woken up many on the left to a reality that immigrants have faced since the late 1980’s. Whether his presidency represents a comprehensive break with previous administrations is up for debate, so in light of Trump's presidency, teleSUR spoke with three leading voices on immigrants’ rights who have dedicated their careers to working on the ground with those who have experienced the darkest side of immigration policy. 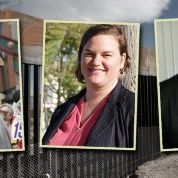 Nora Phillips, an immigration attorney with Urias & Phillips, LLC, who advises lawyers, the Los Angeles Public Defender and the Los Angeles Police Department on U Nonimmigrant Status (U Visa) and Deferred Action for Childhood Arrivals (DACA) and is the legal director of Al Otro Lado, which helps deportees, refugees and migrants in Tijuana

Dr. Alfonso Gonzales, associate professor in Ethnic Studies at the University of California Riverside, specializing in Latino politics and migration, and author of "Reform without Justice: Latino Migrant Politics and the Homeland Security State."

How the U.S. Already Built the Wall

“After 911, a lot of attention went to the border,” said Phillips, as resources flooded in to beef up border security.

Even before that, in the 1980’s, the security apparatus was already fortifying itself.

Private detention centers run by companies such as GEO Group and the Corrections Corporation of America made money from locking-up immigrants, which was “a complete disaster and complete breakdown of the moral fiber of the United States.” Bill Clinton’s Illegal Immigration Reform and Immigrant Responsibility Act of 1996 was the major trigger of a series of draconian bills on immigration that would, one by one, strip migrants and refugees of their rights.

RELATED:
Elections and Undocumented Immigrants in the United States

Phillips remembered a trip to Tijuana to work in a migrant legal clinic, where “it’s you and the cactus and a big pole of a million cameras,” accompanied by motion sensor detectors in the ground to detect foot traffic and facial recognition software.

That, she said, is what border security has come to.

“An entire generation has been brought under the shadow of the wall,” said Ramirez, referring both to physical fences already erected in multiple urban border communities and their militarization that started with Clinton. “That wall has become a symbol to the failed policies of Washington D.C, be it Republican or Democrat.”

Ramirez lives in San Diego, where he says that when he goes out for a job, he will likely be pulled over by border patrol.

“These are the kinds of things we are more concerned about” than the wall, he confessed.

“To say that Trump is responsible for the wall is ahistorical,” said Gonzales. “This is about the state’s buildup to control migration flows.”

Gonzales attributes the birth of current immigration policy to Ronald Reagan, beginning with his Migrant and Seasonal Agricultural Worker Protection Act of 1983 and the Immigration Reform and Control Act of 1986, commonly known as IRCA. Other acts, from the Real ID Act of 2005 to the Secure Fence Act of 2006 and the Secure Border Initiative, have proven that “migration control is not just about building the wall; it’s about building an infrastructure that can control migration flows more broadly.”

The infrastructure, as of Barack Obama’s administration, includes drones and military technology, not to mention a swollen border patrol force and the expansion of family detention centers.

The Wall Is Not on the U.S.-Mexico Border

The border begins on the northern frontier of Guatemala, said Phillips, and has seen a recent spike in crossings by Central Americans because of U.S. policy and intervention in their countries.

She would locate the border further south since U.S. dollars, through Plan Merida, have ensured that apprehensions occur even before the U.S.-Mexico border to prevent Central Americans from even reaching Mexico.

Technically, she points out, the border is 100 miles inland of either U.S. border and of the coast, which would mean that the majority of U.S. residents live in a border area accessible to border patrol agents.

RELATED:
Immigration Crackdown on Central Americans in US Begins with 1st Arrests

There’s also the “digital border” that represents the surveillance and policing of migrant communities.

“The border is kind of everywhere, and it has been for a while.”

To Ramirez, the “landscape of borderlands” is “not so much the building of the wall, but what happens to those communities” that live on the border.

That infrastructure is mostly concentrated on the U.S. side, severely degrading residents' quality of life, even with strategies to prevent excessive government intrusion like checkpoints.

“No matter where the exact location of the border may be, the impact is the same,” said Ramirez. “Some of our communities have been in place much longer than the international boundary between the U.S. and Mexico was established,” but the restriction of movement is a generation-old.

“The issue is that there is a migration control apparatus that’s way beyond any physical wall,” said Gonzales.

He agreed with Phillips that border patrol is taking advantage of its 100-mile jurisdiction from the coast and that Mexico is now patrolling three more borders: one in Chiapas with Guatemala, one in Veracruz with the Gulf Coast and Atlantic and one in Guadalajara and Mexico City, all employing smart policing technologies against Central American migrants.

There, they can be deported from Mexico before they even begin their trip further up north.

“I’m horrified and I’m dismayed and I’m really sad, but I’m not really that surprised,” admitted Phillips. “It’s terrible right now, but it likely will get extra-terrible.”

She preferred not to theorize too much about what Trump might do, both because “you can’t put an immigration policy out on Twitter” and because it frightens her to think about it.

While she’d say that immigration policy has “been dystopian for a while,” what Trump is insinuating he'll do – based on his strategists, his pick for immigration court and his statement on deporting two million undocumented migrants in his first 100 days – will result in nothing short of "terror in the streets.”

She says she's gotten used to being let down by successive administrations that promise immigration reform and fall short, but with Trump, “We’re not as a community getting really scared for no reason.”

Ramirez is also concerned about Trump, though he doesn't expect dramatic change.

“Clearly, there has been a consensus in policy when it comes to border enforcement,” said Ramirez. “The border wall has been built in much of the border region already, and there’s nothing new really of the policy set out by the president-elect.”

Upon a closer look at Trump’s pick for Department of Homeland Security chief – retired General John Kelly – Ramirez adds that he expects the rollback of minor gains under the Obama administration, such as the designation of schools, places of worship and hospitals as safe from border patrol agents.

The chauvinism of the National Border Patrol Council, which is fully behind Trump and is “not being coy about what they’re willing to do,” could signal a complete lack of accountability, oversight and transparency mechanisms, which could at least be demanded under Obama.

“They’re out there, they’re saying things like, ‘Now our handcuffs have been removed.’”

The U.S. Border Patrol, which represents the largest law enforcement agency, can already “waive entire sections of the U.S. Constitution under the guise of national security,” such as due process and the need for a warrant. This could become an even more common practice with a former U.S. Marine Corps general heading the department.

Trump, to Gonzales, “represents a definite authoritarian shift to the right on migration control,” who lacks “even the pretext of having a liberal democracy” and will likely swap civil liberties and human rights protections for a total police state.

“It’s not Obama versus Trump or Republican versus Democrat; it’s about the reconfiguration of the state over the last 30 years into a more oppressive and authoritarian entity that could prevail over social and political minorities more effectively,” said Gonzales.

“This is about the crisis of the nation-state and neoliberalism: one in which wealth is concentrated in the hands of very few people and in order for the few to govern the many, they have to turn to mobilizing the racist vote and dividing the working class.”

Trump won on a wave of antagonism against political activists and a resurgence of racism to the fore, and he is rewarding his voters by surrounding himself with “hard-core right-wing nativists and eugenicists” who draw inspiration from the “restrictionist” Center for Immigration Studies.

RELATED:
Trump Vows to Deport up to 3 Million Undocumented Migrants

Obama’s legacy was atrocious for immigrant rights activists, especially the ramping-up of deportations and the expansion of family detention centers, but at least there was some level of accountability.

His strategy managed to divide the immigrant rights movement, some settling with certain gains like the DACA and DAPA policies, but those activists are sure to unite against extreme moves that may come if he listens to the Center for Immigration Studies, such as rescinding juvenile visas and making it a felony to send a child over from Central America.

“Under the Obama administration, it was carrots and sticks,” he said, “but with Trump, there is no carrot. It’s just gonna be sticks.”