For Black History Month, Catherine Walsh, professor of Afro-Andean Studies at the University Simon Bolivar in Quito, Ecuador, shares with teleSUR her views about the achievements and challenges for the construction of an Afro-descendent consciousness in Latin America. 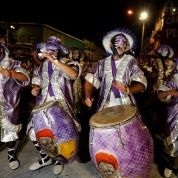 What in recent history would you say has contributed to the rise of a Black and Afro-descendent identity, with Black communities now embracing more than ever their culture across the continent?

Yes, this has changed radically. Several moments in recent history are important to highlight: in the 1990s, with the rise of Indigenous movements, alliances were built between Indigenous and Black people like in Ecuador.

But Black communities also began to organize by themselves, involving the construction of a notion of a Black territory, sometimes referred to as the “Gran Comarca” from the South of Panama to the North of Ecuador, where national identity does not matter. Black people living in the region often come from the same families, they have similar last names, and for many years have moved freely over the borders identifying as Afro-descendent and regardless of the national borders.

Then there was the meeting of Durban in South Africa in 2001: Black leaders came together from all across Latin America in order to begin to establish and consolidate ways to address identity, the identification as Afro-descendent and not just Black — not just a classification of color imposed by the colonial rule, not an identity that would be just racial or racialized, but an identity grounded on a culture. It connected with the diaspora in other countries, including in the United States. This shift also helped to address the particular colonial roots and ongoing coloniality that continues to classify and subjugate: the struggle was not just about identity, but also ancestral knowledge, how to include it in education, how to produce their own history.

Today, including amongst some Black intellectuals, both “Black” and “Afro-descendent” are used interchangeably, but often times “Black” in the last couple of years has taken on a new revived political significance because it necessarily marks racism and racialization.

However, in rural communities, Black people continue to identify as Black. The construction of Afro-descendency has been much more present among intellectuals and leaders associated with urban context than in rural areas, where identification remains even until now as “Black” rather than “Afro-descendent.”

How is this history of the construction of a consciousness different from the United States?

Rural and urban territory, for instance, has been an important past and present difference with the United States: while the urbanization of Black populations in Latin America is growing, yet many communities remain strongly tied to a more collective and communal kind of identity, connected to nature, to what Juan Garcia used to call "collective well being" — very different from the individualization that exists in cities where one becomes a Black individual but is not necessarily part of a communal base.

But it's not static: As Black populations become more urbanized, as urban spaces as for instance Brazil's favelas become the new territorial base that identifies Black communities, the notion of territory and identity change.

It's important to recognize the ways that Black history continues to be constructed, the ways that in Latin America official history has always negated in every single country Blackness and the ways Black intellectuals and communities have begun to re-write the official history, rethink memory on their own terms: that's part of a Black consciousness in the continent that continues to grow — in countries where the Black population is small like Argentina, Paraguay and Chile, but also in Brazil where its major or Colombia, continues to grow strong. The remembering —i.e. bringing together this history that has been dismembered— is extremely important today in maintaining and reconstructing identities and thinking about the ways education, a more inclusive idea of a nation.

Which current challenges face the movement of an Afro-descendent identity in Latin America?

Today the struggle continues despite the acknowledgment of Black communities within the nation, sometimes even in the Constitution like in Ecuador, against attempts to silence or deny the existence Black populations.

For example, the media often overlook the fact that violence from paramilitary groups or drug-trafficking cartels on the Ecuadorean and Colombian border affect primarily Afro-descendent communities, but portray this as an issue of national security rather than an issue of existence and life for Black populations. This is another way to make invisible populations that have been there since the founding of the so-called Republics in Latin America.

Same could be said about extractivism, particularly mining or projects of mega-tourism all the way from Costa Rica, Guatemala, Honduras, Nicaragua, to the Pacific Coast here. They are causing massive displacements of Black communities. Buenaventura in Colombia is being converted into a major port-city with major mega-tourism projects financed by the North, along with extractivism.

This negates how these communities are affected, while the “despojo” (meaning dispossession, displacement, de-territorialization) is not present in the state and media discourse, perpetuating the invisibilization of Black communities.

How has the history of colonialism shaped a different construction of Black identity across the Latin American continent?

French colonialism, Dutch colonialism, English colonialism is not the same as Spanish and Portuguese colonialism. One one hand, because Spanish and Portuguese colonialism came first, so if we go back to more than 500 years ago, the colonization – or what I would rather call the invasion – of continental Latin America marked an important element for both Black and Indigenous identity. The fact that Blacks were brought with the original invaders, sometimes as slaves, sometimes as supposedly free but under the yoke of the crown allied with the Spanish church to enact a kind of conquering that initially worked to decimate in some countries Indigenous populations but in others to create Indigenous-Black alliances.

So that history is very different from the history of the Caribbeans, where European colonialism came later, and in smaller spaces —islands, and created what is sometimes referred to as “creolization” – different from “mestizaje:” a racial mixing, because here in Spanish Latin America or in a different case in Brazil with Portuguese colonialism, particularly Spanish colonialism took it as an endeavor to create through the alliance of the cross and the crown, colonialism came along with Christianisation. So the Spanish, through Jesuits and other orders of the Catholic Church are who maintained slavery here. Jesuits are very well known for the slave plantations that they maintained.

In the Caribbeans, the alignment with the Catholic Church wasn't there and it was more an interest of the British crown per se.

For instance, even in a country as small as Ecuador, there is not one single way to understand Black history and consciousness: in the coast (the province of Esmeraldas) it was primarily Alonso de Illescas that came on a Spanish boat that stopped in Panama and was continuing on until Peru, and accidentally collided here, and he and other enslaved men escaped. So the history of maroonage on the coast is extremely strong, today Black consciousness on the coast in large part comes from this history of maroonage, of being free, of escaping but also creating spaces of existence and life outside the frame of both colonialism and later against the state. In Palenque, Colombia, the construction of "commarcas" and territorial spaces for existence and life were extremely strong, where seeds of knowledge were planted and have grown, as Juan Garcia says, and subsequent generations have cultivated these seeds to construct a strong Black consciousness based on freedom.

That's very different from the Valle del Chota, were slavery continued unofficially until 1964 and agrarian reform, even after the abolition laws were passed in Ecuador.

On the coast there was also strong alliances between the Black and Indigenous populations that created a different kind of mixing — sometimes in a stereotypical or racist way called “sambaje” (Black-Indigenous) the imposed term when people have been historically classified by their race.

So that colonial yoke has continued in certain ways, in the Andes for example (Ecuador, Peru, Bolivia) to construct this notion that the Black has been marginal. In Ecuador there has been no official document that mentions the existence of the Black population until the 1998 Constitution as if Blacks don't exist.

In other countries like Honduras, Belize, Guatemala, the Garifuna population is both Black and Indigenous and they identify as both.

In Brazil and Colombia the histories are very different, Brazil being the country with the largest Black population outside of Nigeria and Colombia the second country in Latam with the biggest Black population, because Cartagena was the base from which slaves landed and were distributed to other places, where many of the armies that fought for independence with Simon Bolivar, both in Venezuela and Gran Colombia were Black and were offered freedom, although never actually given – an empty offer by Bolivar.

The construction of a so-called “racial democracy” in Colombia, Venezuela and Brazil, where Blackness was taking into account, is different from the construction of the idea of a mestizo nation which Simon Bolivar perpetuated like in Ecuador, Peru, Bolivia and Central America, where Blackness was never taking into account but only “Indigenous-mestizo,” “Indigenous-Spanish”.

Some countries have recognized their Black populations, other have not, but the construction of a Black, Latin American identity has been more difficult to build because of national histories and the denial of these populations.