25 August 2015 - 07:30 AM
Analysis
The Infiltration of Colombian Paramilitaries into Venezuela
0

For at least 11 years, Venezuela has denounced the presence of extreme right-wing paramilitaries in its territory. These groups, coming from Colombia, have well defined political and economic objectives. Contraband, kidnapping, prostitution, drug, people, and arms trafficking, petroleum smuggling, are among the activities that these illegal groups carry out in order to sustain themselves. 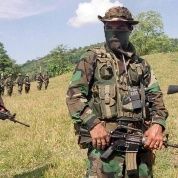 “The border is languishing,” said Venezuelan president Nicolas Maduro in a press conference with international media at the Miraflores presidential palace, barely a week after his government closed the land border with Colombia and declared a state of exception in various municipalities of Tachira state.

The reason? An attack from behind by a paramilitary group against three soldiers from the armed forces on Aug. 19, which left them seriously injured in intensive care. But this recent attack is just the tip of the iceberg of a much deeper problem: the presence of far-right paramilitary groups in Venezuela, brought from Colomiba with political and economic goals.

In May 2004, the leader of Venezuela’s socialist revolution, Hugo Chavez, revealed a paramilitary army had been discovered in Miranda state whose aim was to assassinate him. A total of 116 men were found, all Colombian, but dressed in Venezuelan military uniforms and armed. They were there to carry out an assassination plan dreamed up between Caracas, Bogota, and Miami.

Daktari farm, where the insurgents were training and hiding, was property of the Cuban Robert Alonso, brother of Cuban-Venezuelan actress Maria Conchita Alonso, a recognized reactionary who, 11 years later would return to the headlines again for her relationship with these armed and illegal groups.

At that time, Chavez deported those paramilitaries and handed them over to then president of Colombia, Alvaro Uribe, so that they could go to trial.

Today, Caracas continues to denounce the presence of Colombian paramilitaries in its territory, only now it is not only for political reasons, but also as part of the economic war that the country has been dealing with for many years, which has gotten worse since the passing of Chavez.

Kidnapping; prostitution; the trafficking of drugs, people, oil and arms; are just some of the things President Maduro said were obliging him to close the border with Colombia in Tachira state – at first for a week, and now indefinitely – until peace is restored and there is a harmonious relationship between the two countries.

In the 1930s most of the Colombian population lived in rural areas, with poor peasants struggling to survive, including defending their lands from landlords.

By 1946, campesinos had organized into armed, self-defense groups, aligned to one of Colombia's two main parties – the Liberals or the Conservatives.

The armed groups aligned to the Conservatives acted as paramilitary groups during the presidency of Mariano Ospina Perez (1946-1949). Ospira Perez vowed to defend extreme-right groups, while at the same time trying to reach out to the Liberal leadership to incorporate it into his government.

But the breaking point was the assassination of Liberal presidential candidate Jorge Eliecer Gaitan in 1948, an event that lead to widespread social unrest, including armed confrontations between political parties. The subsequent protests and upheaval led to a military take-over through the dictatorship of Gen. Gustavo Rojas Pinilla (1953-1957).

After a decadesof violence, the two opposing parties agreed in 1957 to alternate in government. As a result, the Liberal party called upon its supporters to lay down their weapons. But problems for campesinos were far from resolved, and the Communist party decided to step in and help them.

As the Conservative and Liberal alliance consolidated, landlords backed by local politicians used policemen – dressed in civilian clothes – to terrorize the campesinos and drive them out of their lands. This first version of paramilitary groups were known as “chulavitas.”

Meanwhile, during the days of the dictator Fulgencio Batista (1952-1959) in Cuba a paramilitary group emerged, led by Rolando Masferrer, a senator at the time. The Masferrer Tigers death squad terrorized the Cuban population into submission throughout 1957 and 1958.

According to the Cuban government, the paramilitary group is believed to be responsible for the deaths of over 2,000 people.

Meanwhile in Colombia, as the guerrilla groups formed by campesinos grew larger, and the government decided to intervene with the help of the United States – this marked the official beginning on of the Andean country’s conflict.

By 1962, U.S. military advisers working with the Colombian military visited the country and recommended the creation of paramilitary forces to help the government fight communism.

A secret report from the visit, led by General William P. Yarborough, shows that the team of advisers envisioned a structure that would “be used to perform counter-agent and counter-propaganda functions and as necessary execute paramilitary, sabotage and/or terrorist activities against known communist proponents.” The document indicates that such activities “should be backed by the United States.”

Paramilitary squads subsequently sprouted throughout the country – even in the largest cities such as Medellin – and operated accordingly, at times planting bombs accompanied by graffiti claiming the guerrilla were responsible.

The groups were recruited by and received training from the Colombian military and intelligence.

But paramilitary structures evolved to become a proper enterprise. As researcher and human rights activist Mauricio Romero documented, the largest paramilitary force in Colombia – the United Self Defense Forces of Colombia, or AUC – earned millions through bribery, links with drug lords and authorities as well as through a network of businesses that seemed legal but were operating massive money laundering operations.

At the height of the Colombian civil war in 1988, a group of landlords and drug kingpins – with government help – hired the former Israeli Colonel and mercenary Yair Klein and another three active Israeli colonels, to train the AUC leadership in counter-terrorism tactics.

Throughout the conflict and until today, the counter-terrorism methods employed by paramilitary groups and the Colombian military led the groups to become the most serious violators of human rights, something numerous studies have confirmed.

Both the military and the paramilitary groups worked in coordination to root out entire populations, based on the belief that communities where the FARC guerrilla operated were supporting them.

Neighboring Venezuela had been free from the paramilitary groups – despite land distribution issues and small guerrilla groups operating inside the country – until 1997.

The paramilitary groups captured in February of that year were connected to wealthy landlords and had detailed maps of the border region of Apure. The men claimed they were hired by the Venezuelan General Enrique Medina Gomez.

AUC leader Carlos Castaño confirmed later in 1997 he had met with 140 Venezuelan businessmen and landlords to create a similar paramilitary structure as the one he led in Colombia, particularly in the border region.

After 1997, isolated reports showing Colombian paramilitary involvement in kidnappings and murders were common.

However, in 2002, a video emerged portraying a so called “Commander Antonio” announcing the birth of the United Self-Defense Forces of Venezuela (AUV), inspired by the Colombian AUC. In the video statement, the commander says his group declared Venezuela President Hugo Chavez as a “military target.”

AUC leader Carlos Castaño confirmed that the AUV was working in coordination with its Colombian counterpart.

By 2003, the AUC launched a series of attacks into Venezuelan territory, with as many as 500 Colombian paramilitaries entering the country. A report released by an nongovernmental organization that year revealed that as many as 120 campesino and indigenous leaders had been killed over the previous four years – almost all of them government sympathizers and most residing in the state of Zulia, which shares a border with Colombia.

The sharp rise in paramilitary activity in Venezuela has been most notable in the states of Zulia and Tachira, both bordering Colombia and governed by the right-wing opposition.

In 2004, Venezuelan authorities discovered a paramilitary training camp in the outskirts of Caracas, where they captured a group of 116 Colombian paramilitaries. The farm where the paramilitaries were training belonged to the prominent opposition activist Robert Alonso.

Paramilitary leader Geovanny Velasquez Zambrano later told Al Jazeera during an interview that the men were hired by opposition leader and former presidential candidate Manuel Rosales to kill Chavez. He also said that around 2,500 Colombian paramilitaries were now inside the country.

During February and March 2010, a wave of political murders against leaders of the governing United Socialist Party of Venezuela in Tachira further confirmed the presence of Colombian paramilitaries as a growing epidemic.

As several news reports confirm, paramilitary camps have since spread through the states of Merida and Barinas. Analysts believe many of the paramilitary members are living amongst border communities, awaiting orders and keeping a low profile.

In May of this year, Venezuela's Interior Minister Gustavo Gonzales revealed that over 200 campesino and indigenous leaders have been murdered by paramilitary forces.

This article forms part of a series of information about paramilitrism in the region. Click on the image to learn more.