Eight million tonnes of plastic are drifting through the world's oceans: that's roughly 51 trillion microplastic particles, or more than 500 times the number of stars in our galaxy, and experts warn that figure will increase 40 percent by 2025. By 2050, there will be more 'disposable' items swimming in our oceans than there are fish. 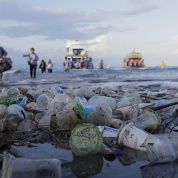 At least 80 percent of the plastic in our oceans comes from land, while the rest flows from discarded fishing and shipping materials. Every second, at least 400kg of plastic enters the marine ecosystem.

Plastic fibers have been detected in 94 percent of tap water around the globe, Orb Media investigators report. Researchers from the University of Exeter say traces of polycarbonates, specifically the chemical Bisphenol A (BPA) used in producing plastic containers, are present in the digestive system of approximately 86 percent of adolescents.

Microplastic expert Dr. Sherri Mason said: "We have enough data from looking at wildlife, and the impacts that it's having on wildlife, to be concerned... If it's impacting [wildlife], then how do we think that it's not going to somehow impact us?"

The first global study of plastics' life-cycle published by Science Advances in 2017 indicated that only 9 percent of the 8.3 billion metric tons of plastic produced around the world is ever recycled.

"You can't manage what you don't measure: it's not just that we make a lot, it's that we also make more, year after year," said lead study director Roland Geyer.

The stretch of the Caribbean Sea shared by Guatemala and Honduras hints at the gravity of the situation. A vast island of garbage is floating between the two nations, suffocating marine wildlife and inflicting irreversible damage on the marine ecosystem.

Honduras' Minister of Natural Resources and Environment Jose Antonio Galdames said: "People do not want to go to the beach because they are afraid of pollution: it's not nice to lie down in sand where you put your back and there's a needle underneath, or you walk and you're going to stick and you're going to find something contaminated."

Clean-up teams have raked in everything from clothes and plastics, hospital waste and syringes, to dead animals and even human corpses.

"In the rainy season... we get up and clean and by the afternoon it is full of garbage again, as if we had not done anything; there are piles and piles of garbage everywhere," Galdames said.

Environmental engineer and oceanic plastic waste specialist Jenna Jambeck said: "We all knew there was a rapid and extreme increase in plastic production from 1950 until now, but actually quantifying the cumulative number for all plastic ever made was quite shocking."

Though the dangers of pollution have been communicated since the first Earth Day in 1970, the global catastrophe continues to contaminate Australia's coral reefs; transform Caribbean beaches into cesspools, and choke the life out of the marine ecosystem with polycarbonate toxins.

Theodore Roszak is a California State University history professor and author of 'The Voice of the Earth – An Exploration of Ecopsychology.' He believes the lack of action is related to how environmental activists address the issue, which he describes as "one-dimensional psychology."

"The movement wants a lot of change very rapidly and tries to get this by scaring people and shaming people," Roszak said.

"It's bad psychology. People resent being talked to that way, and if you continue to talk that way without helping them understand and make the changes, they stop listening. That's what is happening. My concern is that they need a better way to talk to the public."

But there are signs of progress: eco-conscious companies are developing shopping bags and rain ponchos made completely from plant materials such as yuca, cassava, corn and soy.

Some environmental organizations, such as Ocean Helper, offer biodegradable bracelets in exchange for donations to fund clean-up projects.

In Ecuador, one woman has found a way to repurpose the milk cartons commonly found throughout Latin America by turning them into household items, furniture and fashion wear. The brains behind Ecuaplastic has even built a two-story home using 1.2 million milk cartons.

Kenya is one of the nations taking it to the next level by banning the use of plastic bags.

Amazonian Indigenous communities from fishing districts in Peru, meanwhile, are using ancient methods to combat the pollution and 'climate catastrophes' invading their region.

Scientists are exploring the use of creatures such as the plastic-eating wax worm caterpillar; the styrofoam-eating mealworm and, more recently, a plastic-eating enzyme which scientists managed to create 'by mistake.'

Oliver Jones, an Australian chemist at RMIT University, said enzymes are non-toxic, biodegradable and easily produced: "I think [the new research] is very exciting work, showing there is strong potential to use enzyme technology to help with society's growing waste problem.

"There is still a way to go before you could recycle large amounts of plastic with enzymes, and reducing the amount of plastic produced in the first place might, perhaps, be preferable, [but] this is certainly a step in a positive direction."