If you are one of the many who still believes that reggaeton is one of the most misogynistic music genres ever invented, you may be surprised to learn that LGBT collectives organizing their own reggaeton parties are multiplying across the Latin continent. 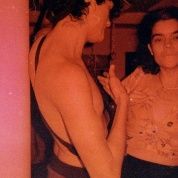 Before entering the venue for the 'perreo intenso' party in the historic center of Quito, Ecuador's capital —perreo being the name of reggaeton's dirty dancing style— you're first asked to read a poetic statement affirming you're an ally in the struggle against patriarchy.

The colonial building has been hosting the series of reggaeton raves "Sin Verguenza" over the past few months. It may well be the only real safe space for LGBT people in town to dance without fear of insult or assault, as Ecuador is one of Latin America's most conservative countries when it comes to gender issues.

The Sin Verguenza is no exception on the continent: from Mexico City's 'Mami Slut' parties to emerging queer collectives such as Hiedrah Club de Baile in Buenos Aires, Argentina, women and LGBT communities have been proudly reclaiming 'perreo' dancing as part of their sexual emancipation from patriarchal values. Often, they just dance it without overthinking it — and, most important of all, without asking your opinion.

Now might be the time to have a proper conversation about the feminist meanings of El Perreo, although women have actually been involved in reggaeton since the early days of the genre.

Let's take a closer look at the reasons that have historically given reggaeton its reputation for being more misogynistic than most other genres, and at the people behind its so-called 'feminist' critique.

With the whitewashing of the genre that started more than a decade ago — when the music industry preferred a Daddy Yankee over a Tego Calderon for instance — it's more important than ever to recall that reggaeton came from people of color living in the marginalized suburbs of Panama, Puerto Rico and New York, who created their own Spanish interpretation of dancehall's dembow riddim in the early 1990s.

When reggaeton's contagious beat spread beyond the working class, conservative elites immediately mobilized against the 'vulgarity' of the genre in the name of women's dignity.

For instance, in Puerto Rico in the mid-1990s, conservative Governor Pedro Rossello led a 'tough hand on crime' campaign in poor neighborhoods against young, non-white men viewed as criminals, including reggaeton singers and fans.

Anti-reggaeton campaigns also came from women supporting conservative views on their gender, or a white feminism typically denying the realities of working-class women of color. In the early 2000s, conservative Catholic Senator Velda Gonzalez led the Anti-Pornography Campaign in Puerto Rico, with police raiding music stores, taking reggaeton CDs off the shelves and even arresting people who listened to the music. In Colombia, the Catholic church literally excommunicated reggaeton, claiming it was responsible for early pregnancies.

But reggaeton bans were never able to contain the contagious beat; on the contrary, they likely helped it spread, and politicians soon started to back the music industry that spawned such a lucrative genre.

This very brief historic contextualization doesn't disregard the misogynistic elements of reggaeton, but calls into question the classist and racist motives of its most vocal critics.

Reggaeton did not invent the objectification of women; it merely reflects the sexism so rife in our societies. It may seem exaggerated, possibly because men from underprivileged backgrounds are trying to reproduce in an inflated way the models power so prevalent in capitalist society: more money, more women.

Frequently, lyrics are less sexist than explicitly sexual, but this so-called vulgarity is a poor excuse for a full ban in the name of women's rights and dignity. The truth is: sex sells.

In a patriarchal society, women are told their value lies in their looks and they must put effort into looking sexy and sexually available; on the other hand, they must not seek attention or sexual intercourse lest they be labeled sluts.

From this perspective, female 'dirty dancing' could be interpreted as a woman internalizing sexist expectations — seeking to please the male gaze through self-objectification, like the 'bellaca' character in reggaeton songs — a woman who does not hide her sexual availability.

Some women self-define as feminists, but admit they indulge in perreo because being feminist in a macho society is hard. Other feminists claim dancing reggaeton is part of an emancipatory move, fighting the conservative side of machismo that represses the expression of women's sexuality.

According to Spanish philosopher Marina Hervas Muñoz, for instance, this is a recurring discourse among European leftist women, including the author of 'Si no puedo perrear, no es mi Revolucion' (If I can't dance reggaeton, this is not my revolution).

"This is a European-centrist interpretation of someone who traveled to Cuba from a very distinct perspective," said Hervaz, whose experience was very different when talking with Cuban women: "Many of them admitted that they danced because 'it's the norm here' or because 'men like it.'"

She concludes that the author of 'Si no puedo perrear' was using the idea of feminist reggaeton so that she could dance without feeling bad about the sexist lyrics.

Hervas has a point: sexual emancipation through reggaeton's dirty dancing does not have the same meaning for white European women as it does for women of color from Latin America, especially those raised with the hypersexualized Latina stereotype.

Feminist empowerment cannot be reduced to an exclusively sex-positive stance. Some women would rather defend their right to refuse the sexualization of their bodies, for instance by wearing a Muslim veil and defining it as a feminist move.

However, besides European women who enjoy dancing reggaeton with more or less convincing feminist arguments, many Latinas have also contributed to the genre by reclaiming agency over their bodies and sexuality — such as Puerto Rican reggaeton legends Ivy Queen 'La Diva' and Lisa M.

"I want to dance, you want to sweat and to move closer to me, to rub my body — and I'm telling you: you may arouse me, this does not mean that I will go to bed with you," sings Ivy Queen in her 2003 hit 'Yo Quiero Bailar.'

Although women can internalize gender stereotypes and even contribute to reproducing them, criticizing any sex-positive stance as self-objectification to please the male gaze largely underestimates the empowering potential of perreo dancing.

And what better way to understand the relation between reggaeton and feminism than by asking the opinion of reggaetoneras?

Chilean singer Tomasa del Real, pioneer of what she calls "neo-perreo" — an evolution of reggaeton dembow with electronic-inflected rhythms — was invited last year to Chile's feminist festival, 'Ruidosa,' but does not identify as a feminist because she associates the concept with white feminism.

"When I say that I am not feminist, I mean that my music is not made as a feminist stance," she told teleSUR in a Skype interview. "But maybe I am more feminist than women who call themselves feminists… I received a lot of criticisms from so-called feminists, for instance when I promoted Puma's clothing line, like 'Why would you sell yourself to the system?' But I find it beautiful, especially because they chose me even if I am not thin. Or, for instance, this teacher who asked me to teach women living in rural areas that they should be careful about older lesbians trying to corrupt them."

Defining not as male or female but as "a transvestite born in the right body," del Real defends a world in which women have the right to objectify themselves, while also having the right to objectify men: "A girl dancing in mini short near a swimming pool is okay to me, if you want to be submitted or liberated, it's okay; this is feminism to me. If you feel like being a slut, or asking men for money, just do it."

Del Real's approach to feminism may seem problematic, but it's coming from someone with an underprivileged background where men don't necessarily enjoy better career opportunities and women can use their sexuality to obtain advantages and social status. "I don't see any privilege in being a man: this friend of mine has to work building boats in unbearable heat for a shitty salary and has to stay with this woman just so he can see his child."

Del Real also evokes girlfriends who trick their partners into having children so they can demand pensions, while defending the right to abortion. As a tattoo artist, the singer believes that being a woman helped her stand out in the profession and gave her more popularity because there was a demand in Chile at the time.