1.    Since 2005 Morales has managed to help facilitate the passing of a new constitution and implement a variety of state funded social programs which have reduced extreme poverty from 38.2 percent in 2005 to 21.6 percent in 2012. 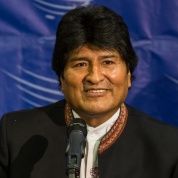 2.    Morales’ government has adopted several macro-economic policies, to increase state revenue from the country’s natural resources in order to invest in social programs. Morales’ strategy helped increase Investment in public spending by over 750 percent over the last nine years.

3.    Under the Bolivia Changes, Evo Comes Through initiative, Morales’ government provided small-scale infrastructure projects to many underprivileged communities, allocating over US$1 billion for over 5,000 projects throughout the country including the construction of medical clinics, schools and gymnasiums.

5.    Another factor that has contributed to the reduction in poverty is the increase to the real minimum wage. According to International Labor Organization (ILO), the last two years Bolivia has achieved the highest increase (104 percent from 2005-2013) in real minimum wage than any other Latin American country.

6.    A central component of the Morales poverty reduction strategy was the creation and promotion of strong food security policies. According to the United Nations Food and Agriculture Organization he report states that as a result of inclusive and pro-poor food security policies, Bolivia saw a rapid decline of hunger by 7.4 percent during 2009-2011 and 2012-2014. The study also noted that Bolivia experienced a sharp decrease in chronic undernourishment in children less than three years of age, which fell from 41.7 percent in 1989 to 18.5 percent in 2012.

7.    Another significant political achievement under Morales was the approval of a new constitution which incorporated many important changes including, granting Bolivian investment priority over foreign investment, and increased autonomy and political participation for the country’s indigenous population.

8.    In 2009, the Morales administration pushed forward a new constitution, which recognized the traditional uses of the coca leaf for the first time in Bolivian history. Bolivia then successfully petitioned the United Nations for a reservation that legally permits coca growing and its licit uses within its borders. In July 2014, the United Nations issued a report, which found that that coca cultivation in Bolivia fell nine percent last year, and a massive 26 percent in the past three years.

9.    Since 2005, industrialization has become a key aspect of Morales’ economic policy, particularly in the area of transportation and energy production. The industrialization initiatives also form part of a broad strategy to transform the South American nation into a regional energy hub.

10.    From a macroeconomic perspective, Morales’ government has made significant progress. From 2005-2013, it’s total GDP growth tripled. Bolivia has also managed to increase its international reserves to 48 percent of it's GDP.