Latin America, like most regions of the world, is under assault by neoliberalism. Public sector jobs are being cut. Government institutions are being privatized. Foreign companies are attacking union leaders. Transportation and utility prices are going up. Laws preventing monopolization and environmental destruction are being rolled back. 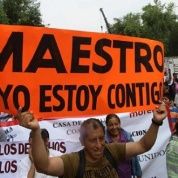 Guided by an unshakeable devotion to the so-called “free market,” right-wing presidents across the region are increasingly implementing what has been dubbed “capitalism on steroids.” Bowing down to the demands of their overlords on Wall Street, these presidents are prioritizing profits for the global 1 percent ahead of their own people.

All of these neoliberal policies are benefiting a powerful cabal of international financiers. But they’re also reigniting broad working-class resistance movements within the countries where unbridled capitalism is on the rise.

But there’s another important group of people leading the working-class movement against neoliberalism in Latin America that’s often forgotten about: teachers.

Teachers in Argentina have been on a nationwide strike for over three days against the right-wing administration of President Mauricio Macri. Demanding better working conditions and salary increases, the Confederation of Education Workers of the Argentine Republic, CTERA, and the Argentine Union of Private Teachers, UAMP, are mobilizing thousands of protesters against Macri.

Both groups are protesting Macri’s decision to transfer authority on minimum wage policies for teachers over to provincial governments, advocating instead for salary negotiations at a national level with the Ministry of Education.

CTERA and UAMP also warn that Macri wants to decentralize the rest of Argentina’s national institutions — like the ministries of Health, Social Welfare and Energy — in order to cut jobs, lower wages and privatize services. Their message is simple: you might be next.

Since Monday, when their strike began on the first day of school, both groups have received the support of hundreds of social groups from broad sectors of society, coordinating dozens of anti-government demonstrations across the country simultaneously.

They’ve received so much support that they’ve decided to indefinitely extend their strike — which was originally suppose to end it Wednesday.

While the Argentine teachers’ movement is raising specific transitory demands, it’s also laying the groundwork for a long-term united front against neoliberalism. The same holds true for the teachers’ movement in Mexico, where “capitalism on steroids” is increasingly pushing millions over the edge.

Since June 2016, Mexico’s National Coordinator of Education Workers, or CNTE, has been protesting education privatization reforms implemented by President Enrique Peña Nieto. These include slashing teacher’s wages, scaling down investment in public school infrastructure, and slashing government scholarships for working-class youth. Tensions reached a boiling point last July when thousands of protesters clashed with police in Guerrero and Oaxaca.

Members of the CNTE have been leading mass protests against Mexico’s “Gasolinazo,” an ongoing nationwide hike in gas prices also implemented by Peña Nieto. The CNTE has been joined by the “normalistas,” teachers from working-class origins who train high school graduates to become educators. The normalistas have been involved in leading important student movements against capitalism and imperialism since the defeat of the Mexican Revolution in 1920.

Together, the CNTE and the normalistas are connecting teachers’ struggles with those of Mexico’s broader working-class, such as gas prices. They have also protested against the North American Free Trade Agreement, NAFTA, considered by many the pinnacle example of neoliberalism. Since NAFTA’s implementation in 1994, thousands of Indigenous teachers in Chiapas have joined the Zapatista Army of National Liberation which is engaged in armed struggle against Mexico’s neoliberal government.

Like Argentina, Mexico’s teachers’ movement is taking a stand against neoliberalism, one classroom at a time.