The upcoming VIII Summit of the Americas in Lima, Peru is crumbling even before it actually begins: U.S. President Donald Trump and Venezuelan President Nicolas Maduro have announced they won’t be attending, while the host country's own government struggles with the recent resignation of former President Pedro Pablo Kuczynski over corruption allegations. 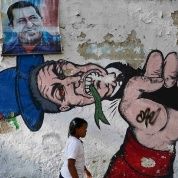 US Advising Allies on Drafting Sanctions Against Venezuela

Trump, on the verge of armed conflict with Russia over Syria, decided that attending the summit wasn't pressing given the crisis in the Middle East and sent Mike Pence in his place instead.

Meanwhile, Maduro said he was boycotting the intercontinental meeting after months of diplomatic pressure from the United States and its right-wing allies in the region prompted Kuczynski to rescind the Venezuelan leader's invitation.

While external factors are throwing the event into potential failure, Peru's own political climate has proved yet another embarrassment for the summit and its organizers.

The VIII Summit of the Americas' main theme is 'Democratic Governance Against Corruption,' in light of the international scandal centered on Brazilian construction firm Odebrecht, which has ensnared presidents and other high-level officials across the continent.

Kuczynski, who would have been the summit's host, resigned shortly before the event over his shady agreement to free former dictator Alberto Fujimori in return for avoiding an impeachment vote over corruption accusations also related to Odebrecht.

It was Kuczynski who banned Maduro from the summit but now he, too, will be absent due to proven economic and political corruption.

But the hypocrisy of the summit is not limited to Peru. Other regional heads of state accused of corruption and promoting policies compromising democratic institutions are still on the invite list.

Michel Temer, who became president of Brazil after what is widely considered a parliamentary coup, is also still attending. Temer is banned from running for president because of electoral fraud charges. Many of those who voted to oust his predecessor, Dilma Rousseff, also face serious corruption charges.

Honduras' President Juan Orlando Hernandez, widely accused of fraud during the November elections, is also still on the invite list.

It's no secret the Organization of American States (OAS) and its Summits of the Americas are U.S. tools to impose an economic and political agenda over the whole continent, based on neoliberal policies of free trade and a superficially 'democratic' platform.

Last year, a coordinated effort between the United States, its allies in the region and the head of the OAS, Luis Almagro, pushed hard to expel Venezuela from the organization based on accusations of human rights violations. That attempt was foiled with the support of several Caribbean nations who voted against expelling Venezuela.

That attempt, as well as disinviting the Venezuelan president from the Summit, is anything but new in terms of OAS policies. A look at the organization's founding and its actions over the years reveals consistently aggressive policies against progressive and leftist governments.

At the beginning of the Cold War, it was important for both the United States and the Soviet Union to keep their allies close through different economic, political, cultural and military mechanisms.

Agreements were signed and international organizations sprouted. It's in this context that the OAS was born: not as a democratic space for dialogue among the American nations, but as an alignment strategy.

The OAS replaced the Pan-American Union in 1948 to represent the political interests of the American 'free world,' dictated by the U.S. interpretation of 'freedom' and 'democracy.' Sporadic meetings discussed commercial interests, regional policies and sometimes whether to sanction or expel a member state.

The only state that has ever been expelled from the OAS is Cuba. In January 1962, member states met in Uruguay and decided to expel Cuba from the organization, arguing that its Marxist-Leninist regime wasn't compatible with the OAS' democratic principles.

Cuba wasn't expelled because the Fulgencio Batista dictatorship was undermining democracy in the island, violating the organization's fundamental principle. It was expelled because a communist revolution was taking place –  and that's what the OAS, and more specifically the United States, could not tolerate.

Article 3 of the OAS charter says: 'Every state has the right to choose, without external interference, its political, economic and social system and to organize itself in the way best suited to it, and has the duty to abstain from intervening in the affairs of another state.' Cuba, however, was expelled because the government decided to take on a different ideological and economic venture than that of other member states.

The United States used several mechanisms in its efforts to isolate Cuba from the region. A blockade was established and Cuba has been absent from the OAS since 1962.

At the same time as socialist movements – both armed and unarmed – were spreading throughout Latin America, the United States decided to tighten its foreign policy, directly intervening in the internal affairs of other OAS members by promoting coups, violating more than one of its articles and foundational principles.

Article 9 of the OAS charter states that a member of the organization 'whose democratically constituted government has been overthrown by force may be suspended from the exercise of the right to participate in the sessions of the General Assembly, the Meeting of Consultation, the Councils of the Organization and the Specialized Conferences as well as in the commissions, working groups and any other bodies established.'

The list could go on to include all the Latin American brutal dictatorships promoted and/or supported by the United States to 'fight communism,' showing that actual democracy is of little concern. The organization and their institutions are interested only in enforcing a strict neoliberal policy that seeks to maintain U.S. hegemony.

But history isn't static and neither are regional alliances.

The turn of the century witnessed the rise of progressive left-wing governments in Latin America, opening the way for a new regional political project in which the northern neighbors wouldn't have the last say on everything.

While the American heads of state and social leaders met in Honduras for the V Summit of the Americas in 2009, Fidel Castro stayed in Cuba carefully listening, reading and writing on the issue and observing the shift in attitude towards his country.

At the time, Ecuador's then-President Rafael Correa spoke of the historical debt the summit and the OAS owed Cuba: "Let us construct something of our own, without countries alien to our culture, our values, and obviously including countries that were inexplicably separated from the inter-American system, and I am referring to the concrete case of Cuba."

Late Venezuelan President Hugo Chavez, also present at the summit, predicted "an interesting battle" in which it would be decided if the OAS would continue to be "a ministry of the colonies," as Fidel Castro had previously described the organization, or submit to the collective will of its member states.

While the assembly ultimately voted in favor of dismissing the decree that expelled Cuba from the organization, the island's Revolutionary Government decided to pass on the offer and let the OAS continue without it.

In one of his reflection articles about that summit, Fidel wrote about a subtle but significant change in regional politics and ideology. The late Cuban revolutionary wrote that "never has such rebellion been seen" in a Summit of the Americas, and that the decision "dealt imperialism a defeat using its very own instrument."

Peru's New President: Summit of Americas to Continue as Planned

The official declaration rejecting the Cuban government argued that the Caribbean state "shares values that are contrary to those of neoliberal and egotistical capitalism promoted by the OAS, and feels that it has the right and the authority to say 'no' to the idea of joining a body in which the United States still exercises oppressive control."

Despite declining to rejoin the OAS, Havana remained open to attending the summit meetings as a guest state. Cuba and its leftists allies sought to invite Cuban President Raul Castro to the 2012 summit in Colombia, but Colombian President Juan Manuel Santos bowed to pressure from Washington despite threats of boycott from the leftist presidents in Brazil, Argentina, Ecuador, Bolivia and others.

Ultimately, Cuba did attend the VII summit in 2015 after Panama's President Juan Carlos Varela approved the request by Cuba and its regional allies to invite President Raul Castro. That was the meeting in which Castro and Obama met and shook hands, resulting in the subsequent thawing of decades-long tensions between the two nations.

The story of Cuba at the OAS is bitter-sweet. It hits at the heart of the current affairs in Latin America and how a surge in right-wing politics is undoing a brief moment of progress in favor of the peoples of the continent.

Now, as right-wing governments are gaining control in Latin America, Venezuela is the OAS' new boogeyman for the very same reason Cuba was expelled – and the United States, with the far-right administration of President Trump, is yet again holding the reins.