Steve Biko, who spent most of his young life organizing against Apartheid South Africa, was born today on Dec. 18, 1946. He would have been 69. 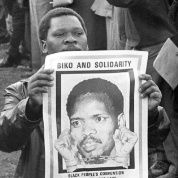 Biko, who continues to be a key Black liberation figure today, began his activism by founding the South African Students’s Organization (SOSA) in 1969 when attending medical school, a rare opportunity for the vast majority of Black people under apartheid rule.

​The SOSA was a conscious break from the multiracial student organization National Union of South African Students, which many resented for only having white men in leadership positions. The new group meant to specifically address the needs and grievances of non-white students, classified as African, Indian, or “Colored” under Apartheid Law.

The move was seen as controversial for suggesting a turn to “militancy” and “alienating” white liberal allies. Biko contested this in a presidential address to SOSA, saying, “It seems sometimes that it is a crime for the non-white students to think for themselves. The idea of everything being done for the Blacks is an old one and all liberals take pride in it; but once the Black students want to do things for themselves suddenly they are regarded as becoming ‘militant.’”

Biko’s student organization was part of the larger Black Consciousness Movement, which grew out of a power vacuum left behind after the government systematically persecuted, jailed, banned or exiled the majority of the anti-Apartheid leaders of the time.

The new Black Consciousness Movement was made up of Black workers and youth who vehemently organized against Apartheid with other Black liberation movements that played at the time as sources of pride and inspiration, like the Mozambique Liberation Front that defeated Portuguese colonialism, and the Black Power movement in the U.S.

The politics of Biko, proclaimed by many as the father of the Black Consciousness Movement, wasn’t premised on uprooting white people from South Africa. However, he did question if coexistence in the country was possible. “One wonders if the interests of Blacks and whites in this country have not become so mutually exclusive as to remove the possibility of there being room for all of us,” Biko wrote.

This led him to think that the place for white supporters in Black liberation required firstly to “remove (the white man) from our table, strip the table of all trappings put on it by him, decorate it in true African style, settle down and then ask him to join us on our own terms if he liked.”

RELATED: The Global African on Land Grabs and Colonialism

The Black Consciousness Movement culminated in the Soweto Uprising, when high school student protests broke out in 1976 against Bantu education, which according to one student “is designed to make us slaves in the country of our birth."

The two-year uprising spread to Black townships across the country, killing an estimated 176 people, including schoolchildren.

As the father of the movement, Biko became an immediate target for government repression, which led to his eventual death at the age of 30 while in police custody on Sep. 12, 1977.

Biko’s death was highly controversial after it came to light that he died from severe brain damage suffered while in police custody, two weeks after officials had claimed his death was a result of a hunger strike. A policeman who eventually confessed to being complicit in beating Biko to death never faced criminal action.

In the wake of Biko’s death 17 groups associated with the Black Consciousness Movement were declared illegal by the South African government, but his legacy and philosophy of resistance continued to inspire leaders in the African National Congress and Black liberation movements worldwide up to this day.

On the 20th anniversary of his death in 1997, Black Liberation hero Nelson Mandela said:

“One of the greatest legacies of the struggle that Biko waged—and for which he died—was the explosion of pride among the victims of apartheid. The value that black consciousness placed on culture reverberated across our land; in our prisons; and amongst the communities in exile. Our people, who were once enjoined to look to Europe and America for creative sustenance, turned their eyes to Africa.”

Mandela added that “He encouraged fearless and open debate, inspiring oppressed people to recognise their own worth, take joy in their own humanity, and recognise—as equals—the humanity of others.”