Progressives in Latin America have witnessed a string of political defeats in the past three years after governing for over a decade and openly challenging United States hegemony within the region. 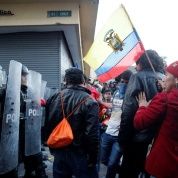 The expected shifts in economic and foreign policy took place. Argentina and Brazil embraced neoliberal and diplomatic orthodoxy in the form of financial and economic liberalization, austerity measures, labor reforms rejected by workers, and improved relations with the United States and international financial institutions.

Venezuela, Bolivia, and Ecuador remained an obstacle in the U.S.’ quest to regain control in the region.

However, since Lenin Moreno was elected president in 2017, his departure from his successor's Citizens Revolution political platform sparked doubts on whether Ecuador would maintain a foreign policy rooted in the principles of sovereignty and regional integration.

This year, Moreno has dispelled any doubts.

A review of the recent visit by U.S. Vice President Mike Pence and of the contents of the Productive Development Law, approved on June 21, reveals how Moreno has embraced the interests of Ecuador’s business sector and U.S. geopolitical interests.

U.S. Vice President Pence started his third Latin American tour on June 26, which took him to Brazil, Ecuador and Guatemala. As the U.S. announced its new attempt to “restore democracy to Venezuela,” images and videos of Latin American toddlers and children kept in prison-like conditions after being separated from their relatives by U.S. authorities flooded the internet.

The world and people of the U.S. responded with outrage. But outrage did not make its way to Ecuador’s presidential palace, Carondelet.

During the joint press conference, Moreno failed to denounce Trump’s immigration policy, instead he thanked the U.S. government for “its commitment to put an end to this humanitarian problem,” while Pence focused on Venezuela’s economic migrants and then went on to “respectfully urge Ecuador... to take further steps to isolate the Maduro regime.”

Intentionally or not, the judicial order for preventive prison for former President Rafael Correa, allegedly linked to a failed kidnapping in 2012, has served that purpose. On July 4, Moreno’s foreign minister Jose Valencia Amores, announced the suspension of the trip of Ecuador's new envoy to Venezuela and recalled its ambassador in Bolivia for consultations over comments supporting Correa.

The U.S. found a compliant Ecuador, eager to please to secure a commercial agreement coveted by Ecuador’s business class.

“We will work to eliminate any impediment with the aim of holding a bilateral dialogue on commerce and investments by the end of 2018,” Moreno told Pence and the nation.

He has already worked on two fronts: economic reforms and bilateral cooperation in security matters while aiding the dismantling of the Union of South American Nations (Unasur).

On June 21, at the request of the executive branch, Ecuador’s National Assembly approved the Productive Development Law, a law rejected by economists and activists for threatening social services and violating the 2008 Constitution.

The law prohibits the approval of the country's annual budget with a primary deficit. A provision that according to Ecuadorean economist Andres Arauz, who worked in Ecuador’s planning agency and the Central Bank will adversely affect social spending.

“Every year there must be more revenue (taxes) than expenditures (education, health, security)... There are only two ways to make the numbers match. You either increase revenue or reduce spending,” Arauz explained.

However, the same law includes tax reductions and exemptions for foreign investors for up to 15 years, as well as exemptions for all new investments on paying the tax on currency sent abroad.

Economists have warned that eliminating the second tax could gravely affect Ecuador’s dollarized economy by allowing the extraction of large sums of money.

The law also includes debt forgiveness for private companies who have failed to pay their share of taxes to Ecuador’s Internal Revenues Service. Economists estimate the country is giving up at least US$2.2 billion.

Instead of increasing public revenue to sustain social spending, the law corners the state forcing it to give up revenue and cut public spending.

In adherence to International Monetary Fund (IMF) recommendations, one of the law’s articles bans Central Bank loans to the Finance Ministry, which helped the former government to cope with lack of liquidity without affecting social spending or halting large infrastructure projects.

Sociologist Jonathan Baez has described these decisions as “self-sabotage with the aim to access multilateral loans as the only possibility for financing.” During Pence's visit, Moreno thanked the U.S. VP for his “willingness to support Ecuador’s financial needs by strengthening dialogue with multilateral organizations.”

Article 422 of Ecuador’s 2008 Constitution prohibits “treaties or international instruments in which the state relinquishes sovereign jurisdiction to international arbitration agencies.”

Moreno presented these reforms as inevitable to avert an alleged economic crisis. However, economic indicators such as rising oil prices and a sustained economic growth of around three percent contradict this narrative of inevitability.

The aim is to make Ecuador attractive for investments, disregarding the cost to national finances and to the people who rely on the state’s social services. It’s a mad race to the bottom all over again.

In a recent interview with David Suarez, spokesperson for the Center for Economic and Social Rights (CEDES for its Spanish acronym) explained that “austerity must be understood in its ideological, political sense as spending cuts for the people and advantages or subsidies to private capital.”

Diplomatic relations between Ecuador and the U.S. had deteriorated severely under Correa’s government. But that wasn’t the result of Correa’s whim, but of over two decades of social mobilization in rejection of U.S. foreign policy in Ecuador and the region, especially its military expansion and promotion of Free Trade Agreements (FTA).

It has been over 10 years since social movements, organized civil society and progressive governments in Latin America effectively defeated the U.S.-sponsored Free Trade Area of the Americas (FTAA).

However, today “there is more pressure from Ecuador’s government to the U.S. government to sign a trade agreement… and it is not necessary to bolster exports because many Ecuadorean products are already entering the U.S. with no tariffs,” David Suarez explains.

Pence didn’t visit Moreno to sign an FTA, but because he has been tasked with gaining hemispheric support for the U.S. campaign against Venezuela and with paving the way for greater military control over the region. “Ecuador gains regional relevance in that sense,” Suarez affirms.

The U.S. might be swayed into accepting an FTA with Ecuador, but it will come at a cost for the country and the region; a cost the Ecuadorean government has already started to pay.

Ecuador played a leading role in the efforts to rid the region of U.S. military presence through the promotion of regional military cooperation within Unasur.

This year, the U.S. managed to get its Office for Security Cooperation re-invited after offering Moreno help in dealing with a series of attacks and kidnappings in Ecuador’s northern border with Colombia. Correa had expelled the Office in 2014 arguing it had gained undue influence over Ecuador’s national security institutions, including the military and the police.

Pence thanked Moreno for this gesture during his visit.

One of the U.S. most significant diplomatic victories thus far has been to plunge Unasur, the only regional integration body with no U.S. presence, into a crisis, when six U.S. allies and members of the Lima Group announced their “temporary” withdrawal.

Ecuador was one of the other six members that remained, which is also Unasur’s host country, but that has since changed. On July 5 President Moreno announced he was asking “Unasur to return that building so it can be better used.” Later that day he announced the building would be given to the National Confederation of Indigenous Nationalities to house the intercultural university Amawtay Wasi, which was shut down in 2013 for not meeting standards of quality.

Capital, whether national or transnational, stands to win. Ecuador’s economic elites, who have mostly been satisfied with importing goods will win if an FTA is signed with the U.S. because they will avoid paying import taxes. Investors who will pay no income tax will win.

Many more will lose.

Pence’s announcement that “the U.S. will also work with Ecuador to confront the menace of drug trafficking and criminal organizations” is no good news for the people who live in Ecuador’s northern border. If U.S. cooperation with Colombia and Mexico are any indication, then these areas will likely see an increase in state and non-state violence.

Furthermore, as the state’s budget shrinks, Ecuadoreans will lose access to free public education and health. Many have already lost access to social programs like the human development bonus, and the Ministry of Social and Economic Inclusion has reported a cutback of US$10 million in their budget.