When you think of Western capitalism and imperialism, what usually comes to mind are aggressive superpowers such as the U.S., the U.K., France, Germany and so forth. Northern European nations such as Norway, Denmark, Finland, and Sweden, on the other hand, are seen as good-natured and insular, often used as examples of the way governments around the world should treat their citizens. 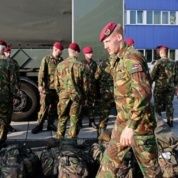 ANALYSIS:
It's Time to Dismantle Dutch Liberalism from Within

There is no denying that their policies at home are more progressive than say the U.S., but it's due in large part to strong unions and their decades of struggles to win such rights. Scandinavian workers have won policies that guarantee basic social safety in healthcare, education, employment and housing. However, Denmark, Norway and Sweden are not being seen in this period of refugee crisis as welcoming nations for those fleeing war and poverty.

In the 2016 presidential debates, Bernie Sanders pointed to them as model nations that the U.S. should “learn” from. A close examination of the region will demonstrate that Scandinavia largely maintains itself through violent imperialist policies just like other Western nations.

In 2008, Norwegian communications multinational, Telenor — partly owned by the state — was exposed in a documentary as partnering with a Bangladeshi supplier that employed child labor in horrendous conditions. The report also uncovered that the children were made to handle chemical substances without any protection and one of the workers even died after falling into a pool of acid. Not only was the treatment of workers unacceptable, they also ruined the crops of farmers in the surrounding areas with the waste from the plant. Like other Western multinationals that deliberately go to the developing world looking to save money on labor and operations costs, the company washed its hands of the accusations, denying knowledge about their partner's inhumane practices.

Similarly, Norwegian oil and gas company Statoil, also partly owned by the state, has been involved in multiple corruption cases around the world — especially in underdeveloped countries — where they have bribed state companies and government officials in order to obtain licenses for extraction. Their involvement is not only limited to these aggressive economic practices, they are also deeply involved in the West’s military exploits. Norway dropped 588 bombs on Libya but scarcely is mentioned as being part of these imperialist operations. Statoil has since started joint extractions operations worth millions in the ruined country.

Sweden’s foreign policy record is no better. Technology firms like Saab, BAE Systems, and Bofors compete with the U.S. and Israel in their development of a large variety of weapons that are sold to 55 countries around the world in deals worth billions. It seems that Sweden, like their Norwegian neighbor, actively participates in denying human rights to millions across the globe and especially in underdeveloped nations.

The Swedish clothing giant H&M can retail affordable products in rich nations and make huge profits only because they exploit and underpay workers in impoverished nations such as Bangladesh. As John Smith points out in his book "Imperialism in the Twenty-First Century," only 0.95 euros of the final sale price of an H&M T-shirt remains in Bangladesh to cover the cost of the factory, the workers, the suppliers, and the government. The remaining 3.54 euros goes for taxes and transportation in the market country, with the bulk going to the retailer. In other words, Western nations capture most of the profit although it is the poor workers and nations that have put most of the input in terms of labor and resources.

RELATED:
EU Court Rules Hijab Can Be Banned from Workplaces

The Danish-British firm, G4S is the world’s largest security company and is known for its long list of controversies. They have supplied services to Israeli prisons and checkpoints, they have been accused of mistreatment of immigrants in detention centers, they have also played a huge role in protecting Western imperialist interests such as oil refineries and the territory around the Dakota Access pipeline. However, since the U.K. is known as the most aggressive of the two nations, the Danish component is frequently swept under the rug despite the fact that they were the founders and developers of the company.

It is no surprise then that the Nobel Peace prize, which was founded in Sweden and based in Norway, has given known war-mongers such as President Barack Obama and Colombian President Manuel Santos, among others, the award in what some argue are highly political moves.

The ‘Nordic Model’, as it has come to be known is hardly a system that we should look to for inspiration. No model, system, or structure that depends on the exploitation and domination of others can be ethical. Western nations and their people — if they are to be taken seriously by the rest of the struggling world — must begin to think about developing socialist political and economic structures that are internationalist and crucially, anti-imperialist at their foundations.

The social gains won by Western nations cannot and should not be made at the expense of exploited nations and people in the Global South. This social-imperialist dynamic seen in Scandinavian nations will ultimately fail in the long-run as it is harming much more people than it is benefiting. Those most likely to deal a deadly blow to capitalism today are those in the most dreadful conditions, which find the current Nordic Model directly in the way, rather than in the lead, of world progress.