A group of scientists, marine ecosystem protectors and government officials from several countries throughout the Americas are working together to create the “Galapagos-Cocos Swimway.” 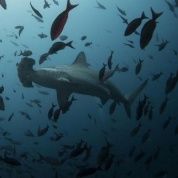 The swimway will be a “new type of international (marine) management” system, Carlos Chacon, Director of Pacific Network (Red Pacifico in Spanish), a principal proponent of the swimway, tells TeleSUR.

He and other ocean researchers want to implement the swimway with marine life protections along the Cocos Ridge, a 700km underwater mountain range that connects the Galapagos Islands Marine Reserve in Ecuador and the Cocos Island Marine Reserve in Costa Rica in order to safeguard several varieties of at-risk species of sharks, whales and sea turtles that frequently mate and migrate along this oceanic corridor.

He says the proposed swimway would be the first internationally, “specially managed” marine conservation project, taking into account ocean ecologies and human economies.

Pacific Network, a multinational marine conservation organization that works to protect the 2 million square kilometres of ocean waters off the shores of Costa Rica, Panama, Colombia and Ecuador, doesn’t have policy details, yet but its director says the oceanic project may require fishing seasons for “certain species of fish” in certain areas along the ridge.

The Cocos and Galapagos Islands Marine Reserves are doing a great good job at protecting sea life within their respective protected areas, says Chacon. “But what happens when these turtles, sharks, whales and manta leave the reserves?”

Chacon makes this statement based on research conducted by Migramar.

Migramar, an international marine research and conservation organization whose members include The Smithsonian Tropical Research Institution, the University of California at Davis, California, and marine protection organizations from Colombia, Ecuador and Mexico, has been tracking the migration patterns of key marine animals along the proposed Galapagos-Cocos Swimway for the past 12 years.

The organization has found that the proposed swimway area is a biological “hotspot” and a migratory haven for species of sharks, whales, sea turtles between Galapagos and Cocos reserves.

Several species of these big fish, mammals and reptiles - including hammerhead and silky sharks, sperm whale, and leatherback turtles - are endemic to these marine reserves and at risk of extinction.

The endangered status of these sea animals, particularly for the hammerhead and silky sharks in Ecuadorian waters, is due largely because nationally registered “artisanal” boats, fishing for yellowtail tuna and dolphinfish also fetch tons of these at-risk species as “bycatch” - or unintended casualties, explains Santiago Bucaram, Ph.D., Pacific Network consultant and Director of the Center for Economic Investigations at Ecuador’s Polytechnical University in Guayaquil, or ESPOL.

Bucaram tells TeleSUR that between 2008 and 2012 artisanal “nets caught over 40,000 tons of sharks as bycatch, or at least 250,000 sharks per year in Ecuadorian waters” most of these sharks were caught in the proposed swimway area pertaining to Ecuador.

The Pacific Network consultant says that the 45,000-registered artisanal Ecuadorian fishing boats “use longlines, a fishing gear that is not selective. Small or juvenile fish can escape through the long lines, but larger and more vulnerable species such as sharks, dolphins, and small whales can’t.”

According to Bucaram, artisanal fishermen generally use mother boats to transport a group of five to ten speedboats to biodiverse sensitive areas putting pressure at a level on par with industrial fishing capacity, rather than the small-scale activity they were intended to be.

He adds that the number of bycatch sharks captured in the swimway during the same time was “far greater than what it was caught by the industrial purse seine fleets in the entire Eastern Pacific Ocean, a region 100 times bigger” than the swimway.

Professor Bucaram says the issue is largely political. Artisanal fishers are allowed to bring ashore and sell bycatch shark as long as they declare it as such. This regulation was allowed in 2007 under previous president Rafael Correa and allows artisanal fleets to be the judge and jury of their own bycatch.

The Pacific Network consultant even says that the high rates of shark bycatch in Ecuadorian waters indicates it’s not accidental, but purposeful. In fact, he believes that today sharks are a “de facto” target fishery of the Ecuadorian artisanal fleet.

Therefore, Bucaram concludes that bycatch of endangered sharks within the proposed swimway corridor doesn’t merely implicate international vessels but is an “in-house” issue.

It’s not just international ships, such as the Chinese ship caught last August traveling through the Galapagos Islands Marine Reserve carrying over 6,600 endangered shark species that are putting marine life at risk in the swimway waters, says Bucaram, but that Ecuador’s artisanal fishing fleets are also responsible.

Being that the Fu Yuan Yu Leng 999 didn’t catch any of the several tons of shark found on board its hull, other experts also suspect the endangered species were illegally transferred to the Chinese flag ship at sea by smaller fishing vessels in the area.

While still suspect in Ecuador, illegal shark finning-catching, cutting off their fins and throwing the live body back into the water - has plagued the potential swimway waters of Costa Rica for over a decade.

The practice was banned by a 2005 fishing law following environmental rights activists, Randall Arauz’s fight against the practice in Costa Rican waters. He was later awarded the Goldman Environmental Prize for his advocacy.

However, Arauz and Bucaram say the Costa Rica Fishery Institute, INCOPESCA, charged to enforce the law, rarely does. Arauz, in a 2013 interview says that the independent agency avoids enforcing the shark finning ban because its board members are personally and professionally tied to the fishing fleets that commit the illegal practice. The Goldman recipient says having INCOPESCA oversee fishing is like “Dracula taking care of the blood bank.”

Bucaram concurs that INCOPESCA is hardly an oversight entity but a privately-run institute with close connections to international fishing companies. Its members and those it protects would take a destructive economic hit were they to apply the ban.

The statistics corroborate these claims. In 2011 alone the practice killed around 400,000 in Costa Rica ocean waters, including those in the proposed swimway region.

Fisherman in Costa Rican waters say they easily evade the INCOPESCA inspectors searching for illegal fins by hiding them in their boat’s engine room, or merely paying them off.

Shark fins captured along the swimway contribute to a multibillion-dollar black market where a pound currently averages $US350, and the coveted shark fin soup easily costs $US100 per bowl, served mainly in China and Hong Kong.

These are the obstacles that Galapagos-Cocos Swimway advocates are up against.

Yet both Chacon and Bucaram stress that they and other swimway developers don’t want to implement heavy restrictions or ban fishing in this oceanic region, but create a sustainable marine environment that is also economically viable for commercial and tourist fishing.

“This is a new, international” way of creating policy “This is a process [and] we’re still in the first parts of the process,” Chacon says to TeleSUR. He reports that he has had “very positive” talks with members of the Costa Rican government regarding the proposed project, and is looking forward to January talks with members of Ecuador’s Ministry of Environment, among other ministries.

The Pacific Network director says “We never thought of these two countries as neighbors, but they are. They share an immense oceanic border.”

The two swimway proponents are hoping the proposed protected oceanic corridor will become a reality in the next two to three years.