In rural Guatemala, community assemblies have given birth to a new political party that aims to build a plurinational state, nationalize basic services and restitute indigenous territories, objectives that go beyond the 2019 general elections. 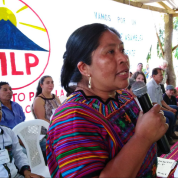 The Campesino Development Committee (Codeca) was founded in 1992 as a political organization to fight for the most basic needs of Guatemala’s indigenous landless and campesinos. Since then it has incorporated a number of demands, including the nationalization of the electricity industry.

Its bases, gathered in assemblies and following the traditional political organization of their communities, decided to create a legal political party to represent their interests and continue to organize the struggle.

The Movement For the Liberation of the Peoples (MLP) was born out of this decision in 2018 and now has 20,000 members from all across Guatemala, including the capital city where Codeca has an urban cell.

Thelma Cabrera, a prominent leader of Codeca and the MLP, says the MLP is more of a “political instrument” than a “political party” because it emanates from community assemblies by Garifuna, Xinca, Maya and Mestizo peoples to fight for their most basic rights, without a boss.

“As a movement, we decided not to continue without an arm. We don’t want to be an amputee, we want to build the political arm of the social movement,” Cabrera told teleSUR. “The traditional political parties have owners, they speak and offer things to the people in order to manipulate them, so they can keep holding on to power. They’re financed by private companies and that’s why we are as we are. Controlled by the three branches of the government, by the powerful, because that’s the role of the political parties, buying dignity. The main characteristic of the MLP is clear and historical. It has cost us blood. Our partners have lost their lives for it.”

The MLP’s main objectives are the nationalization of basic services, especially electricity; to promote a Popular and Plurinational Constituent Assembly, in order to build the plurinational state from the indigenous’ autonomies and territories; to recover the land and water for cultivation and national consumption.

"We're not building another political party, but a political instrument called MLP to promote the plurinational STATE and wellbeing."

For Cabrera the objectives are what makes the MLP different from other political parties, “to organize the country around communities to recover and defend the dignity and plurinational sovereignty for the wellbeing of all.”

With more than 60,000 members from all sectors of Guatemalan society, according to its founder Mauro Vay, Codeca’s historical demands have appealed to the dispossessed, indigenous people and campesinos, but also detractors and enemies.

Being born out of an assembly process, the MLP will participate in the elections in a unique way. Its executive committee was elected in December during an open assembly in Suchitepequez and includes members of different Maya peoples, as well as Xinca, Garifuna and Mestizos.

“We elect them at the assemblies because of MLP was born out of the communities. We have to fight at a local level. Minding the mayor, representatives, the president is important and the people will decide over that at its time, but it has to go through an assembly process born from the people. Yesterday’s assembly was massive because the people have appropriated the political instrument,” explains Cabrera.

Although the MLP will indeed participate in the elections, Cabrera says that the political instrument’s objective is “not to win the elections, but to change the situation of the people of Guatemala.”

One of these concrete objectives it the promotion of a Plurinational Constituent Assembly, hoping to include the demands of the people of Guatemala within mainstream politics and represent the diversity encompassed in the state.

“In Guatemala, there are 25 languages and four peoples, which is why we’re urging the creationg of a plurinational state with the participation of all the people. I speak the Mam language and I belong to the Mam people. There you have the Maya, Garifuna, Xinca and Mestizos, with different languages. The important thing is that we’re integrated in participation. They didn’t consult us or our grandparents for the Constitution. It was written by and for the criollos (descendants of Europeans) and their friends, while we are immediately jailed, murdered, belittled and stigmatized as we demand our rights. That’s the reason for this proposal we’ve been planning since 2012. Now we’re at the national stage. We’re bringing a process with us.”

But a plurinational state, recognizing the plurality of languages, cultures and policies, would be incomplete without a fair redistribution of the land, as a great part of Codeca’s sympathizers are landless Campesinos that struggle in everyday life.

“Within the proposal for a Constituent Plurinational Assembly, we have 14 points. Regarding water and territory, we’re proposing the restitution of ancestral territories to the respective indigenous peoples. We’re proposing the recognition of collective property along with private individual property, with its limits.”

Codeca has been accused of fostering social unrest by the political establishment. The former president Otto Perez Molina, ousted due to corruption accusations in 2015, described the organization as “a social cancer expanding across the country.” His successor Jimmy Morales has not taken a softer stance, even accusing them of aligning with the Public Ministry and the United Nations-backed International Commission Against Impunity in Guatemala (CICIG) in an attempt to remove him from the government.

The Codeca has always supported CICIG’s investigations and protested in their favor, says Cabrera, because the people of Guatemala do listen to them.

“We have been denouncing corruption for years as Codeca, but it wasn’t until CICIG came that people believed there is corruption in Guatemala,” says Cabrera.

The organization and its supporters have denounced the government and the economic elite of carrying out a defamation and intimidation strategy against them, sometimes going as far away as murdering social leaders.

“There’s a lot to investigate, such as the murders of human rights defenders that are still impune. They also accused defenders of crimes and put them in preventive prison while they’re being investigated, but those that we point at ignore justice. The investigations over the death of Luis Arturo Marroquin are stagnant and the government is still there doing nothing,” said Cabrera.

Marroquin, a member of Codeca’s leadership, was shot in the back and killed in Guatemala City in May 2018. Before his murder, Codeca accused Morales of "strengthening hatred and resentment" against the organization, instead of seeking unity among the people.