Last year, the United Kingdom marked the 50th anniversary of the passing of the Sexual Offences Act 1967, which decriminalized private homosexual acts between men over 21 in England and Wales. The law erased the centuries-old Buggery Act and allowed the UK to proudly proclaiming its so-called progressive stance on the LGBT rights to the rest of the world. 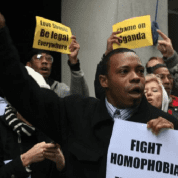 Originally instituted in 1533, during the reign of King Henry VIII, to make homosexual sex a crime punishable by death, the British empire passed its antiquated law to all the colonies it ruled at the time and while modern-day Britain has liberated itself in statutes from homophobia and transphobia, many of its former colonies continue to be shackled with anti-LGBT laws which were passed on to them as a kind of heirloom.

"Criminalisation of consensual same-sex acts variously called ‘buggery,’ ‘unnatural intercourse against the order of nature’ and ‘gross indecency’ occurs in about 80 jurisdictions across the globe. The Commonwealth is front and center in this figure: there are 54 Commonwealth countries representing just over 25 percent of all countries in the world, yet the Commonwealth represents over 50 percent of the jurisdictions that criminalise," Treva Braun, Legal Director, Human Dignity Trust, wrote in a piece titled, "The Tenacity of British Colonial Laws in the Lives of Sexual Minorities in the Commonwealth."

"Currently 36 out of 52 Commonwealth nations criminalize either male or female homosexuality. Many of these countries, including Mauritius, Bangladesh, and Jamaica, criminalize homosexuality under the exact laws that were imposed by Britain during the colonial era," according to the New Statesman.

In India, where most religious temples were built by the 12th century, such as the renowned Khajuraho in the central Indian state of Madhya Pradesh has centuries-old figures engaging in gender fluid sexual acts.

"One does find images of either women erotically embracing other women or men displaying their genitals to each other, the former being more common (suggesting a tilt in favor of the male voyeur)," Devdutt Pattanaik, a prominent Indian mythological researcher wrote.

Scholars have argued that even though homosexuality was frowned upon and was a punishable act, several members of the Indian royalty during different empires engaged in homosexual acts.

Fast forward to when the British invaded India in the 1800s. Section 377, the modern Indian law against homosexuality in its current form is a gift of India's most recent colonizer, the British. The Empire not only drained India, one of the British largest colonies,  of its wealth and resources but also left behind a legacy of horrendous buggery law.

Over 70 years since its independence, the south Asian country is still jostling with decriminalizing homosexuality which was set in motion by the 16th-century colonial-era law.

The legislation outlined in Section 377 of the Indian Penal Code bans "carnal intercourse against the order of nature with any man, woman or animal."

In 2013, India squashed significant gains won by LGBT activists by reversing the ruling which decriminalized gay sex four years earlier. But at the beginning of this year, India's top court offered a ray of hope by reopening a debate to review decriminalizing gay sex.

"Choice can’t be allowed to cross boundaries of law but confines of law can’t trample or curtail the inherent right embedded in an individual under Article 21 of the Constitution," the court added.

One of the lasting legacies of the British empire to the Indian subcontinent is the partition of India and Pakistan, which led to a mass exodus between the two countries. But let's not forget the sodomy laws.

"Pakistan is from a region that was historically liberal in terms of sex. There were even times that femininity in men was celebrated," Qasim Iqbal, founder of Naz Male Health Alliance (NMHA), Pakistan’s first and only LGBT+ rights organization, told the New Statesman.

"In Pakistan, sodomy still carries a jail sentence of up to ten years under the Penal Code of 1860, which was introduced by the British," the New Statesman reported.

“It wasn’t until the white people came with their Christian values that all hell broke loose and we find ourselves in this situation," Iqbal added.

In a Human Rights Watch report published in March 2018, Paradise Lost pointed out that it was "easy to spot remnants of British colonial rule in much of the Eastern Caribbean."

The report sheds light on the atrocities faced by LGBT community in seven islands, Antigua and Barbuda, Barbados, Dominica, Grenada, Saint Kitts and Nevis, Saint Lucia, and Saint Vincent and the Grenadines, which are some of the worst hit thanks to their colonial legacy.

"Seven islands have a more sinister hangover from colonial days – laws against buggery and gross indecency making same-sex conduct between consenting adults illegal. While no island actively pursues criminal investigations for breaking these laws, their mere existence intensifies a toxic homophobic culture that allows lesbian, gay, bisexual and transgender (LGBT) people to be bullied at school, that fuels their mistrust of police, and allows them to be alienated from – or even abused by – their families."

Rosa, 23, member of the LGBT community on St. Kitts found the first LGBT organization based on her home island in 2016, called St Kitts/Nevis Alliance for Equality (SKNAFE Alliance) as a refuge for those suffering extreme violence.

"Life on St. Kitts can be awful for gay men. They are frequently harassed, threatened, attacked, tossed out of their homes, and abandoned by their families for being gay," the Human Rights Watch report pointed out.

The UN members during its Universal Periodic Review asked Antigua to abolish its anti-buggery and serious indecency laws in 2016, but the Caribbean island said that the "moral and religious" nature of Antiguan society would need to change first. The island, however, acknowledged the laws would need to change if it were "serious about human rights."

While in Dominica, during the country's 2014 Universal Periodic Review, "it rejected a recommendation to overturn its gross indecency and buggery laws, saying it was "not prepared to introduce any legislation to Parliament decriminalizing sexual relations between adults of the same sex," the HRW report noted.

In a shocking move, some church ministers in St. Vincent and the Grenadines, along with four other countries sent a letter to the United States' president, Donald Trump in 2017, urging him to stop promoting U.S. organization from LGBT rights abroad.

"The country refused to overturn its buggery and gross indecency laws, even after a request during its Universal Period Review by other UN-member countries, stating that the laws are supported by its "Christian society." St. Vincent, however, did note that "more and more people – especially young people – accept gays and lesbians," the HRW report noted.

But there exists a theoretical mechanism which does have a reparative quality.

In 2013, the Commonwealth Equality Network (TCEN) became the first LGBT+ organization to receive Commonwealth accreditation. The same year, "the Canadian and Scottish parliaments apologized to gay men for historical homophobic laws, close cooperation between both governments and TCEN member organizations Egale Canada and Equality Network resulted in a genuine moment of reconciliation between citizens and state," the Newstatesman reported.

To sum it up, Braun, Human Dignity Trust's legal director said it well.

"British colonialism, imbued as it was with Victorian puritanical values, continues to govern the lives of hundreds of thousands of LGBT people around the Commonwealth. As such, the Commonwealth, as an institution, remains both significantly implicated in the persecution they face and key to its eventual eradication," Braun, the Legal Director, Human Dignity Trust, concluded.

"If the UK is serious about tackling human rights abuses abroad then it should use all channels and mechanisms at its disposal. Though it's probably now more famous for staging second-rate athletics tournaments, the Commonwealth has sought to address human rights violations perpetrated by its affiliates. But despite its 2013 Charter denouncing all forms of discrimination, there's been little appetite for specifically tackling the criminalization of homosexuality in 42 member states," Vice News reported.

"So far the Commonwealth Heads of Government Meeting has never discussed LGBTI rights at any point in its entire history," human rights campaigner, Peter Tatchell, told the Vice News. "For the last thirty years that I've been involved any such discussion has been vetoed. Successive British governments just haven't lobbied hard enough to get LGBTI rights on the Commonwealth agenda."


Vice News - The Human Rights Watch - The Newstatesman - The Barrister