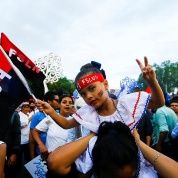 RELATED:
In Nicaragua the Month of July Is Sandinista

On this day, Nicaraguans will head to the streets to celebrate the triumph of their revolution "guided by Christianity, love of the neighbor, socialism and solidarity," as convoked by Vice-President Rosario Murillo.

"We are on the way to new victories of work, of entrepreneurship, of productivity, of hard-working, of reconciliation and peace, victories for the prosperity of all families," she said.

Nicaragua, on this 39th anniversary of the revolution, is facing an important socio-political crisis which aims to overthrow the Sandinista government of Daniel Ortega, as well as being stunned by the international right-wing.

"Since April, Nicaragua has been included in the plan for the destruction of the new democratic governments in Latin America, a plan that is conceived and orchestrated by the Think Tanks serving the large transnational corporations," writes Luis Varese, a Peruvian freedom fighter and captain of the Sandinista Popular Army (EPS) during the revolution, who was present in Managua on July 19, 1979.

Making a comparison between today and 1979, Varese told teleSUR that when the revolution triumphed in 1979, "the popular government started and almost at the same time the United States gave arms to the 'contra' (counter-revolution)." The possibility of progressive governments in Latin America was attacked back then, as it is being again now.

"In the early hours of July 20, 1979, dozens of trucks and hundreds of fighters traveled through the southern highway, bound for Managua. On July 17, 'el día de la alegría' (Day of Joy), Somoza had fled full of money and shame, leaving behind thousands of dead and 47 years of dynastic dictatorship, founded by his father, the murderer of Sandino. All the support of the (U.S.) 'gringos' had not been enough to contain the popular insurrection led by the FSLN.

"The Southern Front had been part of the final effort of a brilliant military and guerrilla strategy, from where the convoy came, Nicaraguan boys and internationalist fighters with eyes full of images, face blackened by gunpowder and hearts full of pride." With this image, Varese recounts the Sandinista Popular Revolution's triumph, that day, 39 years ago.

Nicaragua's revolution is one of only three triumphant revolutions in Latin America. Along with Mexico and Cuba, Nicaragua stands tall in the history of the continent as a revolutionary country.

"This is the triumphant revolution that overthrew one of the most despicable dictatorships in Latin America," Varese told teleSUR, adding that it also brought deep social changes to Nicaragua, based on a development strategy channeled by social programs.